The difficult realities are those no one wants to hear.

There was never a solution to Afghanistan. Nation-building was never going to work And the odds are that after we’ve withdrawn, Islamic terrorists are going to set up shop and begin the cycle all over again.

Americans think in terms of solutions. Or at least we used to. 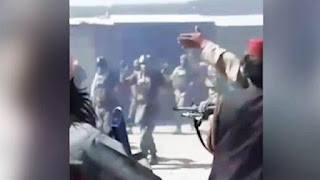 The Founding Fathers understood that we could solve our own problems. We couldn’t solve those of Europe. We still can’t.

But the flip side of the reality is that isolation only gets us so far in a world in which terrorists can hijack planes and fly them into buildings.

Or get their hands on nuclear weapons.

More than ever we think in binary and polar terms. All either one thing or another. Reality doesn’t work that way.

We need to avoid being drawn into more nation-building folly, but there will come times when we’ll need to militarily intervene to protect our interests.

Those interventions should be short and decisive. They should set a clear goal of destroying the enemy without then being drawn into a futile program of stabilizing and constructing a new system that we approve of on the rubble of the enemy.

The temptation to stabilize a source of instability is geopolitically rational, but doomed by culture. The nation-builders were right that failing to stabilize Iraq or Afghanistan meant that we would get dragged back in. It already happened in Iraq, the odds of it happening at some point in Afghanistan are pretty good.

But that means we’ll have to learn to live with an Israeli model of occasional brief interventions with low casualties rather than extended engagements. We are done with trying to replicate WW2 or Vietnam all over again. Or at least we should be.

This model doesn’t really fix anything. It isn’t any kind of solution. And as terrorists get closer to accessing more dangerous weapons, building their own drones and rockets, obtaining chemical, biological or nuclear materials through the same pipeline from North Korea to Pakistan to Iran, there may be a hell of a price to pay.

There were better decisions that we could have and should have made before and after September 11.

We didn’t make them. And that means we are where we are. Our enemies are getting more dangerous just as we’re getting weaker.

Everyone needs to adapt to a new reality horizon and work with the situation as it is. But that probably won’t happen. Instead the debate will go back to being between the same old failed intervention model or the equally failed model of insisting that if we ignore the problem, it’ll go away.

The basic crisis is simple enough.

Islamic terrorist insurgencies are expanding. A sane country would have responded to 9/11 by cutting off their sources of funding and weapons with brief and decisive campaigns targeting oil-rich states and the North Korea-Pakistan-Iran weapons pipeline.

Instead we spent our time chasing the terrorists and trying to rebuild their societies.

Wars that could have been won became unwinnable exercises in suicidal sociology. That choice may mark one of the turning points of our decline. And it came from a political culture that was unable to deal with real problems, only with ideological abstractions, run by men who thought entirely in terms of the ideas that they had absorbed in the past, and with no room left for questioning those ideas.

The only real lesson of Afghanistan is that we need to step out of the boxes and echo chambers and start seeing the world as it is, and evaluating problems and solutions the way we would tackle a broken chair or a toilet, not in ideological, but in practical terms.

If we can’t learn that lesson, then we can always debate the sex of all the angels that can dance on the heads of a pin while the Turks besiege our walls. History offers ample lessons for societies that can’t learn from the past, the present, or the future.

We ought to learn them before the barbarians aren’t just in Kabul, but on our own borders.

Anni Cyrus: Why Biden Bribing and Begging Jihadists for Mercy Will Never Work