The media is filled with absolutely worthless analyses of why the Afghan army surrendered. 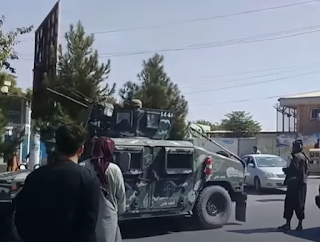 Some commentators blame the United States for not providing logistics. Others claimed that we undermined its non-existent morale. There’s hand-wringing over the 300,000 Afghan soldiers who wouldn’t fight. And the $90 billion that we squandered on building up the army that wouldn’t fight.

These analyses are just as dumb as the ones that accompanied the collapse of the Iraqi Army in the face of ISIS.

The Afghan army, like its Iraqi counterpart, was a wholly artificial western institution. When faced with a tribal crisis, its members revert to their first duty, which is going to the defense of their tribe.

Its Pashtun members surrendered to the Taliban who are fellow Pashtuns. Hazaras fled to Iran and took our equipment with them for the benefit of Hezbollah, the Houthis, and any other Shiite terrorists. The Uzbeks fled to Uzbekistan.

There’s no Afghanistan. It’s a collection of tribes whose members are loyal to their own.

The only group invested in Afghanistan, aside from the State Department, are the Pashtuns.

But the Taliban are a much more effective Pashtun bid for taking over the country than the pathetic shambles of a free and democratic Afghanistan.

And for those tribes and subtribes who want to resist the Taliban, they’ll do so because they oppose that particular tribe by siding with their tribe and the warlords leading the fight. They won’t do so while wearing army uniforms or toting around a lot of our equipment which we thought was absolutely vital to a modern armed force, which the locals aren’t culturally compatible with, but is not especially useful for raiding tactics, which the locals are quite good at.

The Afghan army didn’t surrender. Much of it never existed. The parts that did exist rejoined their tribes and are waiting for the next move which will come as the Taliban overextends itself and gets too deep in bed with the Chinese.

Our inability to understand this was the problem all along.

We insisted on building up an imaginary military for an imaginary nation. The whole farce collapsed the moment we decamped because there was no longer anything holding it together.

The people we wrongly call the Afghans reverted to who they had been all along before we demanded that they adopt the same political trappings in which we dress our political system.

Our system works well enough for us, or at least, as Churchill put it, less badly than any other system.

But the Afghans are not Americans. They’re not in it for democracy or human rights. What they want is to gain power through their tribe, their subtribe, their family, and their chosen bosses.

That’s what the war was about for 75% of them. It’s what the endless war will be about going forward.

Afghanistan is in a perpetual state of tribal warfare. We never understood that and to the extent that we did, we tried to apply solutions that the locals didn’t want and weren’t especially interested in.

Now that we’re gone, the forever war will continue without our overlay of myths and illusions.

Or at least fewer of them.

The warlords who turn to us for money and guns will talk about human rights. If we’re smart, we’ll ask them instead how many Taliban they’ve killed today.

That’s how we did things after 9/11. If we had kept on doing things that way, maybe the rest of the world wouldn’t be laughing at us.

Humberto Fontova: What the Democrat-Media Complex Isn't Telling You About Cuba