All over Southeast Asia, there are women and little girls bent over sewing machines in sweatshops churning out “Cuomosexual” t-shirts that no leftist letch will buy anymore. 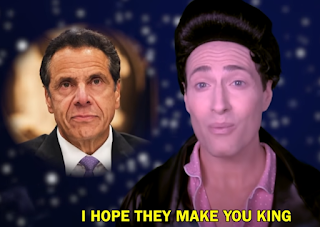 You can’t buy a Confederate flag on Amazon, or a copy of a book challenging transgender identity, but the site is littered with $20 “I Identify as Cuomosexual” t-shirts and rainbow Cuomosexual face masks. Like Andrew Cuomo, his Cuomosexual crap has no future.

Now all the Cuomosexuals know just what identifying as a Cuomosexual really means.

You can use your $285 “Cuomo for President” cashmere sweater to wrap the shattered pieces of your “Crushin’ on Cuomo” coffee mug, and use it to mug somebody on 5th Avenue.

Last year, former Governor Cuomo endorsed tearing down President Teddy Roosevelt’s statue. Now his cult of personality icons are the ones falling on his walk of shame out of Albany.

Not so long ago, they worshiped him.

The Television Academy gave him an Emmy, the Washington Post compared him to FDR, and a poll showed him leading the field of potential presidential candidates in 2024.

Like a cornered rat, Andrew Cuomo tried to do everything he could to stay in office. He blustered, he threatened, and tried to cut deals. But all the fellow rats he had climbed over on his way to the top got up on their hind legs and toppled the Beast of 138 Eagle Street.

It’s not the first time in the rat-eat-eat politics of New York.

Former Governor Eliot Spitzer refused to resign, claiming that his hooker habits were a “private matter”, until, like Cuomo, he was threatened with impeachment forcing him to get out.

His blind black replacement, Lt. Governor David Paterson, swore he wouldn’t give up the governor’s mansion, vowing, “The only way I’m not going to be governor next year is at the ballot box and the only way I’ll be leaving office before is in a box.” He left in disgrace after a covert dirty campaign waged in the media by his sociopathic successor: Andrew Cuomo.

The race is on to replace Cuomo with another scumbag who will quit before being impeached.

Cuomo wasn’t just afraid of impeachment. There are much worse things lurking in his closet than the knobby grabby hands and the maniacal leer that splits his leathery face. The Democrats didn’t want to open that door and neither did Andrew Cuomo. Call it a cover-up.

That’s what it is.

Andrew Cuomo brought half a century of Cuomo clan politics to an end with his shameful resignation. Ever since Mario Cuomo ran for office in 1974, there’s been a Cuomo robbing taxpayers somewhere in New York or D.C. Before Mario lost his last race, he got his son Andrew a job as HUD Secretary in the Clinton administration as a payoff for not opposing him.

A world without Cuomos is almost as unthinkable for New York as a world without Kennedys for Massachusetts. The two inbred political clans even briefly intermarried when Andrew Cuomo wed one of RFK’s daughters as part of his presidential ambitions. Those are as dead as the thousands of senior citizens who perished after Cuomo ordered nursing homes to accept hospital patients infected with the coronavirus while blaming the outbreak on the Jews.

The Clinton cabinet is where Andrew first began to be accused of sexual harassment (while the sexual harasser in chief covered for him) and where he became the “Father of the Subprime Crisis” which helped cause the economic recession of 2008 that brought Obama to power.

Biden praised Cuomo for having done “one hell of a job”. He’s right.

Between the 15,000 nursing home coronavirus deaths in New York and the 2008 economic crisis, Cuomo may have done the most damage of any politician not in the White House.

If Andrew Cuomo had not existed, the history of the last two decades might have been very different and the Obama and Biden administrations might not have become terrible realities.

But unfortunately he did exist and he didn’t resign for any of his real crimes, but for sexual harassment which is practically a rite of passage for New York Democrats.

When New York Democrats aren’t stealing, they’re groping, or they’re doing both at once.

Eliot Spitzer, the last Democrat governor to come into office through direct elections, stepped down for sexual misconduct. Cuomo’s predecessor as attorney general, Eric Schneiderman, resigned after being accused of choking women, but a Cuomo appointee refused to prosecute him. New York City Comptroller Scott Stringer tanked his mayoral campaign after being accused of sexual harassment. Former mayoral candidate Anthony Weiner had sexted a 15-year-old girl.

Vito J. Lopez, the chair of the Brooklyn Democratic Party, had to resign for groping female staffers. Micah Z. Kellner, a bisexual Schumer crony, lost his political career over sexual harassment and had to divorce his wife, Anthony Weiner’s former chief of staff.

In New York politics, it’s scumbags all the way down.

While Biden’s crony, Attorney General Garland, has pushed political lawsuits against Texas, for trying to stop illegal aliens released by Biden from spreading COVID, and at Phoenix, for trying to stop homeless squatting, the DOJ has refused to investigate New York’s nursing home deaths. Unlike the rights of illegal aliens and the homeless, the deaths of 15,000 grandmas and grandpas are not a “civil rights issue” to Biden, Garland, and the rest of the Democrat machine.

By resigning, Cuomo and the whole corrupt system he headed evade accountability for the nursing home deaths, for coronavirus coverups, and for the system that protected Harvey Weinstein, Jeffrey Epstein, and every monster with a ready checkbook for Democrats.

Like so many other political offices in New York, Cuomo’s will be filled by a woman. Lt. Governor Kathy Hochul is apparently the only woman in Albany whom Cuomo didn’t get around to groping. New York’s female Democrats are as crooked as their male counterparts, but they are less likely to shove their sweaty hands where they don’t belong. That glass ceiling remains.

What New York Democrats need is a real reckoning. And that’s what Cuomo’s quitting avoids.

Cuomo was a monster, but, like Bill Clinton, his treatment of women was a symptom of a much worse sickness. As civil rights vanished in blue states with rising coronavirus case numbers, he got to play out his worst megalomaniacal fantasies. People died and communities were terrorized. There was no accountability and there still isn’t. And there never will be.

Instead of a real investigation of his crimes, Cuomo goes down as just another in a legion of Democrats, in the state and across the nation, who couldn’t keep their pants on. The parade of young female staffers sitting down for teary interviews may be real victims or they may not be, but the studios are haunted by the thousands of ghosts who truly belong in those chairs.

The nursing home patients who choked out their last breaths courtesy of the Luv Guv couldn’t make it. And none of the heavily made up anchors interviewing the women whom he pawed could spare a minute to talk to the children and grandchildren of the Cuomocides.

But wherever Cuomo goes to live out his decades of disgrace, the ghosts will follow him.

There is a higher justice than the miserable corrupt thing that New York’s political, judicial, and media system can dole out. It can bring down even the greatest of men at the height of their power, turn their icons to dust, and nothing can stand in its way. Not even Andrew Cuomo.

Starfleet, We Have A Problem: A Look at a Few Questionable Star Trek Characters