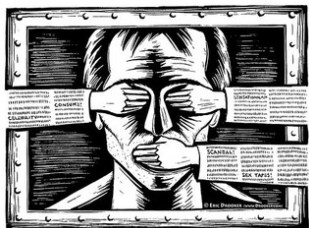 White House spokeswoman Jen Psaki warned that her administration was “flagging problematic posts for Facebook” and urged, “you shouldn’t be banned from one platform and not others.”

Psaki was not just advocating a theoretical approach, but discussing the shared infrastructure built by Big Tech monopolies, the United Nations and assorted governments for doing just that.

In his PJ Media article, Tyler O’Neil dug into the Global Internet Forum to Counter Terrorism (GIFCT) which is funded by Google, Facebook, Microsoft and currently chaired by Twitter. Its advisory committee members include the United Nations, the European Union, and the British, French, and Canadian governments as well as the National Security Council in the U.S.

GIFCT had been set up by the industry in response to pressure from governments to remove Jihadist propaganda, but its Hash Sharing Consortium, a secret database of terrorism content to be immediately removed when its 13 dot com companies come across it, is secret, and so there’s no way for anyone to know if they’ve been targeted and no appeal from the secret list.

The creation of a secret “No Fly List” for the internet by the biggest monopolies which control over 80% of social media content and much of the self-created video content on the internet would be troubling enough, but by 2019, Facebook, Twitter, Google, Microsoft, and Amazon had joined the Christchurch Call which advocates not just banning terrorist material, but fighting its root causes by strengthening “inclusiveness” and fighting “violent extremism”.

To that end, the Dynamic Matrix of Extremisms and Terrorism (DMET) was deployed which goes through 4 different levels beginning with “partisanship” and ending with terrorism. DMET defines the initial levels of violent extremism as using “dehumanizing language” which can be described as nearly any criticism of a group.

Big Tech has built its own matrix. And we’re all in it.

As O’Neil documented the resulting “matrix” is a dangerous and bizarre list which classifies Sinn Fein and the Scottish National Party, alongside NARAL and “Anti-Vaxxers” as partisans on the first level of DMET. It’s unclear what a top pro-abortion group, the ruling leftist party of Scotland, the political face for the IRA, and opponents of vaccination have in common, but out of such confusingly disparate material, Big Tech has built its censorship matrix.

At the second level, alongside Neo-Nazi groups like Combat 18, the Bundy Family (a family, not an organization) and the Animal Liberation Front, which actually is a terrorist organization, is Jihad Watch.

The respected counterterrorism blog by historian and researcher Robert Spencer and his associates (I have been among them) has been an invaluable resource for chronicling Islamic terrorism and colonialism and represents the opposite of violent extremism.

As Robert Spencer wrote on Jihad Watch, “This is pure libel. We have never advocated or approved of any violence or any illegal activity of any kind.”

The DMET is just a more sophisticated pseudoscientific database of the kind that the Southern Poverty Law Center, whose materials have contributed to it, has deployed over the years.

One such database listed my blog, Sultan Knish, as a hate group, alongside a brand of gun oil, and a bar sign in Pennsylvania. These databases may have a Kafkaesque absurdity, but the consequences to lives, livelihoods, and careers are all too real with my blog showing up on the Color of Change list pressuring Big Tech monopolies to cut off funding and access to my site, as well as Jihad Watch, the David Horowitz Freedom Center, and many other conservative groups.

Big Tech companies have begun building their own databases in coordination with governments. And these secret databases determine who has access to the public square of the internet, who can earn a living, and who ends up being deplatformed and unpersoned.

“If we are ‘extremist,’ so is the U.S. Constitution, for we are trying to defend the freedom of speech, the freedom of conscience, and the equality of rights of all people before the law,” Robert Spencer wrote. But DMET, GFICT, and other interfaces between governments and tech monopolies aren’t using the Constitution. They’re censoring based on United Nations law.

When Facebook’s Oversight Board issued its verdict on censoring President Trump, it did not list a single item of United States law, including the First Amendment, but cited the Rabat Plan of Action, and articles of the UN’s International Covenant on Civil and Political Rights (ICCPR).

GFICT’s DMET matrix cites the Rome Statue of the International Criminal Court to declare that preventing “dehumanization” is an “imperative under international law”. Like Facebook’s decision to censor the former president, there’s no mention of the Constitution, but international law is repeatedly cited. Most disturbingly, a GFICT attempt to define terrorism collates a variety of definitions including attacks “against social cohesion” which the UN itself has noted is used to censor speech and political opponents as well as efforts to suppress Mohammed cartoons.

Tier 4 of the Content Taxonomy for what gets censored by Big Tech includes only one example targeting a group: “fear of Muslims is rational” thereby essentially banning most counterrorism, advocacy against unlimited immigration as well the Trump political campaign.

Big Tech monopolies are no longer just enforcing local laws, moderating content in America or in the European Union based on the different standards in each country, instead all speech on the major platforms is being policed in line with the United Nations and its “international law”.

No black helicopters or blue helmets were needed. United Nations law came to the United States through the Big Tech monopolies that we turned over our speech and economy too.

Facebook now censors a former president in line with UN regulations. And censors all of us too.

GFICT is another example of UN regulations controlling our speech. We’re all drones living in the UN’s “Matrix” now as companies more powerful than governments impose international law.

Big Tech’s censorship matrix targets Robert Spencer and critics of Islam because censorship of dissenting religious views has been a longtime project of Islamic groups within the UN.

“They have all the power, and they mean to shut down dissent, and that means our days here are numbered,” Robert Spencer wrote. How long will it be until Did Muhammad Exist? Did An Inquiry into Islam’s Obscure Origins, the newly revised and expanded version of Spencer’s classic work, is censored the way that Amazon, which dominates the ebook market, suppressed Ryan T. Anderson’s When Harry Became Sally: Responding to the Transgender Moment.

Libertarians and some establishment conservatives keep protesting that private companies have the right to censor whom they please. But the UN is the opposite of a private company.

When massive monopolies act in concert with governments and multinational alliances, like the EU and the UN, to eliminate free speech in line with UN international law, that’s not private action. If we don’t have the courage to confront the ‘matrix’ of big governments and Big Tech, of Google and the UN, or Amazon and the EU, we will lose our rights, our identity, and our nation.

Anni Cyrus: Why Biden Bribing and Begging Jihadists for Mercy Will Never Work