It’s not just the rising prices and loss of hope that makes the Biden administration feel like a rerun of the Obama administration. In the birthplace of the Arab Spring, the same sorry drama is playing out after popular protests once again ousted the Ennahda Muslim Brotherhood plotters who keep trying to take over the country, while the usual suspects in D.C. are fuming.

“If we believe in democracy and human rights, we should be loudly decrying the current assault on democracy in Tunisia—the heart of the Arab Spring. If Tunisia’s president does not reverse course, we should suspend all security aid,” Rep. Ilhan Omar ranted. 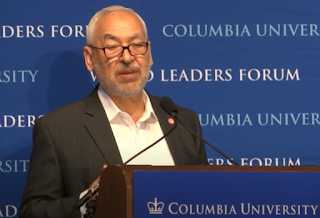 Omar then promoted the Stop Arming Human Rights Abusers Act (SAHRAA) as a means of cutting off security aid to Tunisia. Since Tunisia uses security aid to fight Islamic terrorists, like those who attacked our embassy in Tunis on September 11, 2012, her bill would aid Islamic terrorists, including Al Qaeda, and put American lives in Tunisia at risk.

It should surprise no one that Ilhan Omar is once again trying to empower Islamic terrorists.

“Tunisia’s democracy is at risk. The US position must be clear: Tunisia’s Parliament must be allowed to resume its duties immediately,” Rep. Rashida Tlaib tweeted.

But it wasn’t just the members of the Squad rushing to bail out Tunisia’s Islamists.

Senator Chris Murphy, who serves as little more than an Iranian mouthpiece, blamed the popular protests that ousted the Ennahda Islamists on a plot by Iran’s enemies.

Senator Lindsay Graham, the Muslim Brotherhood’s leading GOP enabler, jumped in crying that, “This is the place where the Arab world’s movement to representative government and democracy began, and it’s clear to me indecisiveness in the face of aggression is just going to destroy this movement. The United States and the Western democracies need to be all in, on the ground in Tunisia, stopping this before it gets out of hand.”

The last time Lindsay wanted us to be all in on the ground, ISIS got its own country.

A Washington Post op-ed by Josh Rogin attributed to Graham the worry that without American intervention, “pro-democracy leaders in the region such as Ghannouchi will be left to fend for themselves.”

It would be tragic if Ghannouchi, the genocidal monster who had declared that, “there are no civilians in Israel. The population—males, females and children—are the army reserve soldiers, and thus can be killed,” were to be left with no support except from Qatar and Iran.

Rogin, who recently appeared at a McCain Institute event, agonized that “Tunisian police stormed the headquarters of the news organization Al Jazeera” and that “protesters looted the offices of the moderate Islamist Ennahda party.”

Al Jazeera isn’t a news organization. It’s a political arm of the Qatari regime whose mission is lobbying for Islamists and imposing regime change across the region. Ennahda is every bit as moderate as the “moderate Islamists” in Egypt, Syria, and Libya the paper told us to support.

Anyone who remembers the lies which Arab Springers used to trick Americans into supporting Morsi and the Muslim Brotherhood in Egypt, and then the Brotherhood and Al Qaeda militias in Syria and Libya, will not be surprised to learn that it’s a repeat of the same disastrous hoax.

Tunisia was the original testbed for the Arab Spring. Before the Muslim Brotherhood seized Egypt in a brief coup and Obama illegally invaded Libya, the Arab Spring began in Tunisia when an illegal street vendor claimed to have been slapped by a female police officer. The slap heard around the world never happened, but it was used to trigger protests, riots, and the Arab Spring.

The media cheered the takeover of Tunisia by the Islamist Ennahda party. Sheikh Rashid Ghannouchi of the local Ennahda Muslim Brotherhood movement was feted by the Obama administration. The Washington Post called him “visionary”. It still does.

On September 11, 2012, a wave of Islamist attacks against American diplomatic facilities began in Arab Spring countries. While the Obama administration and the media lied and blamed a YouTube video, these were organized campaigns by Jihadists with the sanction of the new regimes that Barack Obama and future Biden administration officials had helped bring to power.

When the Islamist attackers linked to Al Qaeda breached the outer walls of our embassy in Tunis, scaling them and waving their black Jihadist flag bearing the supremacist message, the Islamist regime shrugged. With the embassy on the verge of falling to the terrorists, Secretary of State Hillary Clinton had to call President Moncef Marzouki, a political rival of Ennahda, and plead with him to send out his presidential guard and save the embassy staff.

The presidential guard stopped the assault while receiving little thanks from Hillary or the media which went on falsely claiming that the assault by the Okba Ibn Nafaa Brigade, an affiliate of Al Qaeda, was a political protest in response to a YouTube video about Mohammed.

Does Rep. Omar want to see another repeat of Benghazi in Tunisia? Does Senator Graham?

Despite the best efforts of the Obama administration, the Ennahda Jihadist regime was ousted by popular protests in 2013 after the assassinations of secular leaders by Islamists. The killings were linked to a key figure in the Benghazi attack on the American diplomatic mission in Libya. (All the evidence that the September 11, 2012 attacks were a coordinated terrorist assault by some of the same players has not stopped the media from repeating the YouTube video lie.)

After being ousted, Ennahda bided its time. Meanwhile the violence continued. Last summer, while Americans were understandably distracted, Islamic terrorists blew themselves up near the American embassy in Tunis. It was a continuation of the Jihadist plots to seize the country and kill non-Muslims and secular figures. The Tunisian security forces tasked with fighting the Jihadists were steadily being infiltrated by a Muslim Brotherhood deep state.

While its deep state was growing, Ennahda had adopted the Hezbollah model of operating through political front men to avoid triggering the same response that had previously forced it out of power. Tunisia was being hollowed out by the Muslim Brotherhood with its politics and its security forces having become puppets in the hands of an Islamist secret society of killers.

But once again Ennahda overplayed its hand and a new wave of popular protests exploded.

The massive rallies this year targeted Ennahda offices and called for the government led by its latest front man to be dismissed. With the mask of secret Ennahda rule stripped away and its puppet out of power, Washington D.C. and the media rushed to defend “democracy”.

And by democracy, as usual, they meant Islamist rule, open or covert.

Most local coverage in the region has been outsourced to Qatar’s Al Jazeera and the media has followed its Islamist line of accusing Tunisia’s president of undermining democracy. That. not at all coincidentally, is the same rhetoric coming from the Squad’s Islamist mouthpieces on the Hill.

But Ennahda was forced out of power, once again, by popular protests.

Whether in Tunisia or Egypt, the Muslim Brotherhood was only forced out of power in the wake of massive popular protests. Islamists claim that popular protests sanction a change of government when it brings them to power, but not when it topples them from power.

The media upholds this same cynical line of reasoning without ever challenging it.

“Democracy is like a streetcar. When you come to your stop, you get off,” Recep Tayyip Erdogan, Turkey’s brutal Islamist tyrant, once reportedly said.

To Islamists, popular protests are also like a streetcar. They board them once they begin and then suppress them once they take over. The message of the Tunisian street to Ennahda, not to mention Omar, Graham, and Tlaib, is that it will never be allowed to work that way.

The Biden administration, to its credit, has avoided Obama’s eagerness to aid the Brotherhood.

That’s why the Washington Post’s Rogin op-ed was titled, “Biden must try harder to stop the coup in Tunisia”. The Biden administration remains sympathetic to Iran, but it’s too busy wrecking America to spare much attention for the rest of the world. The recent international trips by Biden and Kamala Harris demonstrated that both are weak leaders in no shape to either lay out a foreign policy or project strength abroad. The Biden administration continues to enable Jihadists from Israel to Afghanistan to Iran, but its appetite for confrontation remains limited.

By Syria, even Obama had lost his appetite for military intervention on behalf of the Muslim Brotherhood. The Washington Post remains the final outpost for the Arab Springers who have turned Jamal Khashoggi into their Horst Wessel and keep touting the “moderate” Brotherhood.

Most Americans of both parties, even in Washington D.C., have ceased to pay any attention.

The calls by Omar, Tlaib, Murphy, and Graham should be met with the contempt that they deserve. Ghannouchi is a monster, not a moderate, and Ennahda, like its other Brotherhood counterparts, keeps being toppled by secularists and pragmatists, leftists and unions.

Any Republican legislators in D.C. who are tempted to join the Omar’s Brotherhood bandwagon might want to remember how Egypt, Libya, and Syria’s “democratic revolutions” ended.

And stop trying to put Tunisia’s Islamists back in power.