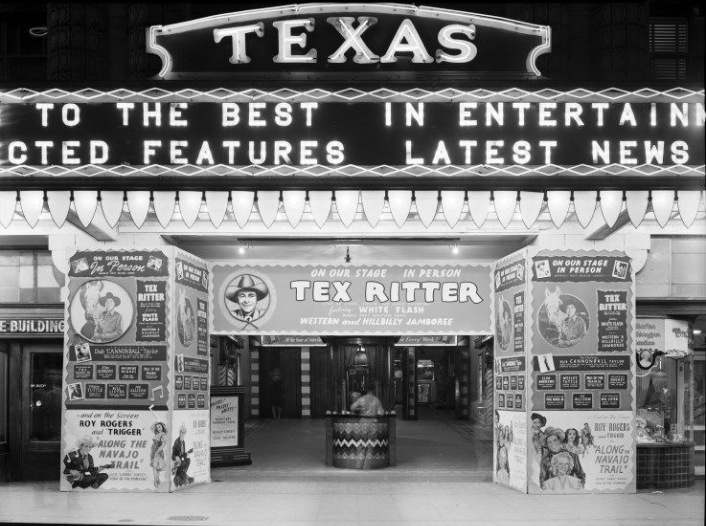 In the small town of New Market, Virginia, where my parents and I moved when I was age ten, I found an amazing time machine. Not like the one H. G. Wells described or one you found in any science fiction movie or TV show; it was a plain building in the center of town. There was a glowing marquee out front announcing what would be going on inside. Inside, a large screen presented visual stories to take you to the past, the future, or anywhere in the world it saw fit.

This was the New Market movie theater, and there I learned a great deal, sometimes more than in school or even church. While teachers, pastors, Sunday school classes, and parents could explain right and wrong, the visual images on the screen in the 1940s could wrap a kid’s mind around these concepts and which were the better choices to make. It was there that I was introduced to B westerns and the likes of Gene Autry, Hopalong Cassidy, Lash LaRue, Sunset Carson, and my favorite, Roy Rogers.

Roy Rogers, the King of the Cowboys, and his faithful horse, Trigger, never failed to show good winning over evil, honesty being paramount, and how you should treat your fellow human beings. I was thrilled to learn years later that this man and his Queen of the West, Dale Evans, were the real thing. They of course knew that the real king is Jesus Christ.

It is amazing the influence that films can have on our lives and sometimes amusing. In the early 1930s there was an Academy Award Winning film It Happened One Night that influenced men in America. The leading man was Clark Gable and there was a scene when he takes his shirt off. Gasp! No undershirt. Undershirt sales plummeted. American men thought Gable was revealing real manliness.

As a kid I went to films at last once a week, This did not end when I did my undergraduate work in College. I probably would have been a better student had I spent less time going to films. However, during my freshman year in college there were three films that influenced me greatly and to which I give credit for my committing my life to Jesus Christ.

The Robe was a big-screen hit based on a novel by Lloyd C. Douglas. Starring Richard Burton, Jean Simmons, and Victor Mature, it dealt with what happened to the Roman centurion responsible for the crucifixion of Jesus Christ. Burton as Marcellus Gallio, a disillusioned Roman officer, is one of the soldiers who gambles for the robe Jesus Christ wore. After winning it he becomes obsessed with what he thinks is the robe trying to kill him. His slave Demetrius (Victor Mature) is a man of faith and takes possession of the robe. There is one scene that in my opinion is one of the best ever handled by Victor Mature. He is at the foot of the cross, observing Christ and hearing the things said by Him. Mature’s face, with tears running down his cheeks, brings home to the viewer the whole event. Later in Rome, Marcellus is commissioned to come back to Jerusalem to investigate stories of the Savior being resurrected. When he meets up with his ex-slave, Demetrius, and Simon Peter, his life is changed. His new faith is tested when he and his fiancée, Diana (Jean Simmons), must face the bestial Caligula, who considers himself a god.

The second film followed a different line entirely. I’d Climb the Highest Mountain is the story of a young city girl, Mary Elizabeth (Susan Hayward), who marries a young Methodist circuit-riding minister, William Thompson (William Lundigan), who takes his first assignment in the Blue Ridge Mountains of Georgia. The film is from a novel by Corra Harris and partially based upon her own experiences as the new wife of a circuit-riding minister. Though largely dramatic, there is also comedy as Mary Elizabeth has to adjust to rural living as a minister’s wife. While set in 1910, it deals with issues that could as easily relate to twenty-first-century churches. Why do bad things happen to good and innocent people when we have a merciful and loving God? This is beautifully portrayed, and it is one of Susan Hayward’s best acting jobs.

I had corresponded with Susan a few years before this film came out, and a few years later she admitted something: “I fell in love with Georgia and the people.” She eventually married Floyd Eaton Chalkley, a Georgia rancher and businessman who had formerly worked as a federal agent. This was quite a change for a five-time nominated and onetime winner of the Academy Award for Best Actress. During her lifetime she donated money to hospitals and other charities in Georgia.

The movie that had the greatest impact on me was A Man Called Peter, the Peter Marshall story. It was based on a book by Catherine Marshall that celebrated the life of a Presbyterian minister who was Scottish born. As a lad in Scotland, a miracle led him to accepting Jesus Christ, coming to America, and studying for the ministry. That ministry began in Georgia and then took him and his wife, Catherine, to the prestigious New York Avenue Presbyterian Church in Washington, DC. Some described it as a “for high classes only church.” It was a church that former presidents had attended. Marshall transformed this church into being one truly for all the people, and near the end of his life he was appointed chaplain of the US Senate.

What is striking about A Man Called Peter is how actor Richard Todd speaking Marshall’s words in sermons and in his everyday life resonates with the film audience. Jean Peters, as Catherine, does a good job in a sermon of her own to young people that wins Peter’s heart.

My wife Carolyn and I visited the Washington, DC, church several years after Peter Marshall’s death and found that his influence, which was always guided by the Holy Spirit, was still there. At the end of the sermon we were surrounded by church members wanting to meet us and to invite us to their homes for dinner. The atmosphere was what you would expect more in a small country church than in one that was in the center of the nation’s capital. After seeing the film I immediately had to locate and purchase books of sermons and prayers by Peter Marshall. I knew that I could no longer be a Christian in name only; I needed to commit my life to Jesus Christ.

I will not pretend that these films were made by and starred in by people who were Christians. Their motives are not important, as I agree with C. S. Lewis that authors do not necessarily have full control of what they write, and I believe the same is true of filmmakers. Lewis also believed that the Holy Spirit can and will at times guide our interpretations of what we see. This can lead us to seeing God. Lewis himself was originally a nonbeliever, but his study of mythology and world religions made him first accept God and then Jesus Christ. Today we have many Christian filmmakers who pray each day about the work they are creating for the screen.

There are a number of stumbling blocks up against Christian film makers and it is hard to get their films recognized with Hollywood having gone WOKE. Fortunately Hollywood is no longer the film capital and many good films are being made in states outside of California. Christians who care about meaningful faith and family films have a major responsibility. What they can do ranges from helping film makers raise money to helping get the word out about the productions. In the future, if acceptable by my favorite publication, I hope to talk about films coming out that once again parents can feel free to take their children to.

'Saving Afghan Interpreters' is a Scam That Would Bring 100,000 Afghans to the U.S.