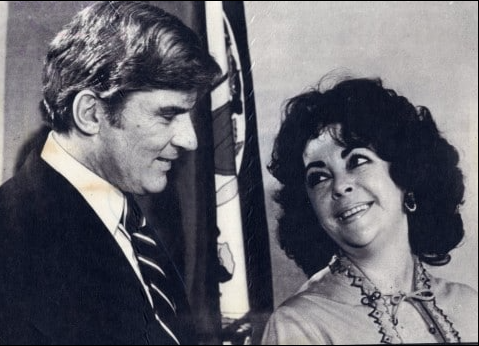 Despite electing two Republican governors in the1960s Virginia in the ‘70s was still regarded as a part of the old solid South. The influence of former US Senator Harry Byrd was still very strong controlling most state and local offices under what many of us labeled The Byrd Machine.
That changed in 1977 when my family and I got involved in a campaign for the US Senate by former Secretary of the Navy John Warner and his wife, Academy Award–winning actress Elizabeth Taylor.

There were people who, knowing I loved films, accused me of supporting John Warner because of his wife. Nothing could be further from the truth. While we liked her films, she was not our favorite actress. My wife Carolyn and I were invited to a reception to meet and hear John Warner.

We were a bit late and he had already begun his speech. We were both struck by how this man looked and handled himself. Hollywood central casting could not have picked someone better to run for office. His background and knowledge were evident as he spoke, and before we even met him we knew we could support him as a candidate for the US Senate. The reception line was afterward, and I happened to be on a cane (I had been using canes for over a decade). The cane I picked for this event had a carved elephant, and it seemed appropriate for a Republican gathering. When we got to the couple, Elizabeth enthusiastically wanted to see it, as she was very familiar with Kenya, where it was made. That led to a short conversation about why I needed a cane and how I had gotten that particular one.

It was shortly after that I found what an amazing draw Elizabeth was to fans and how many were in awe of her. At my school where I taught the next day a secretary and a teacher asked me to bring that cane in after they heard Elizabeth liked it. Both wanted to be able to say they had touched a cane that Elizabeth Taylor had touched and admired.

We became fans of hers not as an actress but as a friend, and she won us over a couple of weeks later at a special dinner of local Republican leaders we were invited to attend. We were seated at a long table, and across from me was a lady high up in party ranks who made it a point to say to me, “I want people to know that I cannot be partisan right now and I would not have come had this not been dutch treat.” I couldn’t help but reply, “I thought that meant some big Dutchman was paying for this.” The lady replied in a haughty voice, “Ha-ha. There, you got your laugh, Fred.” Then clear as a bell from the end of the table, Elizabeth said, “Well, I laughed.” That won us over.

I soon agreed to serve as chairman of John Warner’s campaign for the Sixth Congressional District of Virginia.My whole family was involved: our daughter, Carol, served as an aide when they were in the area, and our son, Fred, was their official photographer. This led to a year of working for John’s election, and there were many interesting times ahead for Carolyn and me.

I soon learned that there is some truth to the idea that politics and the entertainment world have similarities. Elizabeth Taylor herself told us this and it proved to be true. was a get-together one evening in Roanoke to hear John Warner speak, and the place was packed. Before he started speaking one of his aides came to me and said, “Fred, we have a heavy schedule tonight. So about seven please interrupt John and explain that John has to leave.” I agreed. At seven thirty sharp, I stood up and announced, “This has been a wonderful reception; however, John has to get to another one this evening.” John interrupted me, saying, “No, no, Fred. I am enjoying talking with these folks. I will stay as long as they would like.” Some in the audience gave me looks like I was a villain.

Two weeks later I had Elizabeth Taylor set to speak at my school, and the auditorium was full. She had come in by private plane, and I had been told on the phone by a young lady who worked with her, “Elizabeth can only stay an hour and has to be back for a program this evening.” Though she made a big hit with the audience, I paid close attention to my watch. When it looked like I would have just enough time to get her to the airport, I walked over to the podium, announcing that we would have to leave. Elizabeth looked at me sweetly and said, “No, no, Fred. I am enjoying talking with these folks. I will stay as long as they would like.” I could only laugh and went back to my seat. I never did find out who taught who that technique. Did John or Elizabeth suggest that to the other? It was effective.

Elizabeth liked to tell Carolyn about life at Atoka Farm, where whey lived in northern Virginia. She had a baby lamb that was her pet, and she carried pictures of her bottle feeding it. One evening when there was a dance in Roanoke, we needed two cars because Carolyn and I would not be staying long. I remember well John and an aide in the front seat and Carolyn and Elizabeth in the back of one car while I followed in my car. It flashed through my mind that had you told me twenty years before I would someday have a lovely wife I would be following in a car with a future US senator and Elizabeth Taylor, I would have said you were out of your mind. She insisted we stay for the dance as friends and for her and John to dance with.

As I got to know Elizabeth there were things I wanted to ask about Hollywood and one topic in particular. For years I had seen all kinds of publications with the most outrageous stories covering film and TV stars. I had to ask if that bothered her, as conventional wisdom said that for stars even bad publicity was helpful to their careers. Her answer was telling.

“It really hurts,” she admitted, “and in this country there is nothing I can do about it. One magazine actually ran a front-page story that I was killing my mother. The article was based on my mother worrying about my welfare. They get by with insinuations and I cannot sue. In England I can, and I have won fifteen times against publications. I didn’t need the money, I just wanted retractions.”

I am sure that all her life there have been stories about her and others in the public eye that were exaggerations and often completely untrue. Years after we worked with Elizabeth Taylor here, there was a book out on her life. In one chapter it told of a “rip-roaring public fight” Elizabeth and John had at a particular function. We were with them at that time, and it did not happen. No mention in those stories about how she liked working with young people and she even established a drama scholarship for Virginia high school seniors.

John won the election and went on to serve more terms afterward. During the first couple years Elizabeth would go to the Senate chambers when in session and they would blow kisses to each other like newly weds. During this time John Warner with his wife at his side worked tirelessly to build a strong Republican Party in the Commonwealth of Virginia.

Sadly, the marriage did not last, though it was longer than any past marriages she had had. John was married to the Senate and Elizabeth definitely was in second place. Their split likely came about because being a Washington wife can cause a great deal of stress. One classic example was Betty Ford, wife of President Gerald Ford, who became an alcoholic. This led to the founding of the Betty Ford Clinic.

Even after their divorce, Elizabeth and John remained good friends until her death, and whenever she had to be in Washington, she stayed at Atoka Farm. During those visits she made it a point to check on things around the estate, as a good wife to a ranch owner would.

Now sadly Elizabeth was more conservative than her husband and more active in campaigning for Governor Ronald Reagan to win two terms as president of the United States. This writer never understood while as a retired citizen and Georgetown resident John opposed Donald Trump the very man Elizabeth would have supported as she idolized the memory of her late husband Mike Todd, a businessman who knew and was like  Trump.