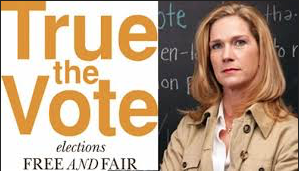 This was originally published on August 4, 2021. Since then, they finally got her…Catherine Engelbrecht was recently jailed for her continual work to secure elections for all Americans. The headlines are calling her an ‘election fraud conspiracy theorist’. Few Republican politicians publicly stood up to help her. But after yesterday, many people who stood in impossibly long lines or were told the machines she fought so hard to repair were broken might understand why Catherine fought as hard as she did–for all of us.

For more than twenty years, the United States military and militaries of countries around the world have used “Information Operations” or IO’s as a way to “capture the hearts and minds” of the adversary and influence the population of a target to win the war.  From Iraq to Afghanistan to Ukraine, we do it and do it well.

The purpose of IO’s is not to provide a perspective, opinion, or layout of a policy. It is defined as the ability to make audiences “think and act” in a manner favorable to the mission objectives. To “take action.”  This is done by applying perception management techniques that target the audience’s emotions, motives, and reasoning.

The same type of IO is being run here, in the United States – except it’s a “non-partisan” IO designed to protect the establishment, and to smash insurgents and those who seek to expose the corruption and criminal activity such as vote trafficking.

What we are witnessing today, with the failure of federal judges to even allow for the merits of legal challenges alleging voter fraud to be heard (which to be honest, we have sometimes scratched our heads at as well) or the suppression of evidence concerning election integrity is unconscionable and anti-American.  The blacklisting of the Hunter Biden story and the de-platforming of then President Donald Trump are the result of a seismic IO that has been applied politically to the country’s population.

Who’s responsible?  It’s hard to say definitively but we get closer to exposing them every day.

It’s important to remember – the techniques used in an IO are not meant to foster debate.  They are built to overwhelm and change the target’s psyche.  Using these techniques, information sources can be manipulated and those that write, speak, or think counter to the objective are relegated as propaganda, ill-informed, or irrelevant.  And if they are too powerful, they are targeted and “taken out.”

Sound familiar?  For years now, True the Vote and other leaders who have worked to restore America’s confidence in our electoral system and urge the public to act, have been targeted and smeared in a very sophisticated, strategic, and coordinated effort.  (As part of the True the Vote family, you should feel good and wear the smears as a badge of honor!  You and the thousands of volunteers who define True the Vote have been effective and the attacks are to be expected).  The smears and attacks are part of a long-term IO designed to silence and delegitimize effective groups that our opponents dismiss.

Early on, one of True the Vote’s loudest critics and attack dogs was Color of Change co-founder, Van Jones, who now has his own show on CNN.  Last week, after he landed his rocket, America’s wealthiest man, Jeff Bezos, awarded Jones $100M for “courage and civility.”   Less than a week later, billionaire George Soros made a $1M donation to Color of Change, who’s primary campaign is to “defund the police.”

To be fair, recently, Jones has done good work to unite Republicans and Democrats in support of criminal justice reform.  But early on as founder of Color of Change, Jones was one of the most divisive forces around when it came to election integrity, attacking True the Vote and other effective leading organizations.  And as an African American leader, he played a key role in the Information Operation by smearing the organization to associate the desire for election integrity as somehow being racist.

To optimized an IO, it must be integrated into all forms of society – government, media, Big Tech, Hollywood, our educational platforms, and the judiciary.

Just think about this for a moment.  When you see FOX News, top Congressional leadership in the Republican party, the FBI, CIA, and others in the intelligence community, and Big Tech all colluding to vilify and dismiss all election integrity criticism or inquiries, you can be sure that an Information Operation has been effective.  It’s the same thing as the hysterical push for vaccinations around COVID-19 and the blacklisting of early treatment and medications like Ivermectin and monoclonal antibodies (that Trump took to recover).

One more example?  Hunter Biden’s laptop.  Glenn Greenwald, the Pulitzer Prize-winning journalist who broke the mass government domestic spying story when Edward Snowden blew the whistle, resigned from the media outlet he co-founded, the Intercept, because his editors wouldn’t even let him report on Hunter Biden!

When Trayvon Martin was shot a few years ago which gave rise to Black Lives Matter, the movement and its actions were treated as straight up news.  But today, you can rarely find one negative story concerning the BLM movement despite the destruction to physical property and defacing of monuments and statues – some of those statues being actual Civil Rights champions!

Across the board, because of the power of this IO, journalists are no longer journalists and have abandoned all objectivity.  They are activists and tools of the establishment.  Judges are too afraid to challenge anything that will go against the grain of the establishment narrative.  No one can utter anything challenging that narrative on social media without getting de-platformed, and the media blacklists everything from WikiLeaks to Early Treatment for COVID and dismisses those fighting for election integrity as baseless or conspiracy theory oriented.

Four our part at True the Vote, we have a few surprises in store for you that we are positioning to blow the lid off the whole operation.  From FOIAs, to investigations,  to a soon-to-be-announced data set, the fireworks are about to launch.

One thing is clear, at the end of the day, if we are going to sustain change and truly have election integrity, we need you and everyone to raise your voices and become part of the counter-op.  After all, we are up against an Information Operation designed to make a population “think and act” a certain way.  Let’s push back with the truth.  Push back and do not stop.