During the 2007 Dem primaries, Biden attacked Obama for adopting his position on Afghanistan. 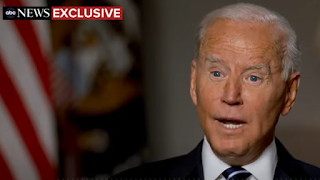 The flailing Biden campaign put out a press release accusing Obama of being a “johnny-come-lately” who had belatedly adopted Biden’s push for “significantly increasing reconstruction assistance” and sending more American soldiers to Afghanistan.

While running for president, Biden had based his entire foreign policy around sending more troops to Afghanistan. He had memorized one line, “if we’re surging troops anywhere, it should be in Afghanistan”, and repeated it in the Senate, in interviews, and on the campaign trail.

Sending more troops to Afghanistan, he argued would give America “the moral high ground”.

“The next president of the United States will have to rally the American people and the world to fight them over there, unless we want to fight them over here. But the over there is not, as President Bush has falsely and repeatedly claimed, in Iraq, but it’s rather in the border areas between Afghanistan and Pakistan,” he insisted at the Council on Foreign Relations.

Biden attacked not only Democrat rivals like Obama, but also President Bush, for not wanting to send more troops to Afghanistan. “I asked the commander of British forces how long his people would allow him to stay in Afghanistan. And he said, ‘Senator, we Brits have an expression. As long as the big dog is in the pen, the small dogs will stay. When the big dog leaves, the small dogs leave as well.’ Well, guess what? The big dog left in 2002.”

He was only off by 19 years. Biden was preemptively accusing Bush of his own sins.

By the 2020 primaries, Biden had completely reinvented his entire history with Afghanistan.

“I’m the guy from the beginning who argued that it was a big, big mistake to surge forces to Afghanistan. Period. We should not have done it. And I argued against it constantly,” he falsely claimed.

Biden had gone from attacking Obama for ripping off his idea of surging forces to Afghanistan to being the guy who “from the beginning” had opposed the idea.

The idea that Biden opposed “from the beginning” was the one he originally claimed credit for.

That was quite a turnaround for the fraudster who had spent his previous presidential campaign declaring, “If we’re surging troops anywhere, it should be in Afghanistan.”

Biden, one of the co-sponsors of the Afghanistan Freedom Support Act, which began the nation-building push in that country, also claimed that he was against nation-building.

“Our mission in Afghanistan was never supposed to be nation-building,” Biden claimed in his recent failed speech after Kabul turned into Saigon.

Afghanistan should not have been about nation-building, but Biden was the loudest voice in support of turning the mission into nation-building. At one hearing he even complained that, “The original Marshall Plan cost $90 billion in today’s dollars. Our total pledge for Afghan reconstruction is less than 1 percent of that, and we’ve only delivered a fraction of this pledge.”

He attacked Bush, whining that his “follow-through commitment to Afghanistan, Afghanistan’s security and reconstruction has fallen very short.”

Back in the Senate Foreign Relations Committee, Biden had insisted that, “We have to get moving on reconstruction. We need more funds, and we need to use them better. The Afghans are patient, but they’re not seeing reconstruction worthy of a superpower.”

After Biden failed miserably in the primaries, Obama picked his most inept rival to pad out his ticket with an old confused white man. And Biden tried to out-hawk John McCain on Afghanistan. When that failed miserably, he turned to making up stories of his own heroism in Afghanistan. The stories were as true as anything else that came out of his mouth.

Despite having this intimate knowledge of where bin Laden and Al Qaeda were, Biden never went back to Afghanistan to hunt them down. That’s probably because Osama bin Laden was safe in a Pakistani military town. Biden’s helicopter, which also carried his Senate colleagues, future Secretary of State John Kerry and future Secretary of Defense Chuck Hagel, landed because of a snowstorm. “Other than getting a little cold, it was fine,” Kerry later said. “We were going to send Biden out to fight the Taliban with snowballs.”

The joke, as usual, was on Joe Biden.

Biden and the other Senate members were not in Taliban territory. Heavily guarded and in airspace protected by a F-16 fighter, they waited while a convoy took them to Bagram Air Base. That’s the same base that Biden would irresponsibly abandon, cutting off Americans trapped in Afghanistan from being able to get out without the permission of the Taliban.

Biden could have given credit to the men of the Arizona National Guard’s 1st Battalion who traveled through the “bitter winds, freezing rain and snow for more than 15 hours” to transport him out. Instead he pretended that he was some sort of hero for sitting in a warm chopper.

And now, Biden could have considered the thousands of Americans trapped in Afghanistan, when he gave the fatal order to pull out military forces without evacuating them. When he was on that mountain, American soldiers traveled through difficult weather to get him out. But when Americans, some of them veterans, are trapped in Afghanistan, he turned his back on them.

Obama adopted Biden’s proposal for an Afghan troop surge with disastrous results. American forces in Afghanistan were quadrupled to 100,000 while preventing them from fighting back so as not to alienate Muslims. 1,200 American soldiers died during the disastrous Afghanistan surge. And Biden, who had pushed the whole thing, ran the other way.

After taking credit for selling Obama on an Afghan surge, Biden rebranded as a skeptic of sending more troops to Afghanistan. By the 2012 election, Biden was running against his own Afghanistan position, and castigating Rep. Paul Ryan for wanting a conditions-based withdrawal. Meanwhile, Biden kept bragging about his expertise on Afghanistan.

“I’ve been up in the Kunar Valley. I’ve been throughout that whole country, mostly in a helicopter, and sometimes in a vehicle,” he claimed.

“What we also want it do is make sure that we’re not projecting weakness abroad, and that’s what’s happening here,” Ryan warned. Biden dismissed any such notion.

Obama and Biden promised a withdrawal from Afghanistan in 2014. It did not happen.

That’s been true of the vast majority of Biden’s promises.

When it comes to Afghanistan, Biden was usually for most things before then turning around and being against them. Biden had sold the D.C. political class on the idea that he was some sort of foreign policy expert based on Afghanistan when he actually had no idea what he was doing. He had jumped on the Afghanistan bandwagon after September 11 while scrambling for an approach that would build up his presidential credentials.

His initial response was, “This would be a good time to send, no strings attached, a check for $200 million to Iran.” But after that disastrous idea, Biden zeroed in on Afghanistan.

He constantly championed more troops and funding for Afghanistan.

“If we fail in Afghanistan, we are going to be talking about, in my view, a country seven times as big, with nuclear weapons sitting on one border, and a country that is, in its present security leadership, hostile to the United States on another border, with more than seven times, probably–I guess it’s probably 14 to 15 times the population, seeking nuclear weapons,” Biden argued at one Senate hearing in favor of expanding military forces in Afghanistan.

“We’re in for, as they say on the east side of Wilmington, Delaware, a world of hurt that has nothing to do with terrorism, that goes far beyond terror, far beyond terror. So I hope you’re here to tell us the good news about your overwhelming enthusiasm supporting expanding ISAF.”

Even completely dishonest politicians have the right to change their minds. Or at least pretend to have changed them. But Biden adopted the opposite position of the one he ran on while claiming that he had always “from the beginning” opposed the things he supported.

This behavior was not the mark of a responsible leader, but a clueless con artist.

That’s exactly what Biden always was. And it’s what his disaster in Afghanistan has plainly revealed him to be even to his passionate supporters in media.

Biden claimed to know all about Afghanistan. In reality he knew nothing. He leaped from one radical position, surging troops to Afghanistan, to the opposite extreme, withdrawing the troops before evacuating the civilians. The result was a horrifying national security disaster.

And the same media which has temporarily turned on Biden let it happen.

Biden’s dishonesty and ignorance were well known to the press corps. They chose to cover it up and lie about it because they wanted him to win. Now some of them are feigning outrage that the lying hack they championed could have unleashed such an inexplicable disaster.

Biden had contradicted himself again and again on Afghanistan because he didn’t believe anything coming out of his own mouth. That’s how the politician who once predicted, “If Afghanistan falls, I’m not sure how far behind NATO will be” was the one who fell.

The problem wasn’t that Biden had the wrong views, it’s that he was the typical case of a D.C. echo chamber politician who repeated whatever slogan he thought would get him ahead.

He had no plan for carrying any of his proposals out. All he could do was indict himself.

“Ousting the Taliban is only the first step in a long process. Everyone knows we can remove an evil regime. The question is, are we willing to expend the security, financial, diplomatic, and political resources to make the successor regime a success?” Biden once asked at a hearing. “The U.S. has power–but do we have staying power?”

Biden has since answered his own question.