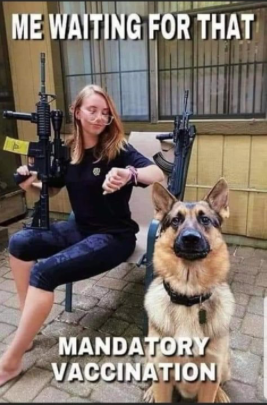 Our Founding Fathers created the Second Amendment because they thought it was our last stand for the people to be able to hold their will. It was designed and created as a safety measure for the people of America to never lose control of their future to the government. They created it so all of our rights as Americans could, and would always be enforceable.

The Biden administration has made a statement in regards to our #2nd Amendment: “No amendment to the Constitution is absolute. You can’t yell ‘fire’ in a crowded movie theater and call it freedom of speech. From the beginning, you couldn’t own any weapon you wanted to own. Nothing — nothing I’m about to recommend in any way impinges on the Second Amendment. They’re phony arguments.”

Our rights and our freedoms as Americans should never be up for debate. It is our responsibility as Americans to ensure that we do not give up those rights. Because if history teaches us anything it is this if we ever give up our rights and our freedoms, we will never get them back. No matter what we do, no matter how many laws we pass, we will never fully stop evil people from doing evil things. We don’t live in a utopian society.

As Americans, the right to dissent is marked intricately in the Second Amendment. It provides the citizens with a sense of liberty to voice their distrust in tyranny as we are facing today. It gives Americans hope in keeping autocratic decisions at bay. These facts do not take away the key tenet of responsibility that this right demands from its beneficiaries either.

To mix this up with the violence being recorded in the US would be a mistake. It is important to note that a ban on arms will not spell the end of violence – other methods are key in dismantling the system of destruction that people often resort to in cases where there have been outbreaks of violence. Instances of mass shootings have been prevented because citizens that exercised their 2nd Amendment rights had the tools to effectively protect and defend their families, friends, and their community. The root cause of such havoc must be countered and brought down. But that does not translate to methods antagonistic to the Second Amendment.

The Founding Fathers devised this freedom to safeguard our right to choose and protest when things turn murkier than they ever should. It was never meant to wreak mayhem, but rather a tool to protect one’s self. This is why the focus should be on reading the Second Amendment for what it is rather than distort it to fit a narrative that politicians use to disarm and allow the government to play a part in the disarmament of the people.

“What country can preserve its liberties if their rulers are not warned from time to time that their people preserve the spirit of resistance. Let them take arms.” – Thomas Jefferson, letter to James Madison, December 20, 1787

The primary target for reversing violent tendencies in a society should rest on defining the moral and ethical standards in a society. With people inclining further towards what is morally right and identifying the wrongs, it would be possible to put a curb on the destructive urge. This conditioning should begin with early education and a look back on our American History. Concepts that rely on moral and ethical values should be inculcated in growing children, not for the sake of it but for it to be held onto for the rest of their lives.

However, this must not be confused for the arbitrary outlining of what is ‘right’ and what is ‘wrong’. Relative validity matters here as well. Teaching children what is morally acceptable while making sure this is not an arbitrary affirmation of closed thinking is necessary to wage a war against the outbreak of violence. These are solutions that run deep. These also require a load of effort to be propelled into fruition. Perhaps this is why the immediate demand that people often fall back on is the end of the Second Amendment. But, that is never the solution. It rather takes away the core of central ideas of liberty and freedom. If you turn back on one right, the others too will follow suit.

The conversation surrounding increasing violence in the US should not spiral down into a conversation on ending the liberties under the Second Amendment. Weakening fundamental rights guaranteed to us by the constitution is a debilitating course of action for all of us irrespective of which side of the coin we identify ourselves with. This conversation should take into account those aspects that we, as a society, need to take in and alter in our mindset. By eclipsing such necessities in discourse, there is little that can be done.

The Biden administration must also look into how living conditions can be bettered with the overall development of human capital. But, for most in power (politicians), the convenient motto is to ‘get rid of the Second Amendment’. Politics that strays from the actual cause at hand and ground realities can never sustain itself behind a cloak that conceals your right to carry.

Our founding fathers learned from their history and set up these safeguards for #WeThePeople our own protection.

The American Founders recognized that the moment government is authorized to start leveling the material possessions of the rich in order to have an ‘equal distribution of goods,’ the government thereafter has the power to deprive any of the people of their ‘equal’ rights to enjoy their lives, liberties, and property.

They wanted to ensure the citizens–not the fascist-Socialist tyrannical government–had the means to defend themselves from oppressive tyrants. And that means whether foreign or domestic.