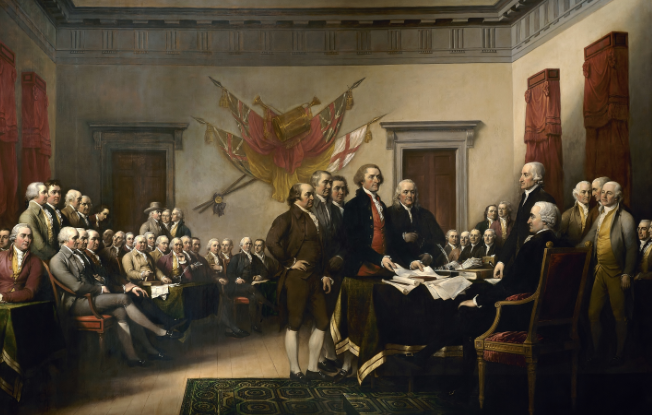 (From Editor: Sonya Sasser’s article was originally published in 2018 but it still holds true today.)

Since we are celebrating Independence Day today, every Patriot has got to love the fact that our Founding Fathers had the audacity to rebel against a tyrant like King George III.

Let’s face it: most governments—at some point in time— tend to lean toward being tyrannical and predatory. Even now in the United States where our elected officials pride themselves on being benevolent…Americans are being taxed, legislated, and regulated into servitude.

We now have a 3,000-page healthcare law that mandates and controls every aspect of our lives. We have NSA spying on our phone calls and TSA groping us at the airport. We have an administration hell-bent on trying to disarm us (all while arming our enemies, freeing dangerous terrorists, and allowing violent criminals ‘on the loose’). We have the IRS bullying and intimidating those who dare to dissent, and businesses being forced to violate their conscience.

Not to mention the fact that we have an administration that uses every ‘crisis’ as its central operating principle, turning everything into an ‘emergency’ as an excuse to fix it right now by executive order (i.e. immigration)—all for the purpose of vastly increasing government power and control over our wealth, behavior, and every other part of our lives.

Today, we have too many politicians and bureaucrats who are more inclined to preserve their job, power, wealth and comfort– than to risk everything by championing America’s freedom principles. Needless to say, we can see how the STATE is growing ever more tyrannical as a result.

The Bible (Romans 13) teaches us that God established government to restrain evil and to reward good behavior. Therefore,as citizens, we know that we should, in general, be subject to our government and obey its laws.

Many even raise the question of whether it was right for early Americans to declare their independence from Great Britain at all. Some argue that the United States was actually born out of violation of the New Testament principles.

However, as we explore the Bible, we see several examples where people disobeyed the civil government in an act of obedience to God (including: Daniel, Esther, Moses, and Apostles Peter and John). In fact, as we study the historical situation and Biblical principles, we see that the American Revolution can be morally justified.

Our Founding Fathers were well aware of multiple Biblical examples of civil disobedience and the overthrowing of tyrants. In fact, Benjamin Franklin’s remarkable proposal for a design of the Great Seal of the United States included the infamous motto: “Rebellion to Tyrants is Obedience to God.”

As author of ‘Politics According to the Bible,’ Wayne Grudem, says, “The reason that a number of Americans thought it was justified to rebel against the British monarchy is that it is morally right for a lower government official to protect citizens in his care from a higher official who is committing crimes against its citizens.”

Greg Forster, a scholar with expertise in the history of government theory, also describes: “A tyrannical ‘government’ is not really a government at all but a criminal gang masquerading as a government, and is therefore not entitled to the obedience that governments (properly so called) can claim.”

The Declaration of Independence contains a long statement of grievances against England that made it “necessary for one people to dissolve the political bands which connect them with another.”

The first two sentences say that God’s laws authorize the independence from Great Britain in 1776, and that God is the One who gives human beings the rights that governments seek to protect.

“When in the Course of human events, it becomes necessary for one people to dissolve the political bands which have connected them with one another, and to assume among the Powers of the earth, the separate and equal station to which the Laws of Nature and of Nature’s God entitle them, a decent respect to the opinions of mankind requires that they should declare the causes which impel them to separation.

We hold these truths to be self-evident, that all men are created equal, that they are endowed by their Creator with certain unalienable Rights, that among these are Life, Liberty, and the pursuit of Happiness. That to secure these rights, Governments are instituted among Men.”

The fifty-six signers of the Declaration of Independence declared that both the laws of nature and God himself gave our country the right to become and independent nation.

Lucky for us, the Founding Fathers also established our brilliant U.S. Constitution, which places chains on the kind of (tyrannical) government they had fought so hard against.

However, as genius political writer, Thomas Sowell, says, “The Constitution cannot protect you if you don’t protect the Constitution with your votes against anyone who violates it. Those government officials who want more power are not going to stop unless they get stopped.”

As our Founders rebelled against the tyrant of their time, we must also take necessary measures to do the same thing today– by staying informed, educating our fellow Americans, and by heading to the ballot box.

Indeed, we are in a monumental war for the “hearts and minds” of Americans, yet we don’t realize just how fortunate we still are. There are very few countries where debate and persuasion still have any influence on whether the people live under freedom or tyranny.

Our war is really just a huge conflict between deception and truth. Although, it seems that the deceivers may now have the upper hand. The elitists–those who believe they are ordained to rule over us, spend our money, and tell us how to live—actually think way in advance to develop their sophisticated strategies and crafty tactics (all fueled by their hunger for power) against us.

So, the best way to celebrate our Independence Day this year– is to rebel against these tyrants— by becoming ever more sophisticated…In other words, as Sun Tzu once wisely advised: “Learn to understand our enemy as deeply as we understand ourselves.”

Greenfield: Obama and the Broken Nation He Made Come of Age