Ijeoma Oluo spends a lot of time complaining about her single white mother who took care of her when her black father returned to Nigeria and never came back. 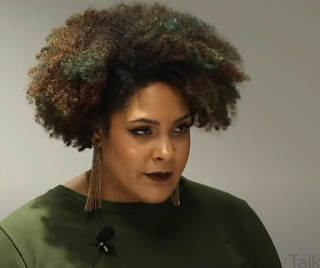 Like Obama and Kamala, Ijeoma built a marketable identity by identifying with a father who abandoned her. But the author of such racist texts as So You Want to Talk About Race and Mediocre: The Dangerous Legacy of White Male America takes it even further by identifying as Nigerian-American. The Nigerian part is very hypothetical as she was born and raised in America, and her Nigerian father left when she was a year old and broke his promise to return.

White people are absolutely terrible, Ijeoma, who is half-white, insists.

“I have never been able to escape the fact that I am a black woman in a white supremacist country,” Oluo declaimed at the beginning of So You Want to Talk About Race. The ugly racialist book never broke through the way that Robin DiAngelo or Ibram X. Kendi did, but it was a modest success and is regularly featured at corporate critical race indoctrination sessions.

Like other pop critical race theory texts, Oluo began the book by berating the leftist white women who were its target audience. It’s a topic she had practiced with her mother.

The woman who raised her and her brother, when they were abandoned by their black father, is a favorite topic for both siblings. But where Ahamefule Oluo, a jazz player and comedian, has done shows honoring his mother while emphasizing the subjective nature of race as he found that people in Nigeria saw him as white, Ijeoma Oluo has taken the opposite approach.

Ijeoma’s mother is a popular topic and punching bag. In essays and books, she decries her mother’s ‘whiteness’. “Our mom never thought that our blackness would hold us back in life—she thought we could rule the world. But that optimism and starry-eyed love was, in fact, born from her whiteness,” she complains in So You Want to Talk About Race.

When her mother asks, “How come you never identify as white, too? I mean, you’re half white”, she retorts that “I did not feel that whiteness was something that any person with brown skin and kinky hair could inherit”. Lots of white people have kinky hair. Certainly plenty of half-white people, like Ijeoma, do. And Ijeoma is obsessed with white supremacy’s threat to her hair.

Touching her hair, she rants, “is a continuation of the lack of respect for the basic humanity and bodily autonomy of black Americans that is endemic throughout White Supremacy.”

But for all the attention that Ijeoma lavishes on complaining about her mother’s insufficiently woke views on race, she never mentions her father in So You Want to Talk About Race. At one point she rants, “If our mothers were raped by white men and we were born with lighter skin, we could almost be seen as attractive.” But her mother was white and married an African student.

Ijeoma’s father was 53, but apparently told her mother he was 30 years old. After abandoning the mother of his children with a toddler and a one-month old baby, the African chief and doctoral student went back to his own country and promptly impregnated a woman there.

Her brother describes him as a “selfish and contemptible man”. Ijeoma instead wrote her second book, Mediocre: The Dangerous Legacy of White Male America. Her first book is full of shots at her present mother while her second book attacks an imaginary white father.

Mediocre was released by a Hachette imprint, alongside such critical race theory rants as Vicky Osterweil’s In Defense of Looting(The French publishing giant also suppressed Julie Burchill’s Welcome to the Woke Trials and fired Kate Hartson who had published pro-Trump books.)

An imprint named after a 19th century upstart French leftist publisher, Louis Hachette, a white man, released a mediocre book claiming that there was a crisis of white male mediocrity.

The incredible mediocrity of Moses, Hippocrates, Leonardo da Vinci, Christopher Columbus, Thomas Jefferson, Thomas Edison, and Albert Einstein might give some people pause, but Ijeoma explains that, “when I talk about mediocrity, I talk about success that is measured only by how much better white men are faring than people who aren’t white men”.

Sadly for Ijeoma, Mediocre was mediocre and failed to match the success of So You Want to Talk About Race. Ijeoma had gambled that there was an audience of white leftist women who wanted to hear that white men were awful without enduring attacks on themselves.

Ijeoma had underestimated the masochistic tendencies of the average white leftist woman.

Mediocre’s author imagines that she’s an “exceptional talent”, writing that, “most women and people of color have to claw their way to any chance at success or power, have to work twice as hard as white men and prove themselves to be exceptional talents before we begin to entertain discussions of truly equal representation in our workplaces or government.”

What exceptional talents has Ijeoma shown beyond bashing white people on the internet?

Mediocre is a random mess of intersectional clichés and historical sketches from periods that she clearly doesn’t understand as tries to roll them into her argument. “Stalin ended up being another white man who would distort entire movements to serve his purposes,” she insists.

That’s almost coherent compared to chapters where Ijeoma leaps from attacks on cowboys to complaining about Bernie Sanders supporters on Facebook. None of this has much to do with the book’s supposed theme of white male mediocrity. The only common thread is that white men are terrible because they’re white and they’re men.

White male conservatives are evil, but so are white male leftists who only join causes to maintain their power. White men are locked “into cycles of fear and violence” and the “white male glorification of violence has saturated our action films”. It’s a curious claim for a woman whose African father wrote his thesis on the Biafra-Nigerian Civil War and whose country, which she identifies with, has been in the middle of one kind of civil war or another for generations.

Women have to “divorce ourselves from the lure of proximity to white male power” even “when those white men are our friends, our husbands, our fathers, or our sons,” Ijeoma Oluo argues.

And yet Ijeoma followed her father, the “Honorable Chief Dr. Sam Oluo”, into political science. While her brother courted her father’s disapproval by playing music, she tried to imitate her absent father. And has spent her life making excuses for him and his culture.

When as a teenager she contacted Nigerians on the internet and they began to scam her, she processed it as the “legacy of colonialism” so that “every white person scammed out of their life savings felt, in a way, like a bit of retribution for the ravages of colonization and slavery.”

Except that the Nigerian scam artists were just as happy to scam her as they were anyone else.

“My Nigerian father was Catholic for the same reason why he spoke with a British accent,” Ijeoma snapped on Twitter. “Because his oppressors forced him to.”

Why did he abandon her? Probably because of those white oppressors. Like her mother.

There’s a story there about racial identity and hatred, gratitude and ingratitude, and the primal way that children can identify with a father who isn’t there while hating the mother who is.

But it’s not a story that Hachette would publish or Ijeoma Olou would be likely to write.

Last year, Ijeoma posted a tribute to the white grandfather who had not abandoned her when her black father had. “My father returned to Nigeria when I was two and was more of a story than an actual person in my life. But my grandfather, my Bob Bob, loved me so completely that I never felt lacking.”

The photo that came with it showed an older white man holding a young black girl in his arms.

Later that year, she published Mediocre: The Dangerous Legacy of White Male America.