California legalized pot 5 years ago, but you couldn’t tell that from the scale of the drug war.

Every few months brings another massive bust. A 40-acre illegal pot farm in an obscure part of Death Valley, the “most elaborate illegal marijuana” setup in Mendota with 50,000 pot plants that was so big that police could smell it from 1,100 feet in the air, “vast groves” worth $169 million in the eastern Sierras, and $285 million in the old Shasta region of the gold rush.

In 2019, California seized almost 1 million pot plants. One busted operation not far from San Francisco was processing 500 pounds of marijuana a day. 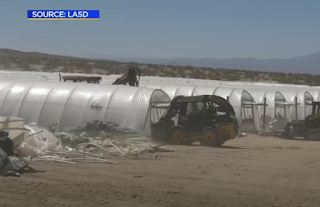 Governor Newsom had kicked things off with an address announcing that he was pulling the California National Guard from fighting what he described as President Trump’s “manufactured crisis” on the border to “refocus on the real threats facing our state”, like “illegal cannabis farms”.

Next year, 7 Laotians were brutally murdered at an illegal marijuana operation in Riverside by Mexican cartel members over Labor Day. With helicopters piloted by the Air National Guard and black SUVs full of DEA agents showing up in small towns, it’s like the drug war never ended.

Somehow the drug war in California is worse than ever.

Pro-pot advocates promised that legalizing drugs would bring in the money. And it did. Billions of dollars have been spent on “legal drugs”, but far more is being spent on illegal drugs.

The old drug war was fought by Republicans who believed that drugs were bad, but the new drug war is being fought by Democrats who love pot, but love drug money even more.

An ounce of pot is estimated to cost as much as $100 more bought legally than on the street. The profit margins are great and decriminalization expanded the illegal market even more than the legal one. Buyers no longer fear being busted, sellers have little to worry about, and even the growers who take much of the risk don’t have to worry about the stigma. Illegal growing has become an environmental and financial violation. The only real thing to fear are the cartels.

Mexican cartels now control much of the wilderness that California’s militant environmentalists had insisted on protecting from development. But while developers might fear the Sierra Club and its government allies, the cartels and the immigrant growers under their control don’t. What they’re afraid of is having their throats cut in the middle of the night. And as massive marijuana growing operations take off in wilderness areas, it turns out that the environmentalists were saving all that land so that drug lords from south of the border could grow millions in pot.

While California’s legal agriculture industries are dying: its illegal pot industries are prospering. If you want to grow avocados, good luck getting the water. Instead, Californians are buying Mexican avocados, from which the cartels take their cut, while the water goes to illegal operations that aren’t worried about permits or environmentalist pressure groups in Sacramento.

The old drug warriors wore suits and ties. The new drug warriors are the “entrepreneurs” who spent fortunes lobbying politicians in the hopes of cornering the market only to be stuck with a small slice of it aimed at upscale buyers willing to pay premium prices at boutique pot shops.

The environmentalists who once got high to commune with nature are among the most vocal special interests urging an aggressive war against this new form of agriculture which can’t be regulated. Behind them are identity politics groups and unions which want their cut of the cash.

A glance at the members of the Cannabis Advisory Committee shows some of the special interests involved from the pot workers branch of the United Food and Commercial Workers International Union to the head of the California NAACP to environmentalists. Legal drugs means money for unions and community groups, which really means money for Democrats.

Mexican drug cartels don’t pay consulting fees or offer donations to environmentalists, they don’t provide a cut to the black caucus, or hire unionized workers. It’s not the beheadings or rapes that bother California Democrats who shrug at such things from their gated communities.

But the illegal drug business is cutting into the profits from their legal progressive drug cartel.

Karl Marx observed that history repeats itself as farce. California’s Marxists are doing everything possible to live up to their leader’s teachings. After spending two generations fighting against the old drug war in the name of civil rights, they’re fighting a new drug war for civil rights.

Civil rights being anything that increases the power and wealth of California Democrats.

That’s why California’s Democrat majority passed a $100 million bailout for the “legal” pot industry. The widely reported bailout is really for the Democrats because it pays cities to hire experts to work with the industry on environmental compliance. What’s really going on is that the Democrat machine is paying its own environmental consultant class nine figures to navigate the roadblocks that same consultant class created in order to profit from the pot business.

That’s part of why an ounce of pot is $100 cheaper from the street than from a store.

Social justice is just a bunch of Marxist rhetoric behind which the same political mafia is moving money into its own pockets while laundering them through whatever ‘ism’ it’s fighting this week.

Whether it’s the environment or systemic racism, it’s another way for Democrats to get paid.

The old drug war was justified as a battle against a serious social ill, while the new drug war is just corrupt rent-seeking. The new drug warriors ridiculed the idea that locking up people for the harm caused by drugs was morally justified, but insist that locking up people because they haven’t paid the Sacramento mafia its share of the vigorish is completely morally justified.

California Democrats legalized drugs, further wrecking working class families, trashing what’s left of local agriculture and water supplies while feeding organized crime, to score $1.8 billion in tax revenues. But the illegal market is estimated at $8.7 billion. The new drug war is about the Democrats getting their hands on those extra billions by going back to the old drug war.

Why did California Democrats legalize drugs? It wasn’t to end the war on drugs, nor to make marijuana accessible to users with medical problems, or any of the other lies and excuses.

It was to make billions of dollars.

California’s new drug war pits socialists against drug lords over control of the drug market. It’s a familiar dynamic in South America that, like so much else, has crossed over the border.

The Democrats cloak their new social justice drug war in racial justice, offering “reparations” from their drug money to black people, in environmentalism, decrying the impact of illegal grows, in unionization, and in the whole colorful spectrum of leftist virtue signaling. But virtue signaling is no match for the ruthless determination of the cartels and their state sponsors.

How Civil Rights Made America a Critical Race Theocracy