Ever since Amazon created its own delivery service, the blue vests of its drivers and the dark blue trucks with the monopolistic giant’s arrow have become as ubiquitous as UPS brown or FedEx purple and orange on every street and highway in America. And with good reason.

Amazon’s package volume is expected to surpass UPS and FedEx as a host of men and women in blue rush to deliver orders from Chinese third party sellers and drop shippers.

But on the first Friday of June, a delivery in California instead ended in a violent assault. 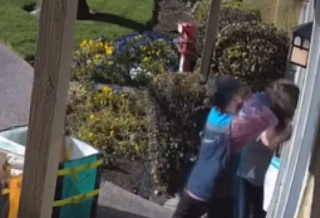 Usually Amazon rips off customers, companies, and entire countries, but it doesn’t beat them. This time there was an exception as Itzel Ramirez, an Amazon driver in her twenties, was caught on video violently assaulting a 67-year-old woman who had asked about her package.

While Ramirez claimed self-defense, the video shows her assaulting the elderly woman from behind, punching her in the back of the head, and seemingly using a key ring in the assault. The beating caused the victim to collide with the door and reportedly left her with a broken nose.

It was not the first assault by an Amazon driver on an elderly person caught on video. An Amazon driver had previously assaulted a 73-year-old man in Miami Beach. But this time the Amazon delivery person had used a politically correct slur thereby turning it into a hate crime.

Ramirez had accused her victim of “white privilege”.

Despite that slur, she has not been charged with a hate crime. In a state where critical race theory is being forced into schools and on employees of major corporations, it’s not likely that a violent racist echoing an official dogma that demonizes white people would be held accountable.

Amazon claimed that the violent assault on one of its customers “does not reflect the high standards we have for drivers” and assured everyone that “this individual is no longer delivering Amazon packages.” But it may be worth examining what Amazon’s standards really are.

Like every Silicon Valley company, Amazon has gone all in on critical race theory.

The Amazon assault happened the same year that Jeff Bezos, the company’s founder and CEO, announced that he was stepping down. Bezos was ruthless, cruel, and amoral, but beyond using the Washington Post to become a D.C. power broker had less interest in conventional corporate virtue signaling.

Andy Jassy, his right-hand man who will replace him as CEO after being in charge of Amazon’s cloud platform, is a more traditional Big Tech wokester.

Jassy falsely accused police departments of “murdering black people”, supported illegal aliens, and made the decision to shut down Parler. His wife is a Bernie Sanders donor.

The incoming Big Tech CEO has vowed to focus the company on “diversity and more inclusion.” If its employees weren’t feeling abused enough by having to pee into cups, Amazon mandated that all employees complete a 90-minute “Strengthening Our Culture of Inclusion” program.

Amazon had already banned non-inclusive language like “blacklists” (which didn’t stop it from blacklisting all sorts of people), but now it was going further with identity politics affinity groups and its Conversations on Race and Ethnicity (CORE) events featuring extremists and racists.

CORE events packed thousands of Amazon employees into massive meetings to be accused of racism by a series of racist and extreme leftist speakers.

The Big Tech monopoly’s first CORE event had already featured Robin DiAngelo, whose famous idea is that white people are all racist and evil, as well as Carmen Perez, the Farrakhan supporter who served as one of the leaders of the Women’s March before being forced out.

Amazon also invited Ijeoma Oluo, a self-described “internet yeller” who had written a book arguing that “white male mediocrity” is a theme throughout history. That’s exactly the message that a company of white male engineers needed to hear. Oluo had berated her own mother, who raised her after being abandoned by her Nigerian academic father, over her “white privilege”.

Also at Amazon’s first CORE was Michael Welp whose White Men As Full Diversity Partners stirred a backlash when its training at Lockheed described white men as racists and privileged.

Welp was also present at the second CORE event while stigmatizing white people.

Alicia Garza, a co-founder of the racist black nationalist hate group Black Lives Matter, appeared on a CORE panel together with DiAngelo and Perez.

Also there was Latasha Gillespie, the head of global diversity and inclusion at Amazon Studios, who has claimed that police murder black people while ranting about “white privilege”.

The second CORE event also included rabid hatred for America with Edgar Villanueva showing a slide that described America as being based on colonization and genocide.

What impact did all of these racist and hateful ideas have on Amazon employees?

Amazon, like many other major corporations, has submerged its employees in the dogma of critical race theory. And while this is meant to lead to the discrimination and mistreatment of white employees in the name of equity, could it also lead to violence against white people?

The Big Tech monopoly has relied on independent contractors to build its delivery network. However Amazon also exercises a great deal of control over these drivers. And as its statement after the “white privilege” assault in California shows, it ultimately controls their employment.

Amazon has embedded equity into its Delivery Service Partner push and encouraged existing employees to become DSPs. Did any of its existing racist CORE programming have an influence on the cultural ecosystem of the DSP that employed Itzel Ramirez?

That is unfortunately a question that no one in the media appears to be asking.

Amazon’s DSP program evades accountability for delivery drivers like Ramirez who wear its blue vests and drive its vans, but who are actually working for small contractors, many of them minorities, who are being deliberately kept small so they can never compete for a better deal.

The Big Tech giant will insist that it had no responsibility for the assault on one of its customers by a racist driver who had absorbed the critical race theory slur of “white privilege” that Amazon had endorsed by featuring racist figures and rhetoric at its CORE inclusion events.

Amazon’s white leadership encourages racism against white people while remaining insulated from minority workers who might want to lash out at the nearest white person they can find.

When BLM and Antifa created CHAZ in their Capitol Hill Occupied Protest zone, the epicenter was about a dozen blocks away from Andy Jassy’s 1906 mansion on the outskirts of Capitol Hill. But there’s a world of differences between the local small businesses that were terrorized by black nationalists and anarchists in CHAZ and the sedate tree-lined street of multi-million dollar Victorian homes where Jassy and his pro-Sanders designer wife comfortably reside.

The incoming Amazon CEO may rant about the police and his home may boast the ubiquitous “Black Lives Matter” “No Human is Illegal”, and “Science is Real” lawn sign prefered by wealthy woke suburbanites, but his estate is protected by a spiked gate and high walls disguised by massive hedges. Defunding the police is an experience to be lived out by other, poorer people.

Some people may be beaten by Amazon’s critical race theory drivers over their white privilege, but Amazon executives have spiked gates to make certain they’re not the ones being beaten.

A BLM Supporter Tried to Kill a Police Officer: That's the Terrorist Threat We're Not Discussing