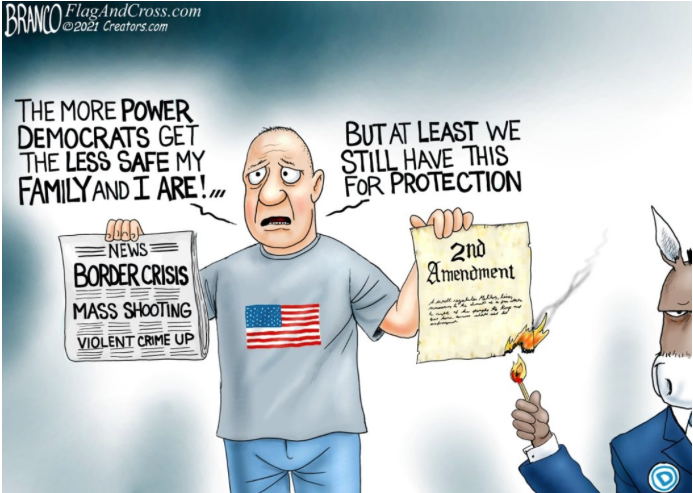 Public safety is perhaps the pre-eminent responsibility of government. If a government cannot protect its citizens against criminal members of its society, or even against the unlawful behavior of government itself, that nation no longer deserves to call itself a democracy.

Has the United States reached that point?

These provisions are the basic tenets of the need to maintain civil order and public safety in a democracy in harmony with itself. It means providing law and order, protection and safety for each lawful individual citizen.

It was written that way because it was known that there will be people, or even tyrants, who do not respect their fellow citizens and who are willing to take the law into their own hands, especially if you fail to provide the protective cover of a police force whether that protection comes in the form of a local sheriff or a municipal police force.

The outcome of defunding or dismantling law enforcement must, inevitably, lead to a sharp increase in lawlessness and violence.

Where this provision is singularly lacking in certain parts of America the social fabric has broken down. And when we examine the statistics where government has failed its people, they are almost exclusively in Democrat-governed states and cities.

If the result of that policy is the depression of the citizen, the removal of the freedoms and liberty to progress in life due to misrule, deliberate or of incompetence, the inevitable outcome will be lawlessness by a rebellious section of that society. This is what is happening in the inner cities of America, where African-Americans have been held back by damaging Democratic mismanagement.

We have heard talk by Democrat leaders of root causes. They talk about defunding the police, that guns are the root cause of the violence. Yet states with an active police force, states where guns are readily available, are not the states in which street violence is rampant.

These are the excuses of Democrat politicians who deflect blame from the depressing results of their management by discussing false root causes because they are unwilling to state the truth.

Chicago mayor, Lori Lightfoot, perhaps the most incompetent mayor in the country save for New York’s De Blasio, or Garcetti of Los Angeles -there is a real competition to get to the bottom of the greasy pole The inevitable outcome of mayoral incompetence – has blamed everything and everyone for the utter failure to counter the horrendous rise in murders in her city. Everyone, that is, except herself.

Following a brutal weekend of murders and shootings at the end of June 2021, she called for the reopening of the courts. These the are courts she closed in the first place on the pretext of Covid safety. The result of her ruling was that dangerous criminals were not brought to court to face charges and, as the prisons were deemed Covid traps, were not even kept locked up pending trial.

Lightfoot has led the charge in demonizing law enforcement, even accusing them of being racist.

The vacuous argument made in Chicago and other Democrat cities that the police should be replaced by social workers and psychologists ignores the obvious point that violent crimes happen in an instant. Who do you call as criminals are breaking down your door to rob or rape you, or as a violent crime or terror attack is occurring? In my country it is certainly not a social worker or a shrink.

In America, in Democrat states and cities, progressive prosecutors are actively protecting, actually encouraging, violent criminals with their stand down policies of catch and release. People guilty of brutal violence and destruction against both private and federal property are allowed out of jail often without bail to commit the same or worse crimes. These liberal justices act more like defenders of criminals than prosecutors. In such an environment, lawful citizens find no protection from the law.

Democrat mayors have allowed the mob to occupy sections of their cities in what the media call autonomous zones. We have seen mayors order their police to stand down and vacate areas leaving lawful citizens abandoned, held hostage at the mercy of lawless gangs.

These are examples of an outlaw public policy that fails the basic tenet of proving public safety for lawful citizens. It is an abject, or deliberate, breakdown of society.

Why should it be done deliberately?

When we hear TV pundits say, “where does it say that peaceful protests need to be peaceful” as they did throughout the riots and willful destruction of 2020, but then reversed themselves on January 6 when protesters entered Congress, the People’s Building, to protest and were incorrectly called “armed insurrectionists” when none of them carried lethal weapons.

You know there is a double game at play when the only fatality was an unarmed female shot in the neck by an official assailant whose identity is not only being protected by the authorities, but faces no charges for the murder.

Imagine if the authorities had done this with the officer responsible for the death of George Floyd. The blatant hypocrisy points to something very troubling.

Since when is it just in a democratic society to perform dawn raids on hundreds of political opponents and keep them locked in solitary confinement without trial for six months and counting?

The law books should be reopened and the criminal code reread. They tell that you cannot injure or kill someone without the case being brought to a public court for impartial justice.  They tell the authorities that they cannot snatch people from their homes and keep them in jail for prolonged periods of time with justifying their arrest.

Public accountability is an integral part of public safety and security.

This question should not be asked by the family of Ashli Babbitt or the hundreds incarcerated for six months with trial or charge. It should be asked by every American.

We will discuss this in Part Two of my series, to be called, “Never Let a Crisis Go to Waste.”