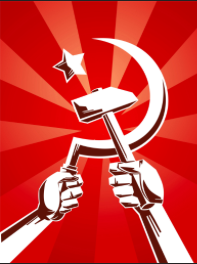 Communism is based on a lie, but it’s a lie that many people in the U.S. believe.

Why are they protesting Communism in Cuba? The State Department made it sound like they were protesting shortages of medical supplies, but no, they were protesting what they call the revolution.
The constitutional limits that we have on government create the illusion that there is such a thing as “the state” that loves you. It’s because we have had constitutional limits, the people who go into government are restrained in their love of power, and that makes us think, “Gee, government is a good thing, so we can trust government to redistribute wealth. We can trust government to take care of our health care. We can trust government to do all of these things,  giving government more and more power.”
And then you find out that the generous State was always an illusion.  In fact, all the State is, is people with power.  If you give them more power, they become more corrupt. Absolute power corrupts absolutely. And that’s what happened in Cuba.
People who like the left and want to maintain this theory of Communism that is supposed to make everything fair, they like to talk about the fact that Fidel Castro, at the end of the 50s, overthrew a brutal dictator, Bautista, and that is true: Bautista was an absolute tyrant. He had taken over from a tyrant before him.  They’ve just had one mass murderer after another.  Fidel Castro killed at least 11,000 people.  He’s been a thug from the beginning.
The way Communism usually rises up is that there is oppression or corruption, and the Communists who take office are motivated by a theory, and that theory makes them idealistic, and when that theory doesn’t work and they have all this power, rather than abandon this theory, which has been the motivating factor of their life, and say “Let’s go back to reality,” they just start to enjoy the power.
There’s nothing the Left loves more than a theory.  There’s this old joke that the Left says, “That will work in fact, but will it work in theory?”

That’s the thing.  Socialism may work “in theory,” and that’s why it’s so popular in places where you don’t have to prove yourself: the academy, the news media, Hollywood. They love that theory.  It makes them feel generous, but once you have the power, it just doesn’t work, because the benevolent State is a lie.