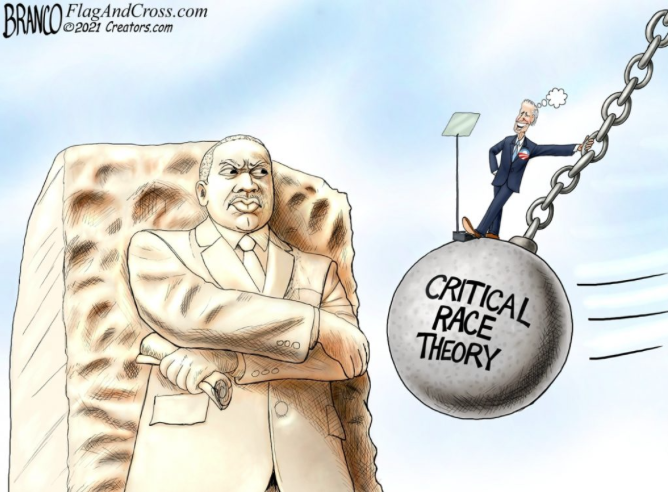 I find myself troubled by the concept and practice of Critical Race Theory. Critical race theory (CRT) has been described, by Brittanica, “as an intellectual movement and loosely organized framework of legal analysis based on the premise that race is not a natural, biologically grounded feature of physically distinct subgroups of human beings.”

Under the Brittanica definition of CRT, race is further described as a “socially constructed (culturally invented) category that is used to oppress and exploit people of colour.” Critical race theorists argue that the “law and legal institutions of the United States are inherently racist insofar as they function to create and maintain social, economic and inequalities between whites and non-whites, especially African Americans.”

Like many supposedly “new concepts” CRT is an amalgamation of older ideas. In the 1960’s, there was a concept enacted called Critical Legal Studies. This was a combination of race relations, an important subject of that decade, and the study of law. The founder of Critical Race Theory was Harvard Law Professor Derrick Bell (1930-2011). Bell was the first tenured black law professor at Harvard. He started actively using the term “Critical Race Theory,” actively in the 1970’s.

Many of the ideas and works of Professor Bell were directly influenced by work done from over 65 years earlier by W.E.B Dubois. Among his many abilities, Dubois was a socialist, a historian and a civil rights activist. Dubois is also one of the founders of the NAACP. In discussions on CRT, Bell’s ties to Dubois have been readily communicated.

Everything in our world is power, the distribution of which is mediated by race (e.g broad categorizations of Asian, Black, Caucasian, Hispanic, Pacific Islander etc.) Every human construction, from governments to home school co-ops, are embedded in racial structures that fundamentally build or dismantle racism and white supremacy. All people regardless of socioeconomic status, location or personality cannot help but perpetuate or undermine systems of racial oppression. This is critical race theory in a nutshell.

In the same article, Nielsen further states the following:

For adherents of this theory, Martin Luther King Jr’s dream is idealistic nonsense. The only path of progress is through the rubble of a completely dismantled America. Why? Critical Race Theory (CRT) asserts that the very structure of society is systematically oppressive to minority populations, and that racism is built into the very fabric of social life. So much so that even when overtly racist policies, practices or actions are ‘removed’ or ‘rectified; racism still exists-it is simply manifesting in new ways.

As a result, racism cannot ever be truly solved, according to CRT. This belief creates a truly dangerous situation. Children are being taught that they live in a society that is riddled with racism and hate. They are being told, due to factors outside their control-their melanin levels-they are oppressed, or they are the oppressors.

So our children, our most precious resource, are being indoctrinated in the public school system that we pay taxes pay for. Our children are being placed into two narrow categories: victims or victimizers. I do not believe in this indoctrination that currently exists within our public school system. The teaching of CRT in our school system concerns me greatly. They are teaching innocent children to hate others based on skin color. Instead of promoting unity and love they are promoting division and hate.

For many, the official public stance of CRT began in July 1989 with the First Annual Workshop on Critical Race Theory. This workshop was held at the St. Benedict’s Center in Madison, Wisconsin. To paraphrase the commentator, Billy Dyer, the sobering aspect of the mindset that created Critical Race Theory is that it exalts social grievances over objective truth. For the uninformed and the indoctrinated, it seems that a grievance is more true than an actual fact. Feelings over facts. CRT is an anthesis to the principle and practice of Critical Thinking.

CRT is currently being used as a form of “sensitivity training” to our Treasury Department, our Justice Department, our Military, among other government run institutions. They are all being taught forms of CRT. Well, they have their own crosses to bear and fully realized, thinking individuals need to embrace their own methods and forms of discernment. Our children, especially within Kindergarten and Elementary School ages, need a greater form of protection from socialist indoctrination as they are our most vulnerable citizens.

Critical thinking, by one definition, is the ability to analyze information objectively and make a reasoned judgement. The problem, again, is that the Public School system is teaching our children that they are victims or the aggressor towards the victims.

It is quite heartening to see parents throughout our great country showing up at PTA and School Board meetings protesting loudly against CRT indoctrination. They are protesting loudly and are not being shut down. Parents, more than ever before, need to be aware of the curriculum that is being taught to their children.

It is dangerous and delusional for a sitting President to say he will combat institutional racism and will create a police oversight structure. He is pandering to the most extreme strata of his party. It is dangerous when a former President, who claims to still embrace “hope and change,” continues to fan the fires of racism within our society. Especially when this former President is given credence in his perpetuation of our divisions.

It is also dangerous and delusional to tell a child that he or she is a victim or a victimizer because of the pigment of their skin. Racism is not a biological standard, like 10 fingers or 10 toes. Racism is taught by the ignorant to perpetuate ignorance. It is dangerous and delusional to teach a child that all police personnel are evil and only kill the innocent, especially minorities. That is so far from the truth that one cannot even measure the distance between myth and fact.

Along with CRT, we are being inflicted, as well as influenced, by a “progressive paranoia.” Various pundits are currently saying America is at its most Racist, Sexist and Homophobic than ever in our shared history. That is a waste of any principle or practice of cognitive or critical thinking. As in most forms of paranoia, it is ignorant of the actual facts.

There is a part of our society that gains wealth and power by the divisions that they actively create. We, the people, know exactly who these nefarious individuals are. We must expose these haters and fear mongers and resist them at every turn. Instead of critical race theory we should be teaching our children critical thinking skills.