That a battle over Atlanta would play nearly as pivotal a role in the country’s second civil war as it did in the first might have surprised few historians. What might have surprised them is that the battle would involve civic meetings rather than bullets. There are plenty of bullets in Buckhead, a part of Atlanta coping with runaway crime under the pro-crime rule of Mayor Keisha Bottoms, and those bullets have inspired local residents to secede and form their own police force. 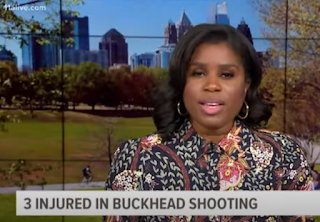 Buckhead is not the first part of Atlanta to try and secede. Sandy Springs had already successfully seceded from Atlanta and a number of cities in Fulton County, which includes Atlanta, have tried to break away to form Milton County. These efforts to escape the blight and corruption of Atlanta aren’t new, but Buckhead’s fight to escape Atlanta’s pro-crime government has captured the imagination of millions of Americans from one coast of the country to the other.

The cold civil war is being shaped not by national, but local secessions like the one in Buckhead as neighborhoods try to secede from cities, cities from counties, and counties from states in a powerful struggle by conservative and centrist communities to define their own way of life.

Most Americans might associate Roswell with UFOs, but a proposed bill by Senator Cliff Pirtle of Roswell would have allowed it and other counties located near Texas to secede with the possible intention of joining the Lone Star State. In Oregon, 7 counties voted to secede and join Idaho, Weld County is considering seceding from Colorado to join Wyoming, and western Minnesota has seen proposals for its counties to leave and unite with South Dakota.

Secession talk isn’t new. Northern Californians have kept the dream of a breakaway state named Jefferson alive for generations. The Democrat machine illegally suppressed a ballot measure that proposed to split California in three. The secession proposals that succeed are more modest and limited in scope. Breaking up states may be a moonshot, seceding from states might be an uphill battle, but the rate of local secessions is growing rapidly.

The most popular form of secession is also the smallest and involves school districts.

An average of 5 school districts secede every year. And while such secessions may get less publicity than plans to split up entire states, they’re commonplace and effective. They also represent the same trend of communities escaping the social and political wreckage of urban rule. Even as Democrats go to war against the suburbs, the suburbs are fighting back.

The political geography of the new civil war is a tug of war between Democrats seeking to concentrate authority in as few places as possible and an opposition seeking independence.

While Democrats and their media complain about the electoral college and the composition of the Senate, the nation and its states are largely ruled by a handful of metropolitan areas. The wealth that buys and sells elections nationwide mostly flows out of New York and California, and, more specifically, out of New York City and Silicon Valley. Geographic regions of less than 1,000 square miles in total rule a nation of 3.8 million square miles with an economic fist.

The meltdown of the urban areas drove suburbanization. And the spreading blight of urban areas into suburban communities due to the concentration of statewide political power in the cities has led to a secondary exodus from suburban bedroom communities to other states.

California not only went blue, but it ‘blued’ Colorado, Wyoming, and a range of other states. The final casualty of California’s blue wave may even end up being Texas. New York has had a similar effect, not only regionally, but even to the south, driving an exodus to Atlanta.

The tide of blue state invasions has the potential to transform the state of states and the nation.

Neighborhoods and school districts seceding from failed urban centers are trying to halt the problem at its source. Rural counties, especially in western states, are pushing back against larger demographic invasions that have transformed smaller states into miniature Californias.

Polls show that most people prefer to live in communities with people that share their values. As politics becomes more tribal, the number of neighborhoods with an even share of lawn signs for both parties is decreasing. In a political system that forces cake makers to bake cakes, indoctrinates elementary school students with radical views on race and sexuality, and cancels anyone who doesn’t go along, coexistence with a radical leftist system is no longer an option.

Secession is. The new civil war is being fought locally. It’s not a regional movement, but a communal one. What brings together rural areas and suburban communities is a desire to control their own way of life and escape the destructive centralization of urban regimes.

The new civil war isn’t being fought between the North and the South, but between the cities and the rest of the country. It’s an economic and social war whose objective is independence.

That’s why the smallest scale secessions have paradoxically been the most successful.

Whether it’s the Buckhead movement or the Texas Senate passing a bill allowing Lake Austin residents to secede from Austin only to see it die in the House, the secessions are gathering strength. But so is the Left’s battle to stop them through lies, racism smears, and judicial fiat.

Just because the public votes to create a separate school district or a city doesn’t mean that it won’t be blocked by Democrat activist judges who decide to override the will of the people.

The attempt by Gardendale to secede from the failed Jefferson County Public School system in Alabama was illegally blocked by federal judges. The Left is struggling to block the creation of the city of St. George in Louisiana with equally illegal lawsuits. But the pace of secession proposals is only growing as more communities struggle to escape abusive governments.

And as Democrats seek to illegally rig elections across the country with H.R.1, to transform the government city of Washington D.C. into a state, and to exercise total control over every local decision through its massive urban bureaucracy, the rate of secessions is only increasing.

Some only seek to restore control over local schools and police forces to communities, while others strive to reconfigure the borders of states to enable rural representation.

Though the term ‘secession’ and the idea of dividing a land summons to mind civil war, the more apt analogy may be the original secession of the United States from British rule.

“When in the Course of human events, it becomes necessary for one people to dissolve the political bands which have connected them with another,” Thomas Jefferson wrote in the Declaration of Independence.

America’s revolutionaries wanted self-government on their own terms. Their modern descendants are breaking away from New York and San Francisco, from Big Tech and Wall Street, the way that their ancestors sought to escape from London and its mercantile interests.

The fundamental issue at stake in the secessions is whether communities will be governed centrally or locally. Democrats and their media have worked to cloud the issue with false accusations of racism, but it’s not only white neighborhoods that are talking secession. A generation ago, black Boston residents proposed to create the breakaway city of Mandela. That movement has recently come in for a reexamination. It’s time to reexamine all of them.

The new generation of secessionism is driven by the unbearable pressure imposed on communities by the expansive ideological programs of radical leftist technocrats which leave little room for either individuality or human needs. Rather than learning from the profound failures of urban areas during the pandemic, all they learned is a need for greater control.

Secession is the natural human response to the control freak madness of cities which control entire states. Communities are confronting radical power grabs by taking back the power.

The cold civil war is being fought in civic meetings. The battles are local and the battle maps cover streets rather than continents, but it is a conflict driven by the impetus of revolutions and civil wars in which one people, as Jefferson wrote, seeks to part ways with another, not to rule over them, but to be free of their thievery, their abuses, and their tyrannical rule.

Jeff Crouere: Vaccine Passports and America's Version of the Gestapo

Howlin’ Wolf: The Soul of a Man