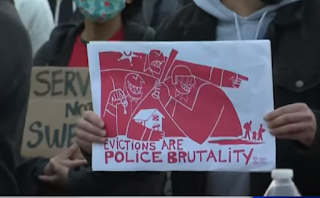 It was May Day, Brown was wearing a blazer and sunglasses. The former fashion model and son of a wealthy producer were there to ‘occupy’ a luxury suite for the homeless. And demand that the city take over hotel rooms and hand them out to the population of junkie vagrants.

Los Angeles Mayor Eric Garcetti held a press conference and assured Brown that he would get him a room. When the son of the Grey’s Anatomy producer was asked how to spell his name, he sneered, ““Parriott, like Marriott—which has 900 empty rooms.”

Jed, a Democratic Socialists of America activist, appears to live in a $1.3 million home in Silver Lake owned by a trust controlled by his parents: a prolific TV producer and a TV actress.

The trust also appears to own at least one other home, with 4 bedrooms, in the city.

Later that year, Davon Brown, still handsome, neatly groomed, and with the sleek physique of a gym rat, was at the center of the Echo Park homeless encampment. LA had just renovated the park in a hip neighborhood when it was taken over by the homeless and hopelessly befouled.

Brianna Moore, a talented 18-year-old concert violinist with offers from MIT, decided to get involved in the summer of protests. After a series of Black Lives Matter marches, she joined the homeless cause, and died in an Echo Park tent after taking cocaine laced with fentanyl.

The death of the sweet-faced white teenage honor student accomplished what months of complaints by local residents did not. But as LA authorities prepared to remove the encampment, Davon and Jed were once again at the center of things.

Davon’s publicist was hyping him in Hype Magazine as a champion for the homeless while promoting his new single. Jed showed up in a BMW X5 and sneered at local homeowners, “We need to be really telling these property owners, ‘Sorry, you’re going to have to tough this out.’”

Echo Park was finally evacuated this year, but Davon’s Instagram is filled with shirtless photos and glamor shots, many of which appear to come from Echo Park. And DSA-LA is touting Davon as “our unhoused comrade”. Meanwhile LA keeps trying to solve its “homeless crisis”.

The latest solution is a tent encampment filled with $2,600 tents.

And the Homeless-Industrial Complex quickly got to work finding homes for junkie vagrants in the way that only Los Angeles and its corrupt social justice welfare state can manage to do.

The first apartments cost an average of $479,000 a unit. Some went as high as $650,000 a unit. But that wasn’t good enough. Two years later, the cost of an average unit hit $531,000, with some apartments going up to $746,000. Building an apartment in Los Angeles for a crackhead was costing more than the price of a mansion in some parts of the country.

Despite all those high prices, only 228 apartments were actually built in four years.

City Controller Ron Galperin performed an audit on the $1.2 billion allocated for the homeless in 2016, and blamed the lack of progress on “red tape” and “a lot of consultants”.

Unable to build apartments for less than the cost of a mansion, Los Angeles launched a pilot program to build 8×8 aluminum sheds for the homeless for only $130,000 each. The average cost of a home in LA is $500 per square foot. The aluminum sheds with 64 square feet of space managed to completely blow that away. But the no-bid contract probably helped.

Since apartments were too expensive and even tiny homes cost too much, LA turned to tents.

The homeless had been setting up their own tent encampments for free. So the city launched a pilot program to have the government set up tents for the homeless for only $2,600 per tent.

Each tent in a parking lot near the 101 freeway in East Hollywood costs twice as much as the rent on a local apartment. It actually costs more than the average month’s rent in LA. You can find two-bedroom apartments in Beverly Hills that cost less than a government homeless tent.

Say what you will about self-constructed homeless shacks, they don’t cost $2,600 a month.

Not only is the government setting up homeless tent cities across Los Angeles, but taxpayers are now also on the hook for $2,600 for every tent.

Controller Galperin explained that, “doing nothing also costs a lot of money.”

The government tent city was outsourced to Urban Alchemy, a social welfare non-profit that has raised eyebrows by scoring million dollar contracts in San Francisco and Los Angeles to offer cleaning services, showers for the homeless, and tent cities. Urban Alchemy gets these contracts under the name of its financial sponsor: Hunters Point Family.

Urban Alchemy CEO Lena Miller explained that it all costs so much money because her organization employs “long-term offenders” and pays them $19 an hour.

While a lot of money gets spent, nothing really gets done.

LA keeps trying to scale down its solutions, but ends up spending more the smaller the solution.

The city tried to set up portable toilets which cost $339,000. Over a hundred thousand of that money goes to bathroom attendants. But over in Sacramento, the state’s capital, a homeless bathroom cost $1 million. When the Guggenheim Museum unveiled a solid gold toilet as one of its art exhibits, it was estimated to cost over $1 million. The homeless could have had a gold toilet for the cost of the free government toilets that they’re getting from the welfare state.

But they could have also had luxury condos with gyms and swimming pools for the cost of the apartments that are being built, but never actually get built, to house them.

California’s homeless are the richest homeless in the world. And while they may never see any of the money that gets spent on them by the Democrat Homeless-Industrial Complex, the cash bleeds into the pockets of the professional bleeding hearts who are getting rich off the poor.

That’s why no one except the homeless can afford to live in Los Angeles.