After a former Hollywood Foreign Press Association president shared my Front Page Magazine article about the BLM Hollywood connection, WarnerMedia executives sent a boycott letter to the foreign press organization behind the Golden Globes. Their outrage was understandable. 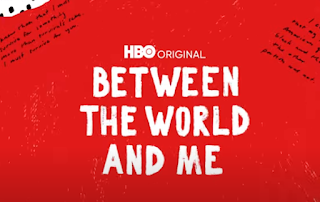 My article had cast a light on the ties between Warner and Black Lives Matter. No one had crawled harder and deeper into bed with the racist black nationalist hate group than the company that shared little more than a name with one of Hollywood’s signature studios whose name to most people still brings to mind everything from Bugs Bunny to Casablanca.

The Warner brothers were conservatives while a typical billboard for HBO Max, Warner’s streaming effort to compete with Netflix, urges audiences to subscribe and tune in to an adaptation of Ta-Nehisi Coates’s racist black nationalist tract “Between the World and Me”.

“Between the World and Me” featured Coates describing the firefighters and police who risked their lives to rescue people on September 11 as “not human to me” and “menaces”.

“Their new name has no real meaning divorced from the machinery of criminal power. the new people were something else before they were white–Catholic, Corsican, Welsh, Mennonite, Jewish,” Coates writes in “Between the World and Me”.

While HBO Max pulled and then restored “Gone With the Wind” over its “racial prejudices” complete with a disclaimer lecture, and Turner Classic Movies, owned by Warner Bros, launched a series condemning classic movies like “Breakfast at Tiffany’s” (Mickey Rooney’s buck teeth), “My Fair Lady” (misogyny), and “Psycho” (transphobia), it promotes the worst possible hatred of white people with million dollar contracts and massive billboards.

Warner Bros rewarded Coates’ racism further by having him write the script for a black Superman. Possible directors include Shaka King, the director of the Black Panthers propaganda flick, “Judas and the Black Messiah”, who had declared, “I haven’t needed white people to care about what I do in years now” and “a centrist is, in many ways, more dangerous than a white nationalist, because they’re really silently propping up the system”.

HBO Max’s’ Between the World and Me includes Alicia Garza, a co-founder of BLM. Garza is one of two BLM co-founders who is at home at Warner Bros. The Warner Brothers Television Group had signed a production deal with Patrisse Cullors: a self-described Marxist.

As ABC Entertainment boss, Channing Dungey had made the decision to fire Roseanne from her namesake show for comments critical of Obama crony Valerie Jarrett. Dungey jumped to Netflix, bringing along Scandal’s Shonda Rhimes who went on to create “Bridgerton” for Netflix, and worked with Barack Obama’s Higher Ground agitprop production company.

Dungey was one of the signers of the boycott letter.

“Ahmaud Arbery, Breonna Taylor, George Floyd, all those deaths coming in quick succession — I think it’s opened up an entirely different conversation that particularly in Hollywood, coming in the wake of #MeToo, I think everyone is realizing that the business has been built on some systemic wrongs that need to be righted,” Dungey told Variety.

The nature of the systemic wrongs in an industry that took Dungey from a production assistant to the destroyer of genuinely talented people like Roseanne may be harder to define. But she’s a symptom of a larger problem at Warner Bros which has gone all in on black nationalism.

Along with Dungey and Rimes, Warner Brothers lured away black nationalist director Ava DuVernay with a $100 million deal. DuVernay’s “13th” series for Netflix had falsely accused America of slavery due to the high number of black people convicted of crimes in prison.

But Warner Bros also had no problem scraping the very bottom of the black nationalist barrel.

After signing Cullors, it cut a deal with Kimberly Latrice Jones, a BLM activist who made a viral video in support of looting.

“Far as I’m concerned, they could burn this bitch to the ground, and it still wouldn’t be enough.”

The unhinged racist rant helped get her a book deal, a movie deal, and a deal with Warner which under AT&T has been happily burning the company and its brand down to the ground.

Warner also signed a multi-year deal with Phillip Atiba Goff whose thesis adviser was Cornel West and is the author of “Saying ‘No’ to Whiteness”, to produce social justice content. Dungey described Goff as “a leading voice of moral clarity on critical issues facing our society”.

In the rush to elevate anyone shouting about the evils of white people, HBO Max is littered with basement garbage that looks like the work of college students laboring on public access TV.

You can find “Random Acts of Flyness”, a typical episode of which is titled, “They Got Some S___ That’ll Blow Out Your Back”. The Terence Nance variety show features a “family mourning a high-profile case of police violence” and asks “does the Second Amendment apply to black people”. One mock commercial features Mad Men’s Jon Hamm touting “White Be Gone” which promises to help those who are suffering “from white thoughts”.

In a sign of just how far Warner had toppled its intellectual properties into the gutter of black nationalism, it tried to turn over the Looney Tunes franchise to Nance to direct “Space Jam” with Ryan Coogler, of the anti-police agitprop “Fruitvale Station”, acting as producer. Coogler, who went on to direct Marvel’s black nationalist Black Panther fantasy, also produced “Judas and the Black Messiah” for Warner celebrating Black Panthers leader Fred Hampton.

But you can also find HBO pushing “Beah: A Black Woman Speaks” about Communist activist Beah Richards who played a major role in the We Charge Genocide smear to divert attention from Soviet crimes by falsely accusing America of genocide.

And if you thought John Oliver or Stephen Colbert weren’t political enough, Wyatt Cenac’s “Problem Areas” is a string of diatribes about racism and social justice. Cenac is a Daily Show veteran who jettisons much of the format and instead lectures audiences about racism.

HBO Max is struggling to catch up to Netflix, Amazon Prime, and Disney+, but the actual numbers show that it’s far behind. While the service claims 44 million subscribers and touts ambitious plans to reach 150 million people by 2025, these numbers are suspect.

Earlier this year, activations stood at only 17 million. HBO Max no longer reports activations making its numbers meaningless. By the spring, AT&T had disposed of HBO Max and the rest of its Warner package by merging the whole mess with Discovery’s programming.

While AT&T put the best possible face on this move, the $4 billion dollar bet had not paid off. And Warner’s massive investment in black nationalist programming had thoroughly failed.

HBO Max’s biggest bump came from its decision to dump “Wonder Woman 1984” on the platform at a cost of hundreds of millions of dollars. The movie, starring Gal Gadot, a pro-Israel actress under fire by critical race theory activists, was the antithesis of the new intersectionality. The second biggest came from the Friends reunion: a show under fire for its lack of diversity.

Despite HBO Max’s massive investment in black nationalism, its successes were all too white.

While all of its big streaming platforms rivals, Netflix, Amazon Prime, Hulu, Disney+, and Paramount+ invested in black nationalist narratives to varying degrees, none did so as belatedly, futilely, and relentlessly as HBO Max which threw away its brand and its future.

WarnerMedia may have boycotted the Golden Globes, but subscribers boycotted its service.

Warner bought into Black Lives Matter and built its content brand around militant black nationalism and anti-white racism. While AT&T’s CNN was touting the looters, AT&T’s HBO Max was being looted. Like so many other companies, after the woke comes the broke.