A decade ago, Vice President Biden paid a visit to Jerusalem. 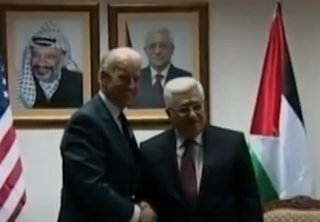 Like any trip by an emissary of the Obama administration, it wasn’t a goodwill tour, but a combination of a provocation and a shakedown. While Biden was in Israel, two construction projects received partial approval in a multi-stage process from the City of Jerusalem.

Biden responded by staying up in his hotel room and refusing to come down for an hour.

When he did come down, he hugged Netanyahu and assured him, “Just remember that I am your best f____ friend here.”

Biden’s definition of friendship is the backstabbing kind because after that he and the entire Obama administration began attacking Israel over a decision made by a local urban agency.

“It was not only an insult to Biden, but an insult to the United States,” Secretary of State Hillary Clinton ranted. Then she spent two hours yelling at Netanyahu over the phone.

“I was often the ‘designated yeller,’” Hillary would later brag about her relationship with Israel.

“There was an affront, it was an insult,” David Axelrod, Obama’s senior adviser falsely claimed.

The media launched a disinformation campaign falsely claiming that Prime Minister Netanyahu had deliberately caused a Jerusalem urban planning committee to reach a decision on housing in two areas that until then no one had even been paying much attention to.

One of those housing projects was going up in the Shimon HaTzadik (Simon the Righteous) neighborhood named after the last true high priest who had dissuaded Alexander the Great from putting up an idol in the Temple.

The Jewish neighborhood had been built in the 19th century. In 1936, Muslim rioters drove out the community while shouting, “Allahu Akbar” and “Ibtach Al Yahood” or “Kill the Jews”.

This was the first modern Muslim attempted genocide of the indigenous Jewish population of Israel. A British truck driver recollected a massacre in Tiberias in which “the bodies of children, apparently set alight with gasoline in a nursery, were still smoldering” and “the naked bodies of the women exposed the evidence that the knives had been used in the most ghastly fashion.”

In 1947, the Muslims came for the Jews of the neighborhood again and they fought back with the few weapons they had. Then British forces came along and disarmed the Jews to “keep the peace”. The Jewish population fled again. Jordan’s Arab Legion, under British officers, seized half of Jerusalem, and ethnically cleansed its Jewish population Some of the homes in Shimon HaTzadik (referred to by Muslims as Sheikh Jarrah after one of Saladin’s colonizing invaders) were used by the UNRWA to settle Muslims in violation of international law.

The other housing project in Jerusalem in Ramat Shlomo was set to be built on uninhabited land that not even the PLO was claiming as its own.

This was what Biden, Hillary, the Obama administration and the media were howling about.

Obama used fake outrage over Jews living in Jerusalem to engineer the beginning of the Democrat Party’s break with Israel. Biden played a key role in staging an international incident to manufacture a narrative in which Israel was somehow provoking a conflict with Obama.

11 years later, Biden is so short of ideas that he went right back to the same neighborhood.

The Muslim squatters planted by UNRWA in Jewish homes have refused to pay rent to their owners or leave. After two generations of court cases, Israel’s Supreme Court was moving to issue a final decision. The Islamic terrorists of the PLO and Hamas used this as a pretext for a murderous campaign against Israel. And everyone from Biden on down has warned Israel against actually following the law and allowing the Jewish owners to reclaim the property.

Biden funded Iran, backed the terrorists inside Israel, and then warned the Jewish State against “provoking” them by allowing Jews to take part in a parade or allowing courts to follow the law.

On May 10th, well before the fighting began, Biden’s people ordered Israel not to evict any of the Muslim squatters and to cancel the annual Jerusalem Day celebrations. Netanyahu tried to appease Biden by rerouting the parade and asked the Supreme Court to postpone a decision.

Despite these efforts at appeasement, the Islamic violence escalated anyway. But that hasn’t stopped the Biden administration and its media allies from blaming Israel anyway.

That’s how this game of diplomatic Catch 22 with Israel always works.

The Supreme Court, which is independent and doesn’t answer to either Biden or Netanyahu, refused to halt the eviction case. That hasn’t stopped the Biden administration from continuing to make illegal demands that another nation’s supreme court should refuse to follow the law.

But Biden is also moving to open a consulate for the ‘Palestinians’ in Jerusalem to counteract the embassy that President Trump moved to Jerusalem. The consulate would violate Israeli sovereignty and would be illegal under United States law. Neither bothers Biden.

There’s also no reason to set up a consulate to the terrorists in Jerusalem except to violate Israeli sovereignty over the city and stake a claim to the Jewish city for Hamas and the PLO.

The Palestinian Authority operates out of Ramallah. The Russians and Chinese have their diplomatic missions in Ramallah. That’s not out of sensitivity to Israel, just common sense.

Biden wants to set up a consulate to the PA miles away from the terror state regime that he wants to have close diplomatic relations with. State Department personnel told the media that during the war they thought they were “flying blind” without a consulate. But a consulate in Jerusalem puts them no closer to Abbas and the Palestinian Authority’s government than the embassy they already have in Jerusalem does. If Biden wants a consulate close to Abbas, he could erect one in Ramallah. Otherwise the consulate could operate out of the embassy.

Secretary of State Blinken claims that Biden wants a consulate in Jerusalem “to be able to more effectively engage not just the Palestinian Authority, but Palestinians from different walks of life, the NGO community, the business community, and others.”

Countries don’t have diplomatic relations with NGOs and businesses, but with countries. France doesn’t operate a consulate to Coca Cola or the Sierra Club.

But if Biden and Blinken want to “engage” the non-profit NGOs that are funded by the State Department, the European Union, George Soros, and other anti-Israel billionaires to wage a campaign against Israel, they can just open a consulate in D.C., Brussels, or the Open Society Foundations in Berlin. And the Muslim “business community” of the 600 Hamas millionaires in Gaza, (falsely depicted as an “open air prison” in the media’s disinformation campaign) would be best engaged by opening a consulate in Gaza City right next to the AP’s offices.

There’s no legal or rational reason for Biden to open a “Palestinian” consulate in Jerusalem.

It was more important to make a point by refusing to recognize Jerusalem as Israel’s capital.

The Soviet Union and European media made a point of referring to Tel Aviv as shorthand for Israel’s government the way that we would refer to London as shorthand for the British government which was like insisting that the White House is really in Boston.

It’s not just Iran that refers to Israel as “the regime in Tel Aviv”.

That’s the denialist mindset behind Biden’s push to open a terror consulate in Jerusalem. Biden’s people, especially his pro-terrorist point man Hady Amr are, as the State Department often accused Israel of doing, “creating facts on the ground” for the PLO and Hamas.

And no politician has been more hypocritical and dishonest about Jerusalem than Biden.

In 1990, Biden co-sponsored Senate Concurrent Resolution 106 which condemned “ambiguous statements by the Government of the United States concerning the right of Jews to live in all parts of Jerusalem”.

Two decades later, Biden became a key figure in attacking the right of Jews to “live in all parts of Jerusalem”.

In 1992, Biden co-sponsored Senate Consecutive Resolution 113 stating that “Jerusalem must remain an undivided city” and in 1995 co-sponsored the Jerusalem Embassy Act declaring that “Jerusalem should remain an undivided city” and “be recognized as the capital of the State of Israel”. All the way back in 1984, Biden was saying, “I happen to support this move”, but “I think it is the wrong fight to make it this time.” And it always went on being the wrong time.

When President Trump called Biden’s bluff by moving the embassy to Jerusalem, Biden conceded that “I wouldn’t reverse it. I wouldn’t have done it in the first place.”

Biden promised to open a consulate to the “Palestinians” in Jerusalem and he’s on it. The proposed consulate has no legitimate government function because it’s not in Ramallah.

The only purpose of the consulate is to undermine President Trump’s recognition of Jerusalem.

After years of enthusiastic speeches at AIPAC, Biden offered a sonorous video in 2020 warning of a “humanitarian crisis” in Gaza and telling Israel that it needed to stop Jewish “settlements”.

Biden threatened Israel that if it didn’t keep Jews from living on land claimed by the terrorists, it would “choke off any hope for peace” and undermine support from Democrats.

During his campaign, Biden promised, “I will reopen the U.S. consulate in East Jerusalem”.

He’s not reopening it to “engage Palestinians”, but to counter Israel’s claim to Jerusalem. After decades of pretending that he supported recognizing a united Jerusalem as the capital of the State of Israel, Biden is doing everything he can to undermine Israel’s presence in Jerusalem.