With inflation rising almost as fast as gas prices and the cost of a home, Joe Biden ain’t doing much for most Americans. But if you’re an Al Qaeda terrorist, he’s got your back.

Just ask three of Gitmo’s finest who are benefiting from Biden’s generosity. 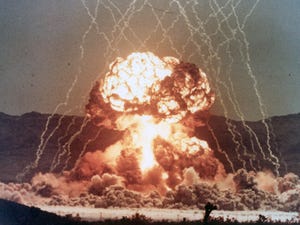 Saifullah Paracha was a Pakistani businessman and New York travel agent with some big plans. The Gitmo inmate now being set loose by Biden wanted to “do something big against the US.”

9/11 was in Al Qaeda’s rearview mirror and its mastermind, Khalid Sheikh Mohammed, was plotting a sequel. The Gitmo dossier for Paracha first details a plan to use his “textile business to smuggle explosives into the US” and these “ready-made explosives, specifically C4” would go into shipping containers full of “women and children’s clothing”.

Shipping Al Qaeda’s C4 to America would be more lucrative than dumping sweatshop labor sweatpants because “if al-Qaida used detainee’s textile company for shipping explosives to the US, he would likely be paid additional money beyond the standard shipping fees”. No word on whether there would have been a bonus for every American blown up.

And then things escalated from there with testimony that Paracha allegedly claimed that he, “believed he could obtain unspecified chemicals from Chinese sources”. The fellow he was talking to about the unspecified chemicals, Ammar al-Baluchi, one of the few Gitmo Jihadis whom neither Obama nor Biden had managed to release yet, had helped out the 9/11 hijackers with flight simulators, and manuals, and allegedly chatted with Mohammed Atta.

After 9/11, Al-Baluchi was looking at all sorts of plans for crashing planes into things, like the American consulate in Karachi or London’s Heathrow airport, but there were other options on the table. The nature of the chemicals out of China was never specified, but the KSM lieutenant believed they were” chemical or biological agents” that could be used “as a weapon”.

Paracha reportedly advised Al Qaeda that “one should look for a similar looking chemical and put it in between the good chemicals and it would be very easy to get [through] customs.” With his business experience, he could offer Al Qaeda tips on smuggling such as warning them about the “radiological sensors at ports or places of entry into the US” that would make it difficult to smuggle radioactive materials into the country”.

But Biden’s newest charity case wanted something bigger. The dossier describes the 9/11 mastermind’s associate and Paracha chatting about Al Qaeda getting some “radiological or nuclear items several times” because Paracha wanted “to help al-Qaida ‘do something big against the US.’”

So you can see why Joe Biden is letting him go.

The Pakistani graduate of the New York Institute of Technology “expressed strong anti-US sentiment” and allegedly “stated that nuclear weapons should be used against US troops, as thousands of the troops would be killed at once”.

The pro-terror lobby has spent all these years claiming that Paracha was an innocent victim of American imperialism who was never charged with anything and was smeared with confessions obtained by acts of horrifying torture like Barney songs played on a non-stop loop.

Curiously the dossier mentions that Paracha’s diary had “references to military chemical warfare agents, and their effects on humans” including Sarin nerve gas.

But what New York travel agent hasn’t filled his diary with entries about the effects of nerve gas on humans along with the contact information for an alleged Al Qaeda anthrax operative?

You’d have to be an Islamophobe to find anything suspicious about that.

Sadly, none of these plans worked out. Instead the agents of the Great Satan told Palacha that they wanted him to come to Thailand to discuss a deal with Kmart. When Palacha showed up to pitch Kmart reps on a blue light special that might or might not glow in the dark, they weren’t there to get a deal on some Pakistani underwear, but offering a place off Cuba with a view.

Even Obama didn’t set Paracha loose, but Biden is determined to out-Obama him.

The media understandably doesn’t want to trouble Americans with any uncomfortable mentions of nuclear weapons and Chinese chemicals when explaining Biden’s latest gift to Al Qaeda.

The New York Times only mentions that Paracha is “a former businessman and longtime legal resident of New York” and that he has “heart disease, diabetes and high blood pressure”.

Also some years ago a spiritual leader with a Buddhist symbol made famous by an Austrian house painter carved into his forehead died of colon cancer while one of California’s oldest inmates. It’s almost as awful as when that elderly former house painter commited suicide after a long struggle with syphillis along with his new bride in a bunker that Biden would have envied.

If Biden really wants to cure cancer, he can drop all of that moonshot nonsense, all he needs to do is give all of Al Qaeda cancer, and then release them. If it doesn’t cure them, it’ll kill them.

Releasing Paracha might also be a concern for the Brits as the dossier also states that he had discussed with Al-Baluchi “how to smuggle explosives and chemicals into England”.

When Paracha wasn’t exploring the exciting possibilities of nuclear weapons, he met Osama bin Laden on a trip to Afghanistan and “offered to let UBL and al-Qaida use his media broadcasting business to film and distribute propaganda and training films” that would include “depicting UBL quoting Koranic verses”. While a lot of Paracha’s other plots were theoretical, the dossier indicates that Al Qaeda used Paracha’s “video broadcasting facility” to make a movie featuring “a senior Saudi al-Qaida facilitator associated with a cell targeting Americans in Saudi Arabia.”

But no doubt after all that time having to listen to Barney sing, “I Love You, You Love Me” on repeat at Gitmo, with nothing to read except the Koran and Harry Potter novels, Paracha has come around and now loves America. And from now on will commit to only shipping women’s and children’s clothing to Kmart without C4, Chinese chemicals, or nukes.

The other beneficiaries of Biden’s generosity are Uthman Abdul Rahim Mohammed Uthman, an alleged bodyguard for Osama bin Laden, and Abdul Rabbani, allegedly a member of an Al Qaeda cell plotting car bomb attacks against Americans.

Biden intends to continue Obama’s work of freeing all the Islamic terrorists of Gitmo.

Paracha had apparently told American investigators that “he did not think meeting with al-Qaida was a crime, just business”.

Biden clearly doesn’t think aiding Islamic terrorists is a crime either. That’s why he’s doing it.

Emery McClendon: Honoring Those Who Sacrificed