Rochester has the second highest urban murder rate in New York with killings up 56% and shootings up 90%. Once the 32nd largest city in the country. Rochester is at number 111 and falling. Its population shrank 6.2% since 2000. The poverty rate is at 31% and the only thing going up is STDs with gonorrhea up 77% and chlamydia rates placing second in the state.

So the Democrats are using Rochester as a model for America. 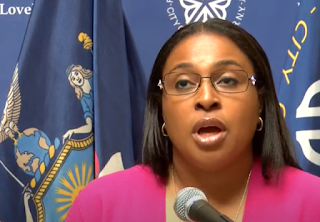 Hardly a week goes by without someone in the media, who has never been to Rochester and wouldn’t go there at gunpoint, describing it as the first city to conduct some socialist experiment.

Last month, the media was promoting Mayor Lovely Warren’s push to use drug revenue for racial reparations and basic income even though the last thing a city with open air heroin markets needs is the government handing out free money financed by drug sales.

If Rochester is the model for fixing anything then the answer is always, “Hell no!.

But Rochester is always doing something excitingly progressive like defunding the police or being designated by Governor Cuomoas a “model EV city” and setting up electric car charging stations across a city with few electric cars and a plague of deadly carjackings.

Before Rochester became Cuomo’s model city for charging the electric cars it doesn’t have, it was his pick as a “model city” to fight global warming by building 10 miles of bike routes.

Those routes give Rochester’s bike thieves different options for making their getaway after over 100 bikes were stolen from a neighborhood biking program giving away free bikes.

“I just want to ensure that the people that did this know I love them and that our program is open to them,” Mayor Lovely Warren assured the thieves. “We’re just extremely sorry that life’s circumstances led them to a place in which they had to make a decision like this to rob a free neighborhood program of bicycles.”

The free bikes program shut down this year.

Fresh off the efforts to make Rochester into a model city for electric cars and bikes, Mayor Lovely Warren embarked on a social justice spree of police defunding and reparations.

Morbidly obese white socialists showed up naked in white hoods and sat on the steps of City Hall with “Black Lives Matter” written on their on their bottoms to protest a black mayor.

Not even the most dedicated white supremacist could have come up with anything more racist.

After that the Black Lives Matter race riots and arson almost came as something of a relief.

It was a mystery no one could solve. Especially the police who weren’t allowed to solve crimes.

As murders rose 56% and shootings shot up 90%, Rochester decided to offer iPads in exchange for “working handguns and assault rifles”. No questions asked. A week after the “largest gun buyback in Rochester history”, four people were shot in just one day.

Five months after announcing that she wanted to reimagine the police, Mayor Lovely Warren was indicted on campaign fraud charges. Last month, her husband was busted in the takedown of a drug ring. The cops found a semi-automatic rifle in her home. Warren, who had allied with Bloomberg’s Everytown gun control group, claimed that she knew nothing about the weapon.

It couldn’t have been too shocking since her husband had already been convicted of armed robbery.

Mayor Lovely Warren blamed the whole thing on racism. “Things are not that different from the 1860s and 1950s,” sheinsinuated. It’s just like the 1860s in Rochester under its black female mayor, black female police chief, and 60% black city council with only two white members.

Warren then doubled down on racial reparations and police defunding.

It’s important to “invest in the people, in the neighborhoods that suffered from the criminalization of marijuana,” she had claimed earlier.

Rochester isn’t suffering from excessive criminalization, but decriminalization. And the last thing a city overrun with drugs needs is more drugs, or police defunding, EV chargers, demolishing highways, or any of the other “progressive” gimmicks that Democrats keep jumping on.

The media is right. Rochester is a model. And a cautionary tale.

The former booming industrial city is a model for what the Democrats want to do to America, gutting industrial bases, replacing work with welfare, and then using black people as lab rats for radical social experiments like drug legalization and police defunding with deadly results.

Being a “model city” now means having every toxic leftist policy idea tested on you.

Democrats have failed at the most basic elements of governance in Rochester. And yet they keep rolling out exciting new ideas to fight global warming or transform society when they can’t even handle their existing responsibilities.

Rochester is the 5th poorest city in the country. It’s also one of the dirtiest, it has the worst schools in the state and some of the lowest literacy rates. The graduation rate hovers between 40 and 50 percent. 75% of Rochester’s children are being raised by single parents.

If Mayor Lovely Warren really wants to “close the wealth gap between Black and Brown people and our White neighbors”, then she might want to start there, instead of writing checks for black people from drug money while turning Rochester streets into war zones with police defunding.

But this is the Democrat model that devastated cities and communities. The only thing that they have added to this mix since the seventies is electric car chargers and police defunding.

And then they blame the corrupt, violent, and impoverished hellholes their economic and social policies created on “systemic racism”. Like the naked socialists wearing white hoods to protest racism, they’re right about the racism, but the naked leftist emperors could use a mirror.

Whatever happens to Mayor Lovely Warren, her city will go on chasing every new progressive policy idea (and the cash and publicity that comes with it) even as life keeps getting worse.

And Democrats will try to turn every city, town, and village into another Rochester.