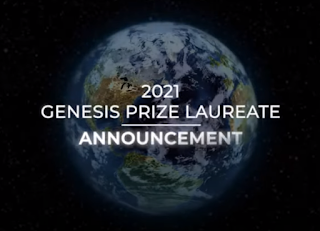 Even in the year of the pandemic, the Genesis Prize isn’t going to scientists or doctors, but keeps going to vapid anti-Israel celebrities and wealthy activists whose Jewishness is a genetic accident of chance, and who use the $1 million prize to fund leftist and anti-Israel causes.

So it was inevitable that Steven Spielberg would win the prize in 2021 and quickly direct it to black nationalist and leftist groups who loathe Israel and Jews.

On Spielberg’s list is Avodah, which has multiple personnel who overlap with the anti-Israel hate group IfNotNow. IfNotNow stages protests against Jewish community groups to pressure them to end support for Israel and embrace the Islamic terrorists trying to destroy the Jewish State.

Avodah New Orleans even came out in support of BDS.

Becca Lubow, Avodah’s organizer was one of IfNotNow’s activists who followed Democrat presidential candidates on the campaign trail to convince them to oppose Israel. and posed with Senator Bernie Sanders holding a banner reading, “Jews Against the Occupation”.

When documentary filmmaker Ami Horowitz asked Lubow about Hamas, she refused, stating, “I have to be careful because I’m cognizant of consequences for certain things I could say.”

Is this Genesis’ idea of “inspiring Jews to connect to their heritage and to Israel”?

Avodah has its toes in the same pool of organizers as IfNotNow with personnel and volunteers like Rakhel Silverman, Hannach Recht, Leah Shefsky, Nina Bernstein, Rachel Brustein, and a number of others. Some, like Eliza Klein, went from JVP, which supports BDS, into Avodah.

Funding Avodah puts fungible money into the infrastructure of anti-Israel activism which is at odds with the Genesis Prize mission statement of support for Israel.

Also on Spielberg’s list is the Collaborative for Jewish Organizing, an umbrella group that includes Bend the Arc and theincredibly toxic Jews for Racial and Economic Justice which has denied Muslim antisemitism. Bend the Arc is backed by Soros’ son and run by a sex club dancer turned anti-Israel organizer. A board member of Bend the Arc has accused Jews of “sustaining white supremacy” and it’s intertwined with anti-Israel protest hate group IfNotNow.

As Tablet Magazine reported, Dove Kent, Bend the Arc’s senior strategy officer and the former director of Jews for Racial and Economic Justice, had co-founded an organization providing “coaching, training, culture and infrastructure support” to IfNotNow. Bend the Arc’s digital organization manager is a member of IfNotNow’s digital strategy team.

Carolina Jews for Justice, another member of the CJO umbrella group, includes Brandon Mond, “an active leader on the local and national level of IfNotNow” and Salem Pearce, a former director of organizing at the anti-Israel group T’ruah.

Alana Alpert, the co-founder of Detroit Jews for Justice, a CJO member, signed an IfNotNow letter claiming that accusations of antisemitism are being wielded against “progressives, especially Black and Palestinian progressives who criticize the Israeli government”. Alpert has been a defender of Rep. Rashida Tlaib. Carin Mrotz, the head of Jewish Community Action, also in the JCO, signed the same IfNotNow letter, and has defended Rep. Ilhan Omar.

The Genesis Prize, created to “foster Jewish identity, inspire Jewish pride and strengthen the bond between Israel and the Diaspora” was instead aiding some of the worst anti-Israel groups.

None of this was surprising from Spielberg, who attends Sharon Brous’ anti-Israel temple and whose big Israeli project was Munich, an exercise in moral equivalence between Israel and the terrorists written by anti-Israel leftist Tony Kushner who had said Israel should not have existed.

But this sort of thing happens to the Genesis Prize more often than it should.

In 2018, Natalie Portman received the Genesis Prize for, as far as anyone could figure out, being of Jewish descent and being famous. Portman, formerly pro-Israel had turned against the Jewish State, and refused to even show up to accept the award.

“We have followed the recent news from Gaza with growing worry, and we are concerned that it is not appropriate to hold a ceremony given the government’s actions and the latest escalation,” Portman’s note allegedly said, using the royal ‘we’, to condemn Israel’s fight against Hamas.

In a follow-up statement, the mediocre leftist actress attacked Netanyahu and whined that “the mistreatment of those suffering from today’s atrocities” was not in line with her values.

Portman’s values, which are up there with her acting, didn’t stop her from going to a film festival in Beijing two years earlier to promote her movie depicting Israel as a dysfunctional society.

Getting its honorees to even accept the awards has been a problem for the Genesis Prize.

The year before, the Genesis Prize had gone to Anish Kapoor, a leftist Indian artist from the UK who happened to have a Jewish mother, and whose art is as bad as his politics.

Kapoor had previously made headlines for his sculpture in Versailles titled, “the vagina of the queen” which consisted of a giant rusted steel pipe.

He’s also defended antisemitic Labour leader Jeremy Corbyn by arguing, “you can be anti-Zionist and pro-Palestinian without being antisemitic” and ISIS, saying, “there’s an atmosphere of vilifying Muslims for having extreme views. If I was a young Muslim, would I feel angry enough to have joined ISIS? I would at least think about it.”

If your Jewish pride isn’t ‘kvelling’ enough yet, Kapoor responded to the Genesis Prize award by asking them to cancel the ceremony “while children are being killed with chemical and other horrible weapons on Israel’s doorstep.” By that he meant Syria, rather than Israel, and donated his prize money to Syrian refugees. Some of the money went to HIAS, which focuses on resettling Syrian Muslims in America while, in traditional leftist fashion, bashing Israel.

That’s about as good as it could have gone considering that Kapoor has been a vigorous defender of allowing ISIS bride Shamima Begum to return to the UK.

Genesis Prize laureates have hovered between the worthy, the awkward and the embarrassing.

As the first ‘laureate’, Michael Bloomberg, a billionaire wealthier than his honorees, gave the $1 million award, or 0.1% of what he spent on his failed presidential bid, to everything from Israeli smartphones for the disabled to installing energy efficient systems in Canadian houses. Michael Douglas, the second laureate, used the money to fund acceptance of interfaith marriage.

But despite some worthy honorees, the Genesis Prize misses more often than it hits. Its strategy of honoring celebrities who happen to be Jewish has backfired badly.

In 2021, the Genesis Prize had a shot at redemption. It could have honored Rabbi Jonathan Sacks, the UK’s former Chief Rabbi, a leading Jewish thinker and campaigner against antisemitism, who had passed away that year and whose death had been mourned by everyone from the British Royal Family to world leaders to Jewish communities around the world.

Other finalists for the 2021 award, beyond Rabbi Sacks, included Barbara Streisand and Sacha Baron Cohen. Albert Bourla didn’t make the cut. The “Throw the Jew Down the Well” guy did. It didn’t occur to anyone at Genesis to consider Mikael Dolsten, Tal Zaks, or any of the Jewish scientists involved in fighting the pandemic, but Barbara Streisand was on the list.

Could there be a worse indictment of the misguided values of the Genesis Prize?

The Genesis Foundation claims that it has a vision of a “strong and vibrant Jewish people” that is “united in appreciation of Jewish values and support for the Jewish State.” And that’s a noble vision that it might best fulfill by fundamentally rethinking everything it’s done and is doing.

Either that or it can best help Jews and Israel by closing up shop and going away.

The Jewish organizational world already has no shortage of vapid organizations that exist just to give celebrities awards while funding the non-profit industry that incubates leftist activists. But the Genesis Foundation has become especially egregious because it repeatedly violates its own claim to be helping Israel and the Jewish people by rewarding some of the worst actors.

In both senses of the word. 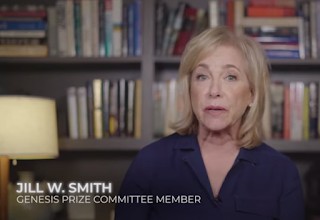 The Genesis Prize is not fulfilling its mission of “inspiring Jews to connect to their heritage and to Israel”, instead it’s become a third-rate awards show for anti-Israel lefty celebs who have to be cut a million dollar check in the hopes of even getting them to show up.

The ‘laureates’ are supposed to embody a commitment to Jewish values and Israel. Can anyone explain how Anish Kapoor fit that bill? Maybe ISIS and Jeremy Corbyn can help.

The Genesis Prize was created to make American Jews more pro-Israel. Instead it’s become just another American ‘foundation’ funneling cash to the organizations of the anti-Israel Left.

The Genesis Prize Committee lists only 5 members, two of them, including Elie Wiesel, are deceased. At the top is Morris Kahn, an Israeli billionaire and space pioneer, who has been funding much of Genesis, and Jill W. Smith, a “senior advisor to the chairman” whose bio boasts of helping fund Avodah which was created with seed funding from the UJA Federation.

The activists protesting Israel were routinely created by the infrastructure of federations.

If the Genesis Prize Foundation wants to exert a positive influence on American Jews, the first step is to stop funding the problem and start funding solutions. The alternative is to keep on writing big checks to lefty billionaires who will use them to create more anti-Israel activists.

And then Israel, America, and the world would be better off without the Genesis Prize.