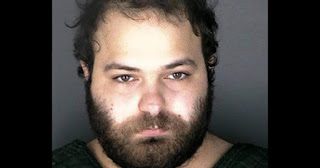 The municipality had already gotten a small taste of Islamic terror when one of its residents pled guilty to supporting ISIS six years ago. Shannon Conley, an American convert to Islam, was busted after she began attending services at the Faith Bible Chapel of Arvada while wearing a Burka. Worshipers noticed her taking notes and making sketches, and contacted the FBI.

Conley told the FBI, “if they think I’m a terrorist, I’ll give them something to think I am.” Authorities found videos of Al Qaeda leader Anwar al-Awlaki and other Jihadist material.

“Even though I supported a Jihad, it was never to hurt anyone,” she claimed in court.

Al-Awlaki, who attended Colorado State, headed its Muslim Students Association, and preached at the Denver Islamic Society, casts a long shadow over Colorado even after his death.

But Arvada really hit the big leagues of Islamic violence when a member of a large Syrian Muslim family went on a killing spree in a supermarket in Boulder, Colorado.

Ahmad Al-Issa’s massacre at a King Soopers supermarket claimed 10 lives. And it was one of a series of ugly incidents involving the Syrian Muslim who had a history of accusing non-Muslims of Islamophobia. One of his classmates was even violently assaulted by the Syrian immigrant who claimed that he had been called a terrorist.

In the latest development, Ahmad Al-Issa has been charged with not only 10 counts of murder, but 34 counts of attempted murder. His lawyers and the media have attempted to argue that he is mentally ill. That same argument was used in Shannon Conley’s case.

And that of countless Islamic terrorists.

Crazy or sane, the Al-Issa clan has been something less than a blessing to Colorado.

Ahmad’s older brother, Imad, had been arrested twice on weapons charges and the police were called during an altercation with his common law wife to whom he was married under Sharia law, but not American law. The woman in question has since passed away.

The Al-Issa clan had migrated to America from Raqqa, later the capital of ISIS, the year after September 11, and started out in Aurora. The Aurora council voted unanimously last year to continue resettling refugees. Aurora is a hub of the Muslim presence in Colorado.

Colorado’s Muslim population more than doubled in a decade and stands at an estimated 70,000. Much of that population comes from the same basic region as the Al-Issa clan.

The Colorado Muslims Community Center, the largest mosque in the state, is based out of Aurora. Its Imam, Karim Abuzaid, was compared by one Muslim to Anwar Al-Awlaki.

Al-Awlaki keeps coming up because the dead Al Qaeda leader had headed the Muslim Students Association at Colorado State which was a project of the Muslim Brotherhood. ICNA is entangled with the Brotherhood, and Abuzaid had appeared at ICNA events.

Colorado’s biggest mosque hosted the worst Islamists like Siraj Wahhaj, an unindicted co-conspirator in the World Trade Center bombing, who had told followers, “You don’t need nuclear weapons or even guns! If you have faith in Allah and a knife! If Allah wants you to win, you will win!” and “if 6-8 million Muslims unite in America, the country will come to us.”

Karim Abuzaid has delivered lectures urging Muslims to convince Americans to accept Sharia law, and defended Sharia punishments such as flogging and stoning. Videos of Abuzaid’s rants boast titles like, “Why EVERY Muslim Believes in SHARIAH & JIHAD”.

“O Allah, make this Ummah follow the rightly guided way, in which the obedient people are honoured and the hypocrites and the infidels will be humiliated and the sinners will be exterminated,” he had prayed at the mosque.

And he had promoted at least one Islamist text which urged “propagation of Islam or call to Islam until all countries embrace it and make it their way of life. If someone makes any obstacle in the way of propagation, Muslims are allowed by Allah to fight them until Islam becomes the governing authority.” Last year he had declared that the Caliphate was coming back.

It’s unknown if the Al-Issa family had any connection to the Colorado Muslims Community Center, but considering its size and proximity, a half hour drive away from the Al-Issa family home, and Abuzaid’s prominence in the community, they very well might have utilized its facilities or listened to his hateful rants.

The Islamic Center of Golden, the closest mosque to the Al-Issa family home, features an ICNA booklet touting Sharia aimed at non-Muslims. It promotes a video by Imam Omar Suleiman who had celebrated terrorism, and defended the Sharia practices cutting off the hands of thieves and forcing women who had been captured in Islamic raids into a life of sex slavery.

“God willing on this blessed night as the 3rd Intifada begins, the beginning of the end of Zionism is here. May Allah help us overcome this monster, protect the innocent of the world, and accept the murdered as martyrs,” he had tweeted during Israel’s fight against Hamas terrorists.

Suleiman has also made it very clear that he’s a supporter of the Muslim Brotherhood.

The Islamic Center of Golden also recommends books by Tariq Ramadan, the Islamist grandson of the founder of the Muslim Brotherhood who has been accused of sexually exploiting and abusing numerous women under the guise of Islamic law, Hamza Yusuf, a contraversial Islamist figure, and two books by Jonathan Brown, a Muslim convert who had defended Islamic slavery, arguing, “I don’t think it’s morally evil to own somebody.”

The Islamic Center also has an arrangement allowing it to collect a percentage of purchases made by its worshipers and supporters at King Soopers. The mosque is popular with college students, especially foreign students, and Ahmad Al-Issa, who later shot up a King Soopers, might have felt comfortable there among other young foreign Muslims around his own age.

What influence did this Islamist environment have on the Boulder supermarket killer?

Ahmad Al-Issa’s lawyer, his family, and the media have tried to claim that he’s suffering from some unspecified mental illness. And yet even the media’s reporting reveals a common thread of paranoia and hatred toward non-Muslims by the supermarket mass murderer.

Where did that come from? That’s a question no one is asking or is being allowed to ask.

Arvada, Aurora, and the other Colorado cities and jurisdictions that went all in on refugee resettlement have shown no willingness to question the poor decision they made in 2020. And as Biden tears open the refugee cap to maximize the open borders flow of terror immigrants to this country, there will be more massacres like the one at King Soopers.

Those officials who aided and abetted the disaster will work hard to shut down any questions.

Law enforcement and the media are currently fascinated by the “extremely large size” of Ahmad Al-Issi’s magazine while showing no interest in what motivated the Syrian immigrant to kill 10 Americans. The New York Times headlined its story about the Al-Issa clan as, “An Immigrant Family Caught Up in a Distinctly American Tragedy”.

But was it an American tragedy or a ‘distinctly’ Syrian tragedy for Americans?

As Biden dismantles the ban on travel from terror states and reopens the refugee resettlement machine, there will be many more tragedies in America made in Syria, Iraq, and Pakistan.

And no one will take a look at the environment of mosques and imams, listen to their hate and hear their predictions of an apocalyptic war between Islam and the rest of the world, and consider whether our refusal to see the war waged against us is the true ‘American Tragedy’.

How the Left is Trying to Destroy Martin Luther King Jr.'s Dream