Governor Andrew Cuomo is many things: a mass murderer, a sexual predator, and a sore loser. 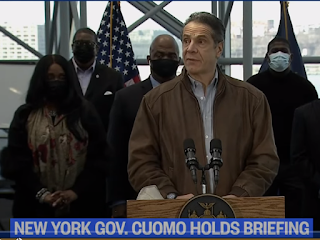 Now the census is done and New York is going to lose a House seat by 89 people.

“We’re looking at legal options, because when you’re talking about 89, that could be a minor mistake in counting,” Cuomo whined.

The ‘9’ is fitting because that’s the number of women who accused him of sexual harassment.

Maybe it’s a minor mistake like the time Cuomo’s aides rewrote a report to hide the real death toll in nursing homes as he was prepping his book on his brilliant leadership during the pandemic. A report by New York’s Attorney General Letita James estimated that the undercounting might have been as high as 50%. But minor mistakes do happen.

Even 0.5% of the 15,000 nursing home patients dead on Cuomo’s watch might have saved the House seat. If Cuomo had been 0.5% less of a psychopath, New York might have kept its seat.

Sure, go look at your legal options. There was already a precedent on the subject for another whiny tyrant in the Book of Kings, “Would you murder and also inherit?” (1 Kings 21:19.)

New York not only lost a House seat, despite Cuomo’s attempt to bluster about his legal options, but it deserved to lose it. The state was already losing its population due to people fleeing Democrat mismanagement. Last year, New York was number one state in declining population losing over 126,000 people. In the last decade, the state’s population grew by 0.4 %.

But there’s a difference between taxing people into leaving and mass murdering them.

It’s the difference between socialism and national socialism.

Cuomo didn’t give a damn about the elderly with the exception of his mother. The equity grants for census outreach were littered with organizations like the Arab American Community Center for Economic and Social Services, Refugees Helping Refugees, Bangladeshi American Community Development, and the Yemeni American Merchants Association.

Cuomo’s sociopathy is a reflection of his party and political ideology which cares a great deal about identity politics, but can’t wait for the elderly to die off.

During the worst of the pandemic, Cuomo threw another $10 million at the census. If only he’d spent that money keeping nursing home patients alive. While the dead can be counted in Democrat elections, counting them for the census has proven to be trickier.

Handing out cash to community groups didn’t compensate for the people who were dying.

Cuomo, like every good Democrat, blamed New York’s poor numbers on President Trump, “You had undocumented people who were nervous to come forward,” he suggested, complaining that illegal aliens were being undercounted. “The federal government had a chilling effect.”

Democrats forced the citizenship question off the census. The only ‘chilling effect’ was in the morgues where the victims of Cuomocide were unable to fill out census forms.

President Trump is out of office, but Cuomo’s statement still raved about the “Trump Administration’s xenophobic, flagrant, and illegal efforts to hurt blue states by discouraging non-citizens and people of color from being counted” and vowed that, “we won’t allow Trump and his cronies to use one of our greatest attributes — our diversity — as an impediment.”

Despite Cuomo’s vocal enthusiasm for diversity, he only seems to have sexually harassed white women raising serious doubts about his belief in diversity. Until he sexually harasses as many illegal aliens as he does Americans, we can’t trust his commitment to diversity.

Cuomo then asked Attorney General Letitia James, who is already investigating his sexual harassment and nursing home deaths to do something about the census.

Maybe she would have more time to investigate the census, if she weren’t investigating Cuomo.

Challenging the results of tallies is an attack on democracy and the rule of law, except when Democrats do it because the numbers didn’t go their way, and Texas wins and New York loses.

Mayor Bill de Blasio, in his usual fashion, is blaming the whole mess on Cuomo, and raising questions about where that $70 million even went. That’s a good question. So is the question of where the $850 million for ThriveNYC mental health that De Blasio’s wife was managing went.

Curiously though, responses appeared to drop sharply in more conservative upstate counties since 2010. Maybe a whole bunch of Republicans decided that there was no point in participating in an exercise which just empowers a one-party state operating out of Albany.

In Lewis County, which President Trump won, self-response rates dropped from 66% to 44%, in Jefferson County, they fell by 10%.

The issue wasn’t Cuomo’s beloved illegal aliens. 7 years ago, Cuomo had declared that there was no room for conservatives in New York. Did they take the political thug at his word?

Cuomo and his Democrats will do everything in their power to see that it’s a Republican House member who loses his seat, but that will just lead to lower response rates. A census is also an election and poor response rates are a vote of no-confidence in the system and political elites.

And just as with the pandemic, Cuomo is trying to blame the failure on everyone else.

After allocating $70 million, Cuomo still felt short by 89 people. That wouldn’t have happened if he hadn’t presided over massive political alienation and a record death toll in New York.

Throwing tens of thousands of dollars at Yemeni merchants isn’t fixing that.

New York, a state with, according to the census, a population of some 20 million, was responsible for as much as a tenth of the nation’s pandemic death toll. Stalin said, “A single death is a tragedy, a million deaths are a statistic.”

But the statistics are adding up and they’re not going Cuomo’s way.

Cuomo had responded to nursing home deaths by arguing, “Who cares [if they] died in the hospital, died in a nursing home? They died.”

Finally, after thousands died and 89 were missed in the census, he has a reason to care.

The State of Abortion 2021 -- Part Three in the Series