“DOE is thrilled to bring on these dynamic leaders, who understand the urgency of the climate crisis and will help us seize opportunities to deploy the clean energy technologies of the future,” Department of Energy Chief of Staff Tarak Shah declared.

Tarak Shah, whose DOE bio boasts that he is “the first person of color, first Indian-American, and first openly LGBTQ person” to run the department into the ground, was touting Jigar Shah, no relation, as one of the “dynamic leaders” who will “build our energy economy back better” and create “millions of good-paying union jobs” and help the “the hardest-hit communities.” 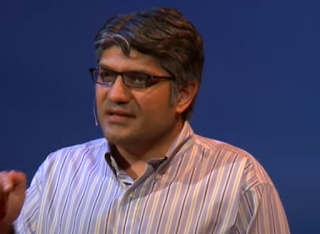 Politico gushed that Jigar Shah (pictured above) was a “green finance legend” who didn’t need an “obscure government job running a loan program”. Shah was nobly taking on the thankless job because “climate change had created an all-hands-on-deck emergency”. Also the “loan program” will allow him to play with some $22 billion in government loans. That ought to be an interesting gig for a “legend” who had been working with hundreds of millions and 4 listed companies.

The Shah puff pieces routinely pass over SunEdison. Politicoonly mentions that he was “the founder of the pioneering solar firm SunEdison” while the DOE press release briefly mentions that he “founded SunEdison, a company that pioneered ‘pay as you save’ solar financing.”

SunEdison also represented one of the biggest green energy bankruptcies, bigger than Solyndra, while benefiting from as much as $1.5 billion in government grants and subsidies.

The bankruptcy happened well after Shah’s time, but SunEdison is hardly a success story.

SunEdison was how Shah became famous, he spent 5 years as its founder and CEO, and was the time that he tested his theories by running an actual green company, instead of investing money in them. And the story of the SunEdison disaster is especially relevant as the Biden admin prepares to subsidize Big Green companies and their bankruptcies. Again..

Once upon a time Shah was dubbed the “King of Solar” or the “Kanye West” of solar.

SunEdison, through its future parent company/incarnation, run by Ahmad Chatilla, who was known as the CEO of SunEdison after Shah, amassed $1.5 billion in subsidies. By 2015, well after Shah left, SunEdison had been ranked as the 13th most subsidized company in America.

While Solyndra’s bankruptcy made it infamous, SunEdison actually scored more grants and guarantees. Its bankruptcy touched off a legal battle, revelations of ties to the Obama administration, and George Soros (for once in a financial role), along with the destruction of $10 billion in market value that took a stock trading at $30 to pennies and then a delisting.

The complicated financial mess that brought down SunEdison happened long after Shah had decamped, but the underlying problems with businesses dependent on selling unreliable power sources, solar and wind, backed by government subsidies, were always there. SunEdison’s reports routinely mentioned the vital role of subsidies in the company’s business model.

After SunEdison, Shah’s other claim to fame is setting up Generate Capital alongside Scott Jacobs, a former Obama adviser, to make investments in green companies. Generate touts its links to only 4 companies. The most notable company is BYD, a Chinese company heavily backed by the country’s Communist regime. The Alliance for American Manufacturingnoted allegations of “deep personal ties between BYD’s leadership and China’s state apparatus — including the military — along with significant state subsidies and other support.”

Most damningly its founder “has held a number of official communist party posts” and that “Wang Zi-dong, who serves as independent non-executive director of BYD”, “also directs research at an institute that is part of Norinco Group, the state-owned defense conglomerate;”

“The purpose of this is to go national,” Jigar Shah had declaredof the alliance between BYD and Generate. National may be the last place we want BYD going in America. But Shah has a different perspective on the Chinese Communist economic campaign against America.

In 2011, Jigar Shah, as head of the Coalition for Affordable Solar Energy, had fought efforts to stop Chinese solar dumpingas part of the regime’s longstanding trade war on America.

Generate and BYD’s alliance to finance the leasing of Chinese buses in American cities hit a snag when President Trump banned using taxpayer money to pay for the buses. BYD then made headlines with its bizarre $1 billion deal for masks with Governor Newsom in California.

BYD buses were already problematic with a Los Angeles Times investigation finding that the buses had to be pulled after they were found to be unreliable after 100 miles. The buses failed in multiple cities, but money kept flowing to the Chinese company because of Democrat ties.

As the LA Times noted, BYD’s “business model involves hiring lobbyists and grant writers to secure no-bid purchases by public agencies, and it has invited public officials on foreign junkets and employed their close associates.”

The story came out in May 2018. Generate Capital announced its deal with BYD in July 2018.

But that sort of thing just happens when you’re out to save the planet from affordable energy.

The stories of SunEdison, one of the biggest green bankruptcies in this country, and Generate Capital, helping Chinese Communists cash in on taxpayers, is the problem with Big Green in microcosm. Big Green was created and sustained by government subsidies.

“If the federal government was really going to launch an all-out war against the greenhouse-gas emissions that are broiling the planet, Shah was willing to enlist,” reads Politico’s story on Shah.

The framing is more shameless than any SunEdison or Generate Capital press release. That is also a sign of just how bad things have gotten as the media labors to give us more Solyndras.

Rebooting the DOE’s loan program requires a lot of spin to keep people from thinking about Solyndra. Instead the Democrat and media backers of a loan reboot are citing Tesla. But call it what you will, green loans are government subsidies for businesses whose business model is built on more subsidies and mandates. Green energy is a government pyramid scheme a million times worse than anything Madoff did because its victims are taxpayers and every American.

If you want electric cars, you don’t make an electric car that’s better than the real thing. Instead, you subsidize an electric car company and its business model is to cash in on carbon credits which are bought by companies making actual cars who pass on the costs to car buyers.

The $50K electric car bought by a Facebook employee is funded by a dozen working class people buying Hondas. It’s a vampiric industry that feeds off looted money all the way down.

Some people get very rich doing this while most Americans become invisibly poorer as their cost of living rises. This invisible theft is manifested in higher prices for transportation, power, food, and every necessity of life without most people even realizing they’re being robbed.

The best possible outcome of any DOE green energy loan is the company going bankrupt. The worst outcome is the company finding a way to sustain its parasitic existence on a combination of loans, subsidies, and mandates so that it’s robbing Americans not just once, but every day.

This green graft industry would not exist if not for an imaginary crisis and “all-out war”. And in the “all-out-war” against the weather and the atmosphere, the first casualty is the truth.

Dr. Fred Eichelman: A Target For Spam, I Yam