“I Started to Think This is a Bad Guy”: Andrew Cuomo’s Biographer on the Governor’s Brutish History,” a Vanity Fair headline blares.

The biographer, Michael Shnayerson, is the author of The Contender, a biography of Cuomo, of which the author on his site writes, “I think the picture that emerges is ultimately a positive one.”

In the recent article, he however fusses, “I discovered that much of Cuomo’s M.O. and many of his character flaws… have been evident for years.”

Just not so evident that anyone in the media would actually write honestly about them. 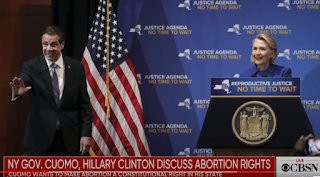 In Vanity Fair, Cuomo’s biographer mentions the time that his subject was accused of sexual harassment. “HUD’s inspector general, Susan Gaffney, was a woman who dared to speak up, so she became a target,” he writes. Gaffney did indeed speak up and became a target. And The Contender followed the usual Cuomo line of treating her allegation of sexual harassment as absurd nonsense. The suggestion that Gaffney had gone over the edge goes unchallenged.

“To the astonishment of all in the Cuomo camp, Gaffney soon after filed a formal complaint against Andrew and most of his inner circle, accusing them of sexual harassment and discrimination,” Shnayerson dismissively writes. “Exhibit A: the wink.”

The real reason that the story is explosive isn’t just because twenty years ago, for the first time, Cuomo was accused of sexual harassment, it’s that Democrats vigorously backed Cuomo up.

At a Senate hearing in which Gaffney made her case, warning of Cuomo’s campaign of dirty tricks, Senator Susan Collins and Senator Fred Thompson, both Republicans, were supportive. Meanwhile Rep. Tom Lantos appeared to be cooperating with the Cuomo smear campaign.

There was something bigger at stake in the Cuomo-Gaffney case than sexual harassment.

Gaffney and her people had been digging into some shady behavior by Andrew Cuomo.

Heading up HUD had been a consolation prize from Bill Clinton to the Cuomo family. Mario Cuomo, Andrew’s father, had been projected as the leading Democrat presidential candidate. After Mario chose not to run, Andrew Cuomo and the Clinton administration had been negotiating over a Supreme Court seat for his father which never came to pass.

The HUD job wasn’t glamorous, but it offered all kinds of useful opportunities including allegedly a developer who acted as a major financier for Cuomo in his personal and political life. Some of Cuomo’s decisions back then would help put the country on track to the subprime crisis.

Destroying Gaffney became a major priority not only for Cuomo, but for Democrat elected officials because she had touched the third rail of the Democrat patronage machine by investigating housing fraud. Cuomo and his Democrat cohorts launched an unprecedented campaign to smear an inspector general of their own agency as a vicious racist.

At its peak, a Cuomo crony declared that Gaffney “is under investigation by the FBI and members of Congress, that a dozen of her employees have made racial complaints against her, that the bipartisan U.S. Conference of Mayors has passed formal resolutions on a pattern of racism by the IG and that Deval Patrick, the former associate attorney general for civil rights, is now investigating her on the most serious charges of racism in the department’s history.”

The tactics that Cuomo previewed against Gaffney would be utilized to secure the governor’s mansion and suppress critics and accusers. All of that could have been prevented, but the Democrats chose to stand against an inspector general, who had been appointed by Bill Clinton, and with Andrew Cuomo, who had a political future in New York and maybe D.C.

Why would any Democrat take on a possible future senator, governor, or even president?

Cuomo’s allies included numerous House Democrats, and Deval Patrick, the future governor of Massachusetts, and Obama’s favored presidential candidate. And some journalists speculated at the time that Cuomo’s campaign had the tacit approval of the Clinton administration. It would be rather surprising if it did not when you consider its sheer scope.

If the Clintons had signed off on the campaign, it would not have been the worst abuse by a corrupt clan that counted Jeffrey Epstein among its friends, and which had been accused of sexual assault and victim intimidation. Bill Clinton had described Cuomo’s father as a mafioso in a conversation with Gennifer Flowers. Clintonites in the media attempted to claim that the conversations were fake, with George Stephanopoulos eventually admitting that they were real, but arguing that “they were selectively edited in a way — to create some — some impression.”

What better qualification could there be for a position as a top journalist at ABC News?

Whether it was Clinton’s abuses or Cuomo’s abuses, the media has a history of denying the obvious for as long as possible until it becomes politically opportune to finally tell the truth.

The truth won’t mean reporting honestly on Cuomo’s nursing home death toll or his role in the subprime mortgage crisis. Cuomo is one of those unique politicians who did more damage to the country than any dozen natural disasters and tops the casualty toll from some wars. And yet the only thing the media wants to topple him for is his recent history of sexual aggressiveness.

That too doesn’t come as much of a surprise in a state where a Cuomo predecessor, Governor Elliot Spitzer, was accused of having a thing for choking women. Attorney General Eric Schneiderman, who was being touted as a potential governor down the road, resigned after being accused of choking and threatening to kill a number of women. There’s a pattern here.

And this kind of thing is practically a requirement for Democrat politicians in Albany.

In some cases, such as Jeffrey Epstein, the #MeToo issue is the issue. But with politicians, whether it’s Bill Clinton or Andrew Cuomo, it’s the topper on a layer cake of much worse crimes. Bad people abuse power in proportion to how much of it they have and top elected officials have a lot more scope for abusing power than movie producers or hedge fund tycoons.

The media is determined to help Democrats cover up for Cuomo, even as they’re trying to bury him by concentrating on the set of #MeToo allegations that are the least damaging to the Dems. That way the Sandernistas who are trying to take down Cuomo can smoothly step into his place. The party gets a shakeup, but the same old dirty business can continue on in Albany.

#MeToo is only a symptom of the sociopathic abuses of power by Cuomo. The bigger issues, the bodies and the dollars, would do too much damage to the same corrupt Democrat system that had enabled Cuomo all these decades. And the system is protecting itself even now.

No one knew anything for decades, but now everyone always knew everything. Like old Stalinists after Khruschev’s speech, the former Cuomosexuals line up to denounce him.

The truth is that they all knew. And what they still know is a lot worse than what they’re telling.

After all this time, the media still won’t touch Cuomo. Not where it could hurt the Democrats.

Gen. Michael Flynn: How an Adversary Comes Inside of Our Home