Shootings have more than doubled in Portland from 111 last year to 275 so far this year. Murders are also up from 2 to 25. That’s an increase of over 1000% for the prog utopia. 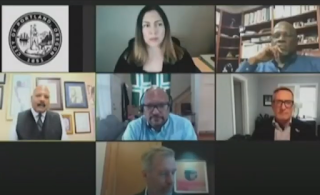 Things are so bad that Mayor Wheeler, who narrowly won reelection over the Antifa candidate after having his apartment building firebombed, pleaded with the City Council to pay for more cops. But the City Council had a better idea: unarmed park rangers with pepper spray.

Or try to take them on with the awesome power of their pepper spray.

Another $3.5 million will be tossed to the Council’s leftist “community group” allies.

“This proposal is the kind of collaborative problem solving I expected from our historically diverse council where the majority are grounded in community,” Commissioner Jo Ann Hardesty boasted. The Portland City Council isn’t grounded: it’s high on its own insane leftist politics.

Hardesty is famous for three things: her calls for defunding the police, her calls to be made police commissioner, and her call to the police when she got into an argument with her Lyft driver because he wanted to keep the window open. Commissioner Hardesty didn’t call a park ranger when the Lyft driver asked her to leave his car, but everyone else is supposed to.

“Historically, one of the ways we’ve dealt with gun violence is to flood, frankly, Black neighborhoods with cops, often violating civil rights. This is not a strategy Portlanders are willing to carry into the 21st century,” Commissioner Mingus Mapps declared.

Meanwhile, bullets slammed into a children’s center at child level.

Mapps however explained that the Portland City Council was trying to reimagine public safety and criticised the failure to put all the stories of the shootings, “into the context of the broad and deep reforms that this council is trying to do around the issues of equity, race, and public safety.”

Portland’s reimagining of public safety is eliminating the safety part and replacing it with equity.

The City Council had eliminated the Portland Police’s Gun Violence Reduction Team leading to an even worse outbreak of mass shootings and refused Wheeler’s call to bring them back.

They also turned down a direct appeal from black residents and officials, including Pastor J.W. Matt Hennessee, the senior pastor of the Vancouver Avenue First Baptist Church, who reported being on a Zoom call when bullets began flying near his church.

“You could still smell the gunfire in the air and I talked with the police officers when they showed up,” Pastor Hennessee recalled.

“If investments are not made, that just means more people are killed,” he warned.

The Portland NAACP however ranted that the police are racists who “maintain the blight of our communities, reinforces the racists stereotypes and tropes against Black people, and does nothing to repair the harm of generations of racism and white supremacy.”

It’s hard to tell what’s worse, the NAACP’s spelling or its blatant disregard for human life.

“Instead of maintaining weapons of war,” the NAACP statement said of the Portland police, “it can shift those funds into community-led solutions”.

While the 24 new unarmed park rangers won’t have any “weapons of war”, like guns or any ability to defend themselves beyond calling the police to ask for help, they do have “de-escalation” and “anti-bias” training which should terrify any gang member.

A longtime park ranger however told a reporter that someone needed to tell the City Council that the rangers are not the police and “have less authority than a parking patrol attendant”.

A spokesman for one of the Council members proposed that the rangers would “be a calming influence”. Meanwhile a ranger explained that the only thing they can do is call the police or try to ban people from the park, but only if they provide their names and phone numbers.

A Portland Police Bureau bulletin shows how well the plan to replace cops with park rangers is working. The park rangers “approached a group about 9:00a.m., intending to distribute fliers informing the group that the park was going to be closed for restoration work. Graves threatened to kill them, and although they did not report being threatened with a weapon, Graves followed them yelling threats to kill them as they tried to disengage.”

That was the de-escalation training, a favorite of pro-crime criminal justice reformers, in action.

“About 45 minutes later, another team of Park Rangers responded to a fire burning in the park, which is a violation of park rules. Park Rangers reported requesting assistance from Portland Police as they went to address the fire. Graves pulled out an axe and threatened the Rangers If they did not leave.” And then the police finally had to step in to stop the aspiring axe murderer.

Meanwhile the bodies keeps piling up as Portland’s gang members and drug dealers rush to be the city’s hundredth murder victim or murderer, while their stray bullets take out random people walking down the street and hoping not to die because their city council puts criminals first.

Since the Portland City Council doesn’t want to fund the police, the FBI is stepping in to do it.

The Oregon FBI described Portland’s situation as a “public safety crisis” and is offering to provide money and personnel. But why should the country’s taxpayers be on the hook for a calculated decision by the Portland City Council to turn their own city into a war zone?

Every single Portland commissioner is on record as opposing even Wheeler’s modest plan to use police to fight the shootings. The voters elected to have leftist radicals run their city.

While it might be cruel, they should pay the price.

Portland Democrats decided to make their city into a laboratory for criminal justice reform. They’re keeping the dream of the 70s alive in Portland while reimagining public safety. The bodies of the murder victims are just experimental subjects in their pursuit of utopia.

“If this is not interrupted, this will be the deadliest year in Portland history,” Pastor Hennessee said at a press conference. “I don’t believe the City Council wants to have that kind of blood on its hands.”

Clearly it does. Portland’s City Council has seen the consequences and isn’t stopping.

There will be horrid lessons to learn from that, as there were from Soviet collective farms, Venezuelan economics, and the Khmer Rouge’s resettlement programs. And those lessons need to be learned by other lefty cities trying the same experiment. And by Americans.

Portland voters can stop this insanity, just as they did when they ended up backing Wheeler over the Antifa candidate. If they choose not to, they have blood on their hands.

Radicals and extremists don’t change on their own. Their followers, supporters, and enablers have to see for themselves the horror that has been unleashed. It’s unknown how many dead bodies it will take for Portland voters to wake up and realize what they’ve done.

Horrifying shooting numbers in Chicago, Baltimore, or Detroit are ignored because most people have become inured to the violence in minority urban areas, but Portland, like Seattle, was reimagined as a hipster paradise for upwardly mobile artistes and lefty activists. Seeing it descend into hell while the hipsters who moved there for the culture and the vibe flee, abandoning underwater mortgages and vegan dog bakeries, may be a wake-up call.

Not just for Portland, but for New York, Los Angeles, and the rest of lefty urban America.

Meanwhile the unarmed park rangers will be on the front lines of fighting crime. Or running from axe-wielding maniacs as fast as they can manage.

Greenfield: Earth Day is Killing Us