After North Korea’s latest missile test and a threat from Kim Jong-Un’s sister that if the Biden administration “wants to sleep in peace for [the] coming four years, it had better refrain from causing a stink”, the administration had a firm and unyielding response to the threats. 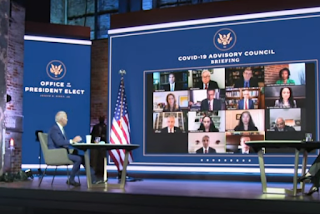 Officials told the media that the Biden administration sees North Korean missile tests as “normal military activity” and that they “don’t want a situation where it is perceived that our door is not open to talk.”

North Korea knows that Biden’s barn door is wide open. The snarling threat by Lil Kim’s sister was the first North Korean response to a month of diplomatic overtures from Biden.

That came after Biden’s people had waged a desperate campaign of “diplomatic outreach” to everyone from North Korea’s UN mission to Kim Jong Un’s hairdresser.

Yet another senior Biden administration official claimed that they had been reaching out “through several channels”, but “have not received any response from Pyongyang.”

The response finally came in the form of a missile launch and a vicious threat.

All of that is a long way from Biden’s tough talk on the debate stage when he attacked Kim Jong-Un as a “thug”, and vowed to meet with him only “on the condition that he would agree that he would be drawing down his nuclear capacity.” So much for that. Now Biden is begging the thug to talk on any terms and getting nowhere in that department.

Or in any other department.

Biden would like to get back into bed with the Islamic Republic of Iran. Not only was restoring Obama’s Iran nuclear sellout one of the biggest foreign policy pledges of his campaign, but the Democrat pol has been funded by the Iran lobby for much of his career.

He picked Rob Malley, the lead negotiator for the Iran deal, as his envoy to Iran, and a guy who loves Islamic terrorists almost as much as Biden loves groping protesting women.

With that kind of political pedigree, you would think that Tehran Joe could get a mullah or two on the phone. Unfortunately for Joe, even the mullahs have higher standards.

Iran’s foreign ministry turned down informal talks with the Biden administration, while the Bidenites pleaded for another chance.

“While we are disappointed at Iran’s response, we remain ready to reengage in meaningful diplomacy,” Biden’s White House pleaded.

Nobody else seems very interested in a meaningful diplomatic relationship with Biden that will include long walks on the DMZ beach, sipping champagne from radioactive warheads, and holding conferences that have no purpose except to make him appear competent.

Maybe that’s because they know that Biden’s meaningful diplomacy is meaningless.

Foreign Minister Javad Zarif, who had often met with Senate Democrats and top Obama officials during the Trump administration, initially suggested that Iran might agree to consider an “informal meeting … in which the United States is not a member, but is invited.”

That would have been the most awkward date ever, even by the standards of Joseph Robinette Biden Jr, a guy who likes smelling strange women’s hair in public, and Kamala Harris, who built her political career by dating a married politician twice her age.

But the Iranians decided that they couldn’t even participate in a meeting at which a United States representative was present, even if that rep, like Rob Malley, was really representing everything and everyone but America, possibly from George Soros to his father’s Egyptian Communist Party, unless there was money in it for Tehran in the form of direct sanctions relief.

Iran wants to be paid to even sit at the same table or it’s not coming. That’s not diplomacy: it’s prostitution. The only date Biden can get with Iran will cost billions of dollars. That’s a lot even for a five-star restaurant near the UN patronized by the corrupt diplomats of Turtle Bay.

How many billions will Biden’s blind date with terror cost? More than a billion. Or three billion.

Biden had told CBS’s Face the Nation that he was not going to lift sanctions on Iran to get it to negotiate with him. As usual, he was lying. Behind the scenes, the Biden administration was looking for a way to get sanctions relief to Iran without making it public.

Obama had illegally airmailed pallets of foreign currency on unmarked cargo planes. The Biden administration told South Korea that it could send a billion to Iran in exchange for releasing a tanker that it was holding hostage. But that’s still not good enough for Iran. It wants more.

After that initial $1 billion, the Islamic regime announced that the Biden administration had approved the release of $3 billion from South Korea, Oman, and Iraq.

Iran wants the full $7 billion from South Korea, some estimates place it at $8.5 billion, and there’s another $6 billion sitting in Iraq. It’s unclear how much of the money has been released yet, with Biden’s people vocally claiming that all of these reports are wholly and entirely false.

Iran’s Central Bank governor Abdolnaser Hemmati however has said, “The payment will be in cash which will be transferred to our banks.”

But whatever amount Iran has been paid hasn’t been enough to get it to sit at the same table with a bunch of Bidenites. That’s going to cost more than a mere $3 billion.

And if you think that’s absurd, Biden has paid out $3 billion without even getting his foot in the door. It’s going to cost a lot more than $3 billion to go to the actual formal negotiations and then to a renewed agreement which the Iranians will violate while laughing all the way to the bank.

Meanwhile, Biden can’t fulfill his campaign promise to revive the Iran Deal because the Iranians won’t even start negotiating with him on the best way to get America to pay for its nuclear program, until the Democrats start presenting the cash to the terrorists up front. Or no deal.

Having gotten nowhere with Iran on its nuclear weapons program, the Biden administration proposed resolving the mess in Afghanistan by asking “the United Nations to convene Foreign Ministers and envoys from Russia, China, Pakistan, Iran, India and the United States to discuss a unified approach to supporting peace in Afghanistan”. Too bad that 4 out of 6 of those countries actually benefit from an ongoing war in Afghanistan and want us to bear the brunt of it.

Iran is behind much of the terrorism on the planet: including in Afghanistan. Why would it want to work with Biden on bringing peace to Afghanistan when it can bring terror and death instead?

The Biden administration can’t answer that or anything else. Its solution to everything is to call some sort of multinational conference. The wave of proposed multinational conferences is as staggering as it is silly and pointless. Biden wants to partner with China on denuclearization for North Korea. But why would China want to relieve the pressure on America and South Korea?

That’s about as likely as Iran relieving the pressure on America.

When Biden ended support for the campaign against the Houthis in Yemen, the Iranian-backed Jihadist group whose motto is “Death to America” responsed by ramping up its attacks.

“Tragically, and somewhat confusingly for me, it appears that the Houthis are prioritizing a military campaign … over suspending the war and moving relief to the Yemeni people,” State Department special representative Tim Lenderking wondered.

Only a madman, an idiot, or a diplomat would think that it’s unexpected for an Islamic terrorist group to respond to appeasement by “prioritizing a military campaign” rather than providing relief for a famine that it had caused to begin with. But Democrats insist on being surprised by the obvious and the inevitable all the time. They’re surprised that Iran is demanding cash for negotiations and they’re surprised that their meeting with China was an even bigger disaster.

They’re surprised that North Korea isn’t interested in a meeting either.

Biden begs America’s enemies to negotiate and is then surprised when they demand that he pay for the privilege. And that makes sense. If the Democrats want North Korea or Iran to waste its time pretending to negotiate with them, there had better be a carrot or a stick involved.

Whether there’s a carrot or a stick won’t change the pointlessness of the negotiations. But if there isn’t a stick, then the dictators, tyrants, and terrorists want to be paid for their time.

If Biden wants to date Iran, the mullahs warn him that he’s going to have to pick up the check.

There’s only one enemy country that wants to talk to Biden and it’s the world power that Democrats use as both a pretext and a model for domestic repression in America.

Biden offered a five-year extension, no questions asked, and the Russians happily took it. Unlike Iran, they didn’t even make Biden pay them to humiliate his own country and undermine its national security. Now that’s what a good diplomatic relationship looks like to a Democrat.

Democrats may be striking out with North Korea and Iran, but they’ll always have Russia.

At least until they have to blame whatever horrible thing Hunter Biden did this time on Moscow.