In 2019, Rina Shnerb, a 17-year-old girl who had been hiking in Israel with her father and brother, was blown up by a bomb. Rabbi Eitan Shnerb, who ran a charity that handed out clothes and food to the poor, had enough time to kiss Rina on the forehead, before she died. 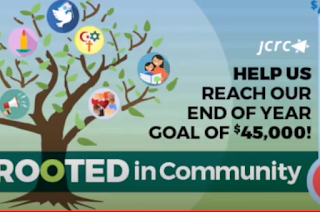 “I will say of the LORD, who is my refuge and my fortress, my God, in whom I trust,” the Rabbi at her gravesite chanted the words of Psalm 91. “Only with thine eyes shalt thou behold, and see the recompense of the wicked.”

Abdel Razeq Farraj, who was indicted for authorizing the attack, had been named as a career PFLP terrorist who had served 6 years in prison and had been arrested six times. The year that Rina was murdered, Farraj took part in an Adalah youth event in partnership with a PFLP affiliate.

Adalah is one of the anti-Israel hate groups funded by the New Israel Fund (NIF).

According to an NGO Monitor report, the NIF has directed $720,481 to Adalah. George Soros’ Open Society Foundation, who has also funded J Street, is another major donor.

Last fall, Beth Badik, a J Street supporter who serves on the regional committee for the anti-Israel NIF, and Barbara Penzner, a Reconstructionist cleric who had signed a J Street petition opposing a ban on BDS and another calling for engagement with a terrorist government, demanded that the Jewish Community Relations Council of Boston kick out the ZOA.

The Zionist Organization of America is the country’s leading pro-Israel group so Badik and Penzner’s animosity toward it and to Morton Klein, its unapologetically pro-Israel leader, was understandable. The anti-Israel Left had spent generations trying to seize control of the organizational establishment of the Jewish community in order to cut off support to Israel.

And they didn’t have far to go.

Badik, who is a supporter of one anti-Israel group and affiliated with another, also sits on the JCRC of Boston’s Israel & Global Jewry Committee.

What was bizarre was the accusation in Badik and Penzner’s op-ed, “We’re Calling for ZOA to Be Kicked out of Boston’s JCRC”, the petition backed by J Street, the NIF, and a number of other anti-Israel groups, and the JCRC’s final response affirming the bizarre accusation that Morton Klein, the son of Holocaust survivors, was supporting white supremacists.

Not only had the Boston JCRC and Jewish organizations failed to condemn the BLM riots which had vandalized synagogues and assaulted Jews, especially in the Fairfax Pogrom in Los Angeles, but they had decided to treat criticism of the black supremacist hate group as racist.

If the Boston JCRC had any standards, it’s the anti-Israel organizations calling for ZOA’s removal which should have been condemned and kicked out of any Jewish community alliance.

While the anti-Israel groups were attacking the ZOA for opposing BLM, neither they nor the Boston JCRC seemed particularly interested in actually defending Jews against antisemitism.

The anti-ZOA petition was obsessed with social justice, election integrity, and the other shibboleths of a leftist establishment that is incapable of actually talking about Jewish issues as an end, not a means.

J Street, which was behind the petition, had defended Rep. Ilhan Omar, even as ZOA and Klein had condemned her antisemitic tweets. Just as J Street has called for making a deal with Hamas. The J Street campaign to oust the ZOA attacked it for condemning George Soros while neglecting to mention that Soros had been a major funder of the anti-Israel organization.

If JCRC Boston and J Street consider Klein’s statements provocative, what of Soros’ belief that the “resurgence of anti-Semitism in Europe” is caused by Israel and that the “attitudes toward the Jewish community are influenced by the pro-Israel lobby’s success in suppressing divergent views.” What are these except typical antisemitic tropes and defenses of antisemitism?

Has J Street ever been asked to condemn these statements by its own backer?

And if “rhetoric that has been associated with antisemitic tropes” is a cause for expulsion, then how can the Boston JCRC justify letting any Soros-funded group remain in its umbrella group?

And it gets worse.

The Boston Workmen’s Circle, one of the groups petitioning to kick the ZOA out, proudly notes in its own literature that members of the Workmen’s Circle included Communists and that “The first member expelled from the Workmen’s Circle was kicked out in 1901 for working on behalf of the Republican Party.” A member of the group recently wrote an angry open letter to Chelsea Clinton celebrating the fact that one of her heroines was a Marxist and a Communist.

Even though the Communists killed countless Jews and ethnically cleansed the Jewish communities under their rule, forcibly closing synagogues, imprisoning and killing Rabbis, and banning the entire Hebrew language, that doesn’t get you condemned by the JCRC.

Rothchild is a radical anti-Israel activist who is a member of the anti-Israel JVP BDS hate group that was considered too extreme even for the Boston JCRC.

Rothchild has described herself as a “self-hating Jew”, falsely claimed that “the anti-Semitism and anti-Zionism that can now be found in Muslim countries began almost entirely with the founding of the State of Israel”, and posted on an antisemitic site that, “If I believed in a wrathful God, I might wonder why the Jewish National Fund forests were burning?”

“Hamas has produced horrific suicide bombers and incredible social service agencies building schools and hospitals and caring for the forgotten population. Hamas grew out of a response to Israeli oppression during the First Intifada,” Rothchild was quoted as saying.

According to the JCRC, uplifting the voices of the worst sorts of deranged antisemitism from the Left isn’t a problem, but Morton Klein condemning BLM, Soros, and other Jewhaters is a crisis.

The Badik and Penzner op-ed argued that failing to kick out the ZOA would “convey an astonishing lack of empathy, decency and basic compassion, for people of color, for immigrants and Muslims”. The only astonishing thing here is the utter lack of interest in Jewish interests by leftist activists who claim to be Jewish and even more falsely to speak on behalf of Jews.

Where is their basic compassion, their empathy and decency toward the Jewish synagogues and small businesses hatefully assaulted by Black Lives Matter rioters, and for the Jews of Israel living under the shadow of Islamic terrorism?

The New Israel Fund, in which Badik plays a role, and which is one of the leftist groups that demanded the expulsion of the ZOA, has funded BDS organizations and groups linked to terrorism. The lack of basic compassion, empathy, and decency that is required to be a member of the New Israel Fund is astonishing. As is the disinterest from the Boston JCRC.

Criticizing Black Lives Matter is unforgivable no matter how many synagogues they trash, but Jewish lives are worthless to organizations with ‘Jewish’ in their names, but not their hearts.