Share
Facebook Twitter Pinterest Reddit Share via Email Print
A few years ago, CAA announced that it had signed on to represent Patrisse Cullors. The powerful Hollywood talent agency is considered the biggest firm of its kind and doesn’t usually represent activists. But the Black Lives Matter co-founder isn’t a typical activist either.

By the time that Cullors was being represented by the talent agency, the self-proclaimed “trained Marxist” was going from award dinners to studio events. Most speaking fees aren’t made public, but last year, Cullors, along with the other two co-founders of the racist BLM hate group, charged the University of Florida $10,000 each to address students online. 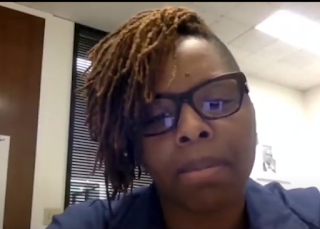 When she isn’t charging thousands to video chat, Cullors curated ComplexCon, a BLM global art show, and worked on an ad campaign for Adidas with Pharell Williams, claims to be a “dancer, choreographer, designer, stylist, producer, and director.”

Cullors got to consult for Good Trouble, a lefty Disney TV series, about two girls, one white and one Latino, who move to Los Angeles and fight racial injustice. Another way of saying that is, she gave a show run by a white lady who used to act on The Bold and the Beautiful street cred.

“You only have to spend about five minutes with Patrisse to be blown away by her as an activist, artist, intellectual and force of life energy, love, joy and humanity,” Good Trouble showrunner Joanna Johnson raved. “She has such a wealth of knowledge and life experience. I’m always looking for that in writers because truth is not only stranger but more nuanced and rich than fiction can ever be.”

Truth is indeed stranger than fiction. Just ask the Black Lives Matter founder who went from a year in which the hate group’s race rioters burned buildings and terrorized communities to buying a $1.4 million home in the mostly white Topanga Canyon through a corporate entity.

Like every proper trained Marxist should. As an amateur Marxist, Cullors had to settle for the San Fernando Valley, but as a fully trained Marxist she got “vaulted ceilings clad in knotty pine” and “whitewashed hearth fireplaces.”

Whiteness and whitewashing isn’t all bad. Especially when white studios are paying for it.

The Topanga Canyon home has “soaring ceilings”, “skylights”, and is ideal for “quietly contemplating cross-canyon vistas framed by mature trees” or the next town your hate group is going to burn. There’s even an art studio and politically incorrect “maids quarters”.

The house is down the road from one of the homes involved in the Manson murders which seems only appropriate since Manson wanted to start a race war.

And Black Lives Matter is carrying on Manson’s work.

This was reportedly Cullors’ fourth home purchase after buying a ranch on three acres in Atlanta with a private airplane hangar and shopping around for a luxury home in the Bahamas.

Cullors also has her own anti-police organization, Dignity and Power Now, run by Lamia Al-Sadek, the former county director of Islamic Relief Worldwide, and two white people, near USC. And she also has her own consulting firm with her lover, Janaya And Patrisse Consulting.

It’s unclear if either of these were the entities that Cullors used to buy her $1.4 million home, or if she has other organizations in her portfolio that have yet to be exposed and revealed.

While Cullors went with CAA, Alicia Garza, the second BLM co-founder, went with ICM, and her book, Purpose Of Power, came out last year. Garza is also due to appear in the HBO adaptation of Ta-Nehisi Coates’ racist rant, Between the World and Me.

ICM’s previous coup was boasting about the role of “client Josh Hartnett” in the HBO “documentary” Exterminate All the Brutes which “shifts perspectives by highlighting America’s founding as inherently genocidal”. It’s no wonder that the entire roster of BLM’s founders have found a comfortable home in an entertainment industry that hates America as much as they do.

You can read about all this in Opal’s official press releases, in between telling a newspaper, “I do this because we deserve to live.”

And deserve to live very well too.

WME used Opal Tometi to launch its Social Justice Now Film Festival through Film Life Foundation, a non-profit founded by Opal and Marvel star, Michael B. Jordan. Sponsored by Sony, Amazon, Heineken, J.P. Morgan, and other great outposts of social justice, the festival’s message is “translate art into change” and features movies like, Who Will Survive America.

It’s hard surviving America while being sponsored by a Japanese electronics firm, a Dutch beer conglomerate, and a banking firm whose predecessors had used slaves as collateral.

Opal also has her own production company, Blue Opal Productions.

Unlike Cullors and Garza, both of whom came out of Los Angeles, Opal came from Arizona, but Hollywood is the common denominator of the founders of Black Lives Matter.

The founders of BLM have gone to work acting, writing, consulting, and promoting for Hollywood because their racist hate movement was always an entertainment industry production. BLM’s race riots destroyed communities and small businesses, but its brands and buzzwords were a corporate marketing campaign backed by industry talent. Like Orson Welles’ War of the Worlds radio broadcast, it was a production, even if the physical destruction of the riots was all too real.

Why shouldn’t Cullors get a house in the area where Quentin Tarantino filmed a scene in Once Upon a Time in Hollywood and where movie stars house their pets at the Topanga Pet Resort?

It’s all made in Hollywood anyway.

Truth is stranger than fiction. But Hollywood also specializes in turning fiction into truth. Why not set the country on fire, elect some Democrats, and get some new content in the pipeline?

Hollywood had been stagnating. Every piece of IP or intellectual property had been locked down by giants like Disney, and the staggering cost of Silicon Valley streamers like Netflix and Amazon Prime sinking billions into developing original content to keep subscription viewers on their plantation had made it impossible for much of the old industry to compete on its own turf.

Now there are books to adapt into movies, TV series to launch, and countless entertainment industry products to sell to guilty liberal suburban moms who joyfully grapple with the depths of their own racism by binge watching black pain. And there are the BLM co-founders to help Hollywood get all the political cred that it needs to make a killing out of racism on a budget.

The damage from the BLM race riots surpassed $2 billion. That sounds like a lot of money, and individually it wiped out countless businesses, crushed neighborhoods and communities, and took more lives and dreams than will ever be accounted for, but that’s nothing compared to the $17 billion that Netflix blew on programming in just one year. And the best part is that $2 billion was entirely paid for by ordinary Americans, insurance companies, and non-industry types.

Think of the Kenosha riots as the Atlanta burning scene in Gone With the Wind. But no Hollywood studio had to sacrifice its own sets to produce all that footage. Race rioters were happy to burn down American cities as publicity for Hollywood social justice projects.

Some consulting and acting gigs for the marketable founders of the racist hate group is a small price to pay for Warner Brothers to use HBO Max to compete with Netflix. It’s been a long time since Warner Brothers meant the conservative Warner brothers, Jewish immigrants and Republicans who appeared before HUAC, and declared, “We are willing to establish such a fund to ship to Russia the people who don’t like our American system of government.”

Warner Brothers and HBO Max, like CNN, are cultural death rays of the AT&T death star. Or, as a CNN reporter described the riots, “fiery, but mostly peaceful” death rays.

If only there were a fund to ship AT&T, Netflix, and Disney to Russia.

After BLM fades, there will be new productions, spectacles, and extravaganzas to excite, humiliate, and distract the attention of Americans from the havoc being wreaked on their country as a handful of entangled companies fight for supreme dominance in the oligarchy.

And BLM’s co-founders have found a good exit strategy with production companies, organizations, and homes in an industry that knows the value of a good show.

Somewhere, Captain David Dorn’s widow is mourning her husband. And the other victims of BLM are immersed in their own private griefs for lost children, spouses, and parents.

But in Hollywood, the mansions only get bigger and the party never ends.