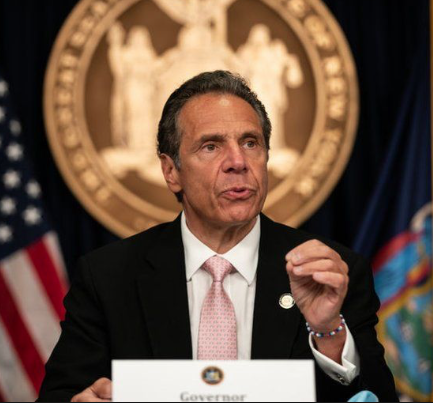 In 1077, Holy Roman Emperor Henry IV, repenting for his conflicts with the church, stood barefoot in the snow for three days begging the forgiveness of Pope Gregory VII.

It wasn’t the last time a politician apologized, but Henry stands out for his humility and sincerity — two things that seem missing on the rare occasions politicians today offer an apology.

Andrew Cuomo’s recent spate of “sort-of-kind-of-apologies” illustrate in high relief the types of political apologies we now accept as normative.

Cuomo’s first pseudo-apology came after revelations that he and his administration lied about the number of nursing home deaths in New York due to Covid.  When asked if he wanted to apologize for his policy of forcing nursing homes to accept potential Covid patients, he declined. Instead, he said he was sorry that he’d created a “void” of accurate information and gave his political opponents an opening.

We’re in a very bad place if the public accepts that thousands died without so much as a “regret” from the man in charge, but accepts his apology for a lacking press operation.

Only days later, embroiled in a new scandal involving sexual harassment, Cuomo offered a “sort-of-apology” when he said he felt bad that some women had “misunderstood” his intent.

What I’ve noticed is that when Democrats apologize, they do so mostly for being misunderstood or un-appreciated.

Former Democrat Congressman Earl Pomeroy of North Dakota, suffering severe political drag in his re-election due to his association with Speaker Nancy Pelosi, apologized on TV. He made clear, “I’m not Nancy Pelosi.” He then said he was sorry that some voters were disappointed over a “vote here or there.” He seemed to be apologizing for the unenlightened North Dakotans he represented and their shared disdain for his record.

When Republicans apologize, on the other hand, they tend toward playing off their misdeeds as mistakes from which they intend to learn.

When it was reported that former Republican Congressman Tom Feeney of Florida had gone on a distant golf vacation courtesy of a corrupt lobbyist, Feeney acknowledged his “rookie” mistake and promised he’d do better.

Though Republicans seem to take greater responsibility, the evidence whether they’re any more sincere isn’t clear.

Todd Akin, the near sure-fire winner of the MO Senate election in 2012, lost that race because he claimed women seldom got pregnant due to “legitimate rape.” He acknowledged it was his words that were wrong and not just the inability of listeners to discern what he meant. Still, he got creamed in the election 54.7% to 39.2%. After the shellacking, Akin retracted his apology and defended his original comments in a book published in 2014.

Most political apologies seem to involve blaming others.

The next day, Schumer first denied he’d made the threat, then he blamed his being a Brooklyn pol for his strong language. Eventually, he admitted he “should not have used the words I used yesterday.” Then he undid his “sort-of-apology” excusing himself by claiming he was the victim of outrage manufactured by Republicans. Manufacturing outrage is something Schumer knows more than a little about.

One can’t imagine Trump offering even a Schumer-style non-apology. Regret, real or feigned, isn’t part of Trump’s DNA. At least you don’t have to worry whether he’s a phony.

Like Trump, most politicians seem to think a sincere apology denotes weakness and will rebound against them at the polls.

When he was running for VP with Eisenhower and the top of the ticket, Richard Nixon not only didn’t apologize for accusations he’d benefited personally from $18,000 in contributions, he turned the tables on his opponents. In his famous “Checkers Speech,” Nixon compared his wife’s “cloth coat” to the minks donned by wealthy elites. He suggested the rich and privileged Democrat presidential candidate was persecuting a man of “modest” means. Until then, it was common for politicians to ignore attacks by their opponents. Nixon changed that. A few weeks after his Checkers speech, “Ike” and Nixon were elected overwhelmingly.

A decade later, as president, Nixon again refused to apologize during Watergate when he famously insisted,“I am not a crook.” It didn’t work out as well this time, and he was forced to resign in disgrace. 5 years hence, Nixon admitted to journalist David Frost he’d “let the American people down.” From what I can tell, It was as close to an apology as Nixon would ever make.

Bill Clinton was famous for apologizing and did so frequently, but almost never for his own misdeeds. In 1994, speaking of the genocide in Rwanda, he expressed sorrow that the international community “did not react quickly enough after the killing began.” In 1999, he apologized for NATO’s bombing the Chinese embassy in Belgrade.

Clinton apologized to 7 heroic, but undecorated, African American WWII soldiers in 1996. A year later, he apologized for the 48 year old Tuskegee Syphilis study by the U.S. Public Health Service that withheld medical treatment

What Clinton did not do was apologize for his deceit concerning Monica Lewinsky. Instead, he eventually expressed “regret” for “misleading people”. He remains silent about the more than one dozen other women who have accused him of harassment, victimization, and assault. Instead, they have been publicly attacked by him, his wife, and a complicit media.

Like Clinton, most politicians don’t have a hard time saying they’re sorry so long as their apology is offered on behalf of someone else’s misdeeds. In 1997, a Chicago City Council Committee passed a resolution formally apologizing to Catherine O’Leary and her cow for the unjust blame they’d received for starting the great fire of 1871.

In 1977, 30 plus years after the fact, President Gerald Ford apologized for the unconstitutional and despicable treatment of Japanese Americans interned in camps during WWII, officially revoking Franklyn Roosevelt’s “exclusion order.”

In 1988, Ronald Reagan signed the Civil Liberties Act again apologizing to Japanese Americans and providing each of the 60,000 internees still alive with a cash settlement of $20,000.

Ronald Reagan was unique though in that his apologies were not confined to expressing regret over the blemishes of former administrations or proclaiming sorrow that others had not understood him. President Reagan not only expressed regret over Iran-Contra in 1987, he admitted “serious mistakes were made,” and he accepted responsibility saying they were made “on my watch.”

The prize for most flagrant apologizer-and-chief has to go to Barack Obama. He conducted a multi-continent, worldwide, confession tour apologizing to anyone who would listen for what he saw as the sins of America and his predecessors. The closest he came to apologizing for his own misdeeds was expressing regret that people lost their healthcare insurance after Obamacare saying, “we weren’t as clear as we needed to be.” It’s as though he didn’t even remember repeatedly promising, “if you like your health care plan, you can keep your health care plan.”

Elton John asked “what (do) I got to do to make you love me?” His song implies the route to redemption starts with a sincere sense of sorrow, but then concludes “sorry seems to be the hardest word.”

He could have been talking about politicians.