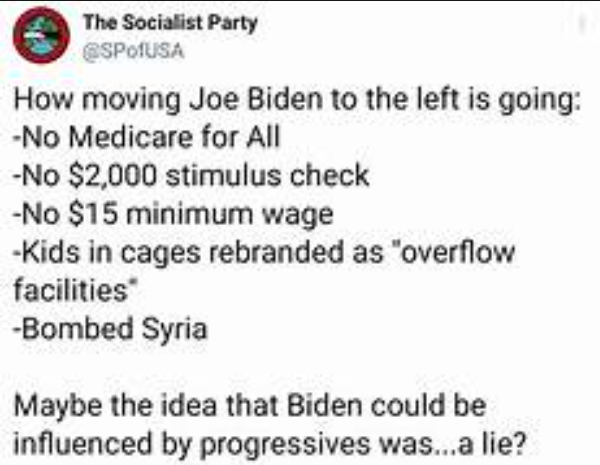 Progressives are irate that the $15 minimum wage was removed from the $1.9 billion Covid relief bill before being passed in the U.S. Senate. They’ve pledged to make the passage of that wage hike their number one priority in the coming year.

A coalition of conservative Republicans and liberal Democrats removed the minimum wage increase because they know the consequence a wage hike would cause hundreds of thousands of mostly young people t lose their jobs – especially young blacks and Hispanics.

Why then are leftist progressives so angry? It’s not like they don’t understand the horrendous toll a minimum wage increase would take on poor kids. Even progressive economists acknowledge that fact. The Democrat controlled Congressional Budget Office reported that the new minimum wage hike would cost 1.4 million jobs — mostly among the young and unskilled.

Those who don’t make it on the first rung of the economic ladder when they’re young aren’t likely to climb that ladder as they get older. That’s even more true for those who progressives claim to care most about — the disadvantaged who can’t afford college or vocational school and may never gain the skills they need without work.

Why would progressives knowingly consign a group of Americans to potentially permanent joblessness?

Jordan Peterson suggests that to discern the motives of those who do what seems to the rest of us as insane or stupid things, consider the results of their actions.

Because it seems both insane and stupid, Peterson points to the final days of the Nazi holocaust as an example. Why would the Nazis continue to expend resources on killing Jews when the allies were closing in and those resources could have been used to protect the German people? Peterson suggests that within his own twisted and evil desires, Hitler’s decision to eliminate the Jews he hated rather than protect the German people he blamed for betraying him was actually a rational choice.

Today’s progressives are not Nazis killing those with whom they disagree, but the question remains: why create a class of people who can’t get work? And why do so especially among those who will least be able to ever overcome that barrier, and maybe never get work?

Perhaps the answer is as simple as that’s exactly the result they intend.

How does the party of big government problem-solving solve their number one problem when it is gaining and holding political power? It’s unlikely people will willingly opt for leftist progressive policies while they are thriving in free economic structures that maximize their options and opportunities and show their dreams are within reach.

To foil that kind of hope and prosperity, progressives must create immense misery and hopelessness; then they have to supply an adequate subsidy to make the entrapped grateful enough to willingly exchange their vote for that handout.

Of course, a minimum wage increase that costs only 1.4 million jobs by itself won’t provide them the majority coalition progressives need. It will take policies that cost far more jobs to do that. And then entitlements that build absolute dependency.

Their coalition-building efforts are well underway with the 10% of Americans who receive welfare, the 20 to 30 million illegal immigrants to whom Democrats propose giving the franchise, the Medicare-for-all proposal that shackles a majority of us to government healthcare, and the 20% of Americans already on a local, state, or federal payroll. And that doesn’t count those who receive social security checks, veteran’s benefits, or a public employee pensions.

Add to all that the fact of millions more Americans out of work as Covid has given progressives entree to crush the economy with massive increases in the federal debt load, business lockdowns, and regulatory over-reach. The next steps will be to repeal the Trump tax cuts, add additional regulations on job creators, decimate our energy sector with Green New Deal initiatives, and promote Davos’ Great Reset.

That done, they won’t have to beg Americans to accept the Universal Basic Income, most will be glad for it. We see the outline of entitlements in the Covid relief bill with it’s cobweb of direct payments, tax credits, and loan forgiveness. Expect they’ll soon insist those entitlements be made permanent.

It’s not hard to see how progressives calculate they will create a permanent bloc of Democrat voters big enough to guarantee they never lose another election.

America is already up to its neck in problems. The economy stunting federal debt, Covid shutdowns, the assault against free speech, the poisonous indoctrination being injected into our education systems, and the toxic identity politics that is burning through our nation’s unity and values.

But solving those problems would only set back progressive hopes. It’s testament to the corrupting power of their ambition that they win only by using government to create the misery they then claim only more government can relieve.

In the process they must deny freedom, hope, and economic well being to a huge number of Americans, especially those most vulnerable to their economic machinations, the poor and disadvantaged – those they claim to care most about.

Green Energy Fraud And Deceit With Politicians Cashing In