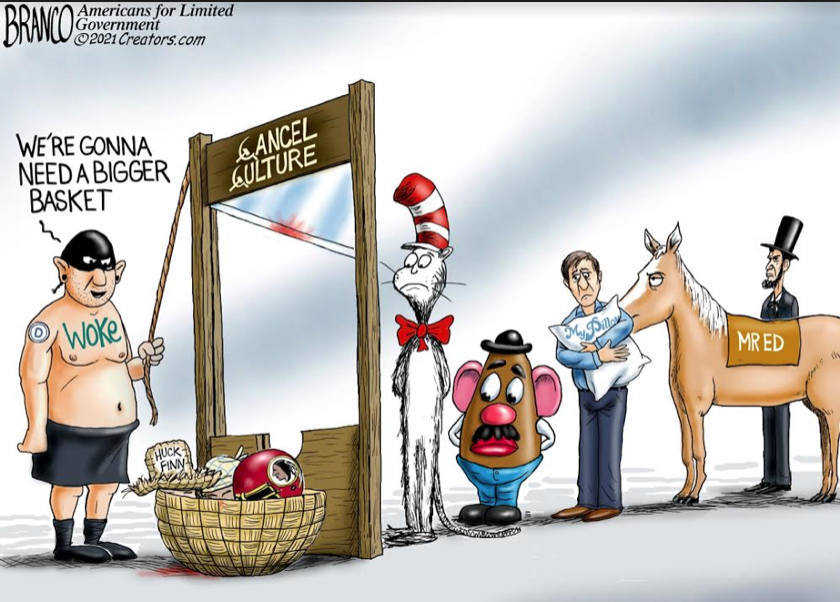 C’mon ev’rybody, I say now let’s play a game
I betcha I can make a rhyme out of everybody’s name
The first letter of the name
I treat it like it wasn’t there
The Name Game, – Shirley Ellis/Lincoln Chase

My Mother never tolerated the false. She believed that there should be no hyphenated Americans. We both agreed that the use of hyphenated cultural origin or racial descriptions was a patently ridiculous process. We are Americans.  Some of us journeyed from other countries to be free and to live the American dream.

Mom felt that the destruction of historical monuments, statues, flags and other historical artifacts was, at best, ridiculous.  It accomplished nothing.  Destruction of such items does not change history. My Mom’s wise counsel is cherished and greatly missed.

I wrote about the aforementioned destruction of history in the June 2020 Politichicks Article,”The Devil of Our Divisions.” The destruction of history to erase history is a delusion. Technically, as I wrote about in the June article, this process is called Historical Negationism. Negationism does not change history.  In our present day, it is merely a form of uninformed anarchy.

Now there is a movement among the political and liberal left to neutralize our language, our popular and cultural history. I find some of the following examples of language neutralization and cancel culture to be the pathway to the next profound belly laugh.

In recent months there have been popular culture figures diminished by the Woke and Cancel Culture. Dr Seuss and Mr. Potato Head have been recently targeted. Laughably, characters in some of the Dr Seuss books have been deemed racist. In fact, six books of the Dr Seuss catalog, such as “If I Ran the Zoo,” will not be published anymore because, as stated by the Seuss estate, they “portray people in ways that are hurtful and wrong.”

The Cancel Culture is trying to take Dr Seuss back to the 1920’s. This is when Theodore Seuss Geisel allegedly published racist and anti-Semitic cartoons while he was a student at Dartmouth. Perhaps the follies of youth or a liberal education? I do not find Dr Seuss children’s books to be racist. Continuing on this pathway of abject stupidity, this information was included in a study, published in 2019, entitled “Research On Diversity In Youth Literature.”

This study examined 50 books by Dr Seuss and determined that 43 out of 45 characters of color “have characteristics aligning with the definition of orientalism,” or the stereotypical offensive portrayal of Asia. The two “African” characters in the books analyzed both have anti-black characteristics.

The study further states that because the majority of the human characters in the Dr Seuss books are white. Therefore, they create a center of “whiteness” and promote white supremacy.

You can’t make this stuff up. These exercises in vapid academic senility are paid for with our tax or tuition dollars. One example of things that are wrong with our so-called higher education. What possessed St. Catherine University to lend their name to this exercise in futility is still not readily apparent to me.

In the interest of “gender neutrality” the toy manufacturer, Hasbro, has decided to remove Mr. Potato Head from our toy shelves.  This toy, that is over a half-a-century old, is now replaced with a toy with the gender neutral name, Potato Head.  Well, I have a few suggestions for new character names:  We now could have characters named O’Biden, Dr. Spud, and Idaho.

Even the Muppets are under fire. The Muppets, which originally ran from 1976 to 1981, has had a disclaimer slapped on to classic episodes of warmth and humor. This is in preparation for the Muppets debut on the Disney Network. Disney’s disclaimer reads as follows:

“This program includes negative depictions and/or mistreatment of people or cultures. These stereotypes were wrong then and are wrong now.”

This is political correctness to the point of the absurd.  When did we become such insipid wimps as a people? Perhaps, the grumpy old men in the balcony bear some resemblance to the current faux-resident of the Oval Office and may be offensive to that resident?

In even more recent days, the Woke mob has targeted the cartoon character, Pepé Le Pew, the Looney Tunes Skunk. Conservative Writer, Natalie Argyle, in a March 7th Chicks On the Right article, wrote in part the following humorous anecdote about Pepé amongst discussions of cartoon character correctness :

What is now happening is a push to create a generic culture for America. So that we now avoid any cultural description of our variances or experiences as a people. Liberals are a joyless people. Always looking around for something that offends them. Even dark swamp creatures, like Ex-CIA Director John Brennan, have gotten into the fray. Brennan stated, on March 1 on MSNBC, that he is “increasingly embarrassed to be a white man.”

I think that members of the liberal left, Democrat leadership and redundant RINOs should be increasingly embarrassed by their ignorant, dark, and cancerous cancel culture.

They are trying to destroy the America we love. The Cancel Culture folks are experts at rebranding. They have successfully rebranded communism as climate change.

They want us to become efficient spiritless machines. Not for me and not on my watch. Political correctness is one movement short of an active thought. I remain a critical thinker. It doesn’t take a Neanderthal to figure out this is all nonsense.

Green Energy Fraud And Deceit With Politicians Cashing In

Barry Shaw: The Israeli Election, Latest Polling and What it Portends