In just one week, the Washington Post churned out two op-eds on the same theme, “The GOP is Now Just the Party of White Grievance” and “The Republican Party is Making Jim Crow Segregationists Proud”. The D.C. Democrat paper doesn’t bother clarifying why Democrats from two generations ago would be thrilled that 1 in 5 black men voted for President Trump.

Ever since the election, the media has been beating its narrative drum with one message.

CNN howls that Republicans are the worst racists. The New York Times insists they’re even more racist than that. And MSNBC will counter that only white racists would vote Republican. 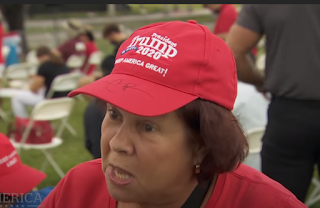 The most famous media exponent of the “white grievance” line is Stuart Stevens: Romney’s senior strategist, who went on to join the Lincoln Project. Stevens claimed on MSNBC that the GOP, “went down a path to embrace white grievance as its core” and that, “of the Americans who are 15 years and under, the majority are nonwhite. They’re gonna be nonwhite when they turn 18 and start voting and that’s the end of the Republican party as we know it.”

But David Shor, Obama’s battleground state election analyst, pointed out, “I don’t think a lot of people expected Donald Trump’s GOP to have a much more diverse support base than Mitt Romney’s did in 2012. But that’s what happened.

President Trump had done better than Romney with both black and Latino voters the first time around. And he improved on those numbers the second time around. As Shor notes, among Democrats, “Hispanic support dropped by 8 to 9 percent” and “there’s evidence that there was something like a 5 percent decline in Asian American support for Democrats.”

The Jim Crow segregationists must be really proud of that one.

As Henry Olsen, the author of The Working Class Republican noted, “Every seat Republicans have flipped from blue to red has been captured by a woman or a minority.”

These are strange numbers for the party of “white grievance”.

The Democrats and their media keep shouting that Republicans are becoming whiter even as Republican voters and elected officials are more diverse than they have been in a generation.

If any party out there is getting whiter, it’s the Democrats. And that has them worried.

These are some of the numbers that explain why Democrats are doubling down on accusations of Republican racism. These smears don’t reflect the real world, they’re a messaging operation by a radical party that bet its future on minority voters only to discover it’s losing its grip on them.

Democrat efforts to connect with minority voters backfired. As Shor noted, police defunding led to “conservative Hispanic voters who’d been voting for us despite their ideological inclinations” to begin “voting more like conservative whites”. And trying to win over Hispanic voters with open borders was an even bigger disaster. “Asking voters whether they lean toward Biden and Trump, and then emphasizing the Democratic position on immigration, often caused Biden’s share of support among Latino respondents to decline.” So much for immigration pandering.

Police defunding and open borders are only popular with AOC’s base of white hipsters.

Unable to meaningfully connect with minority voters, Democrats have defaulted back to accusing Republicans of racism. And insisting, all evidence to the contrary, that they’re a white party. It’s not only a lie, but it shows the level of desperation and contempt by the Democrats.

The Democrats have defined white grievance as opposition to critical race theory and their culture war. But neither are especially popular with minority voters. Going to war against Dr. Seuss may thrill the hearts of AOC’s white hipster base, but black and Hispanic parents want the Democrats to stand up to the teachers’ unions and reopen schools. San Francisco’s obsession with renaming closed schools even led to a rebuke from its black female mayor.

The Democrat culture war is based around generating racially polarizing moments, but they have nothing to do with the real concerns of most minority voters. They’re the noise of a college-educated lefty elite, white, black, and otherwise, talking about its ideological obsessions.

Eliminating Dr. Seuss doesn’t frame Republicans as the party of white grievance or racism. Instead it shows that the Democrats are unserious radicals who don’t intend to do anything for minority voters, and can’t even prioritize delivering the financial benefits that they promised.

But, much like Robin DiAngelo’s racist tract, White Fragility, when the Washington Post serially accuses Republicans of being white racists, it isn’t talking to minorities. The Post has fairly few minority readers, despite claiming to cover a city that is majority black. But that’s not the city that the paper is built to cover. The Post is a government paper and its demographic are officials, elected and unelected, and the swamp of contractors, consultants, and lobbyists around them.

The strategy is less about winning over minority voters than making white college-educated voters feel like racists if they even think about voting Republican.

Critical race theory and cancel culture are the barbed wire on the plantation for white voters.

Democrats kept black voters in by telling them that Republicans are racists. Now just as minority voters are beginning to drift over the invisible fence, the Democrats are telling college-educated white voters that Republicans are racist. Racism is the plantation’s fence. Minority voters on the plantation had been taught to fear racism outside the invisible fence while college-educated white voters are being taught to fear the hidden racism lurking deep in their own whiteness.

But the fear strategy, fear of the outside world and fear of your own dark side, has its limits.

The Democrats have gone from the party of, “The only thing we have to fear, is fear itself” to the party of, “Fear thy neighbor” and worse still, “Fear thyself.” The party’s pitch has been distilled into fear and hatred. As more minorities vote Republican, the Democrats can only respond by ramping up the racism smears that have become their only real argument for the minority vote.

The more minorities vote Republican, the more the Democrat racism smears fly in the media.

After 9/11, Bush Let the Al-Issa Family Into America. Now 10 Americans Are Dead