“Texas thought it could go it alone,” Senator Schumer declared on the Lower East Side. “Now Texas is paying the price. I hope they learned a lesson.”

But Democrats never learn their lesson. And they’re never expected to learn. 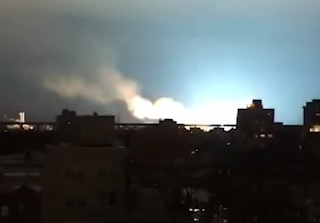 In 2003, New York City’s power went out because of a mistake by an operator in Ohio as part of the second biggest blackout in history which took down the grid in eight states and in Canada.

Texas’ decision to go it alone was a whole lot smarter than tying the fates of eight states and two countries to a control room in Akron. An interstate power grid means that a problem in a whole other state or country that you have no control over can leave you in the dark.

What was Schumer’s response to the 2003 blackout? He blamed President Bush for a “free market” approach of “allowing the states and utility industry to deal with it by themselves”.

Schumer and the Democrats extracted somewhere in the neighborhood of $100 million to further integrate the power grid across a quarter of the country and parts of Canada.

In 2012, Hurricane Sandy hit taking out power, leaving hospitals and residents in the dark. The East River power substation’s underground equipment was flooded by a “wall of water”, and the explosion that took out power across a large part of Manhattan could be seen for miles.

The station is located in the Lower East Side: the location of Schumer’s smug taunt to Texas.

You might imagine that after all that, Schumer’s home city and state would have moved the power substation away from the river. And you clearly don’t know New York City.

Instead, $1 billion was invested in a “storm hardening program”. The goal of the program was to make sure that the underground substation located right by the river in an area that regularly experiences hurricanes won’t be flooded because it will now meet current storm surge predictions. The substation was already built to withstand a predicted storm surge of 12.5 feet. Hurricane Sandy’s storm surge hit 14 feet. If another hurricane beats the predictions, then Manhattan will be in the dark again because of an underground power substation by the river.

But, it’s Texas that isn’t “learning its lesson”.

“When I wrote the Sandy bill, $60 billion for New York, we made sure everything was resilient,” Schumer claimed.

How resilient is it?

New York City politicians and media taunting Texas over power failures from the blackout capital of the country (at least the part of it not located in California) is a really poor decision. New York’s power grid goes down if someone sneezes or just looks at it the wrong way.

Last year, New York’s power failure left a quarter of a million in the dark.

Senator Schumer knows because he co-wrote a letter berating Con-Ed, and complaining, “we need to know why so many New Yorkers have been left in the dark, both literally and figuratively—a week after the storm—and get New Yorkers’ power back on ASAP.”

Schumer’s letter noted that, “people had been trapped inside of their homes with live downed wires for days.”

These letters are an annual tradition in which Schumer and other New York politicians blast Con-Ed, a relic of the corrupt Democrat Tammany Hall era, and then everything goes back to the way that it was before. Only the dumbest Democrat voters are fooled by the display.

Last year, Mayor de Blasio, who can’t even wake up on time, proposed a government takeover of Con-Ed. The Socialist never went through with it, but he would be welcome to try since Con-Ed was originally a network of companies controlled by Democrat officials which robbed the city on such a massive scale that its infrastructure was held back behind the rest of America.

All of these are part of the legacy that New Yorkers owe to Tammany Hall and the Democrats.

The bizarre corrupt shenanigans of the 19th century Democrat gas organizations continue to be a problem because every now and then an explosion happens, like the one that killed 8 people and toppled two buildings in Harlem, because there’s a 120-year-old infrastructure of gas pipes under New York City, leaking gas which functions like a ticking time bomb under the streets.

Con-Ed was formed out of the merger of these companies through a price-fixing agreement. And the occasional blackout, not to mention explosion, is part of the price New Yorkers pay.

The two years before that witnessed a blackout with an explosion so massive that it turned the sky blue and had Mayor Bill de Blasio’s spokesman denying that it was the work of aliens.

A year later, New York City celebrated the anniversary of the ’77 blackout which kept the city in the dark for days after a lightning storm and led to the worst rioting and looting in the city until the Black Lives Matter riots last year, with yet another blackout.

Blackouts are an annual tradition in the blackout capital of America and no lessons are ever learned. Meanwhile New Yorkers pay on average 35 to 40 percent more than the rest of the country. New York has the 8th most expensive electricity in the country while Texas has the 12th cheapest. And New York residential rates shot up 5 times faster than Texas in just the last year.

That might be defensible if New York City’s power service were at least reliable. It’s not.

Now that Texas suffered major power failures, New York City politicians and media feel entitled to sneer. For the moment, the tiniest moment, the city’s power appears to be in better shape.

Except for the power outages that came with the storm and took down power in Brooklyn.

It’s easy for New York special interests to take cheap shots at Texas because the media may experience blackouts, but it won’t blame New York Democrats for them except for political gain.

Governor Cuomo was praised by the media while the dead filled New York City nursing homes until the left flank of the Democrats decided that it had a shot at replacing him in the next election. And then, suddenly, the media began reporting on the scandal it had covered up.

The Democrats never have to learn any of the lessons from their latest disaster because the only reason the media will ever hold them accountable for any of them is for political gain.

Why bother doing a good job running anything if the only metric that matters is political?

Had Cuomo stayed to the left of AOC, but killed twice as many seniors, he would have been fine. Had President Trump stayed in the White House, Cuomo would have also been safe.

That’s why blackouts in New York and California go politically unpunished, but the media is blaming the Texas power failures on Senator Ted Cruz taking his family to Cancun.

When the snow is cleared away in Texas, New Yorkers will be getting ready for the city’s annual spring and summer blackouts. In ‘21, these will almost certainly be accompanied with riots. But no one in the media will sneer at New Yorkers or Californians huddling in the dark. Unlike sneering at Texans, there’s nothing to be politically gained from such a show of contempt.

New Yorkers won’t learn their lesson. Not even when it’s 120 years in the making.