“We have 11 million undocumented people living, working and raising families in our communities without legal status,” Senator Robert Menendez argued, introducing the Biden illegal alien amnesty bill that he had sponsored. “These are good and decent people.”

Menendez, who was tried for, among other things, allegedly taking bribes to help his millionaire Dominican donor obtain visas for his model ‘girlfriends’, knows a lot about immigration.

He also knows quite a bit about the goodness and decency of illegal aliens. 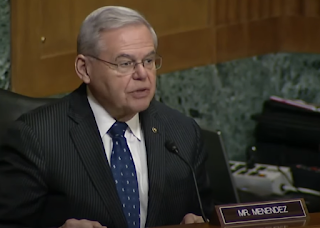 Menendez’s office was caught employing an illegal alien intern who was also a registered sex offender. The intern, Luis Abrahan Sanchez Zavaleta, had come from Peru on a tourist visa which had expired. Luis proved his goodness and decency by molesting an 8-year-old boy.

Luis had repeatedly sexually assaulted an 8-year-old boy. He was charged with “aggravated sexual assault” which under the state criminal code involves “an act of sexual penetration.” Since this was New Jersey, a state run by Democrats and the mob, the Menendez intern only received two years probation and was not turned over to ICE until after he tried to apply for Obama’s DACA illegal alien amnesty.

When ICE finally got wind of it and was ready to send the illegal alien child molester back to Peru, its New Jersey agents were told to stand down by the Obama officials running immigration in Washington D.C. because Menedez was up for reelection in two weeks and the Democrats wanted to avoid an arrest that risked “garnering significant congressional and media interest”

Obama officials denied everything and Senator Menendez borrowed Obama’s favorite line, claiming that he had only heard that his office had an illegal alien child molester from the news.

“It does speak volumes about why we need comprehensive immigration reform,” Senator Menendez had argued. “I can’t know who is here to pursue the American dream versus who is here to do it damage if I cannot get people to come forth out of the shadows.”

The shadows being those of his own office which failed to check the sex offender registry. We can deport illegal alien child molesters without offering amnesty to millions of illegals.

Now, Senator Menendez has introduced the illegal alien amnesty bill championed by the Biden administration which would provide amnesty for at least 11 million or as many as 22 million illegal aliens and ensure a rapid pathway to legal status for DACA applicants like Luis.

Menendez has always been passionate about immigration. He was so passionate about it that he ended up being indicted on 8 counts of bribery, for, among other things, helping a millionaire Dominican immigrant donor in his sixties get visas for his twenty-something model “girlfriends”.

According to the indictment, Senator Menedez got “access to an exclusive Dominican resort” and the “use of a Carribean villa”, not to mention $750,000 in cash to Democrats. Then there was a trip to Paris for Menendez with a “woman with whom he had a personal relationship”.

Senator Menendez also “used his position as a United States Senator” to “influence the visa proceedings” for his donor’s “foreign girlfriends”, according to the indictment. These girlfriends allegedly included Juliana Lopes Leite, an actress and model from Brazil, on whose behalf Menendez’s senior policy advisor told the State Department that he wanted to “advocate unconditionally” and “encourage careful consideration” of her visa application.

While she came to America on a student visa, Menendez met her as his donor’s girlfriend.

Then there was Rosiell Polanco Suero, a Dominican model, who, along with her sister, wanted to come to America. Menendez’s office sent an email to the Consul General in the Dominican Republic urging him to approve their visas. When their applications were turned down, Menendez applied the screws and the sisters got a call telling them to come in for a second hearing.

“Subj: Two people from the D.R. who wanted visas to visit Dr. Melgen got them. In my view this is only due to the fact that R.M. intervened,” read an email sent to Daniel O’Brien, Menendez’s chief of staff. O’Brien had formerly worked as the chief of staff for Senator Joe Biden.

Finally, there was Svitlana Buchyk, a Urkranian model and actress living in Spain on whose behalf Menendez wrote another letter.

“Certain elements of the FBI and of our state cannot stand, or even worse, accept that the Latino kid from Union City and Hudson County could grow up to be a United States senator and be honest,” the New Jersey senator declared, blaming his legal misfortunes on racism.

After spending over $5 million on his legal defense, Menendez’s trial ended in a hung jury and he’s now the public face of Biden’s amnesty push while lecturing us about the goodness and decency of illegal aliens. If we won’t agree, then like the FBI and the investigators who put him on trial, we’re also racists who hate a “Latino kid” who has spent 47 years “working” in politics.

It’s no wonder that Biden picked another member of the “47 Years in Politics” club to be the public face of his campaign to kill American jobs and eliminate any hope for the future.

Unlike the Latin American and Ukranian “models” eager to come to America and party with Senator Menendez’s donor three times their age, his illegal alien advocacy wouldn’t just harm the domestic prostitution industry, but would steal the jobs and dreams of millions of Americans.

It would also boost domestic crime and potentially enable child molesters like his former intern.

What does it say about the U.S. Citizenship Act of 2021, Biden’s illegal alien amnesty bill, that it was introduced by Senator Menendez, who had stood trial on bribery charges, and in the House by Rep. Linda Sanchez, whose husband had been indictedover the alleged theft of taxpayer funds?

“I am the daughter of immigrant parents from Mexico. They came to this country and they work hard and they sacrificed every day to provide for me and my brothers and sisters,” Rep. Linda Sanchez claimed. “Their story is like the story of so many others.”

Like so many others, Rep. Linda Sanchez, and her sister, Rep. Loretta Sanchez, who had run for office by telling her bigoted voters that, “the Vietnamese and the Republicans are… trying to take this seat”, built careers in politics. Linda, who represents a district in California, married the chair of the Connecticut Municipal Electric Energy Corporation who was lobbying her colleague.

Linda’s husband allegedly took $800,000 from CMEEC and spent it on trips to the Kentucky Derby and a flight for Linda to Key West, Florida. Sanchez claimed that her Kentucky Derby trip had been okayed by the House Ethics Committee. It’s a story like so many others.

It’s hard to think of two worse rotten hacks to be the public face for Biden’s illegal alien amnesty.

Biden’s illegal alien amnesty will sail through the House, but faces challenges in the Senate. Its champion there will be a politician who was tried for bribery involving abuse of the immigration system and whose child molesting illegal alien intern had been protected from ICE.

Senator Menendez is the perfect man for the job because he’s the epitome of abusing the immigration system. And somewhere in New Jersey are the parents of a boy abused by his intern, an illegal alien who should have been deported long before he could commit his crime.

How many more little boys will be abused by the beneficiaries of Biden’s illegal alien amnesty?

With Corrupt Politicians, "Sorry" Seems To Be The Hardest Word