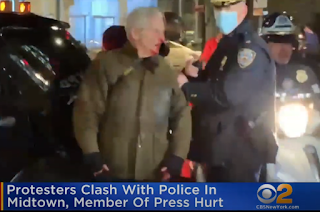 Even the most modest estimates of political woke terror in 2020 place it at 8 dead, over 700 injured, and over $2 billion in damages. And the year could have ended even more bloodily with the Left prepping for mass protests with “bail funds that could be activated in response to mass arrests” and a fund “for the families of anyone killed in violence on or around Election Day.”

Months before the election, 41% of Democrats suggested that there would be at least a little justification for violence if President Trump won. Those are numbers the media won’t discuss.

The Foundation for Individual Rights in Education (FIRE) free speech survey from 2020 found that the highest level of tolerance for political violence came from Columbia University students. Three-quarters of Columbia students identified themselves as some form of “liberal” while less than 10% would describe themselves as politically conservative.

Meanwhile at Yale, 1 in 5 students were willing to tolerate political violence under some circumstances. These are the future leaders of the country’s public and private institutions.

The college with the most conservative student body, Brigham Young, making up about half the students, also had a student body with the least tolerance for political violence.

The identified political demographic with the strongest support for violence was the Left.

The ‘wokes’ weren’t directly represented, but so-called non-binary gender students, an almost certain ‘tell’ of wokeness, were the most violent with 1 in 10 believing that violence was sometimes or always acceptable, and a third believing that political violence could be justified. Three-quarters of this group identified as some variety of liberal: the highest number.

The groups most likely to be left-wing were the likeliest to find political violence acceptable.

1 in 4 black students and students who identified as LGBTQIA found violence acceptable under some conditions while white and straight students were the least likely to support violence.

While these numbers are bad enough, the levels of support for political violence rose sharply as the election approached as can be seen from general surveys of the country.

Anecdotally it’s not surprising that the Ivy Leagues are more likely to incubate violence, and that the violence is most likely to come from the Left. Conservative groups like the David Horowitz Freedom Center which have been active on campuses were on the front lines of this violence.

But numbers like these provide hard data to back up the anecdotal stories and experiences.

They also aptly sum up the source of the violence in 2020. Some of the worst Black Lives Matter race riots were led by academics and used students as their organizers.

All of these numbers are familiar from previous lefty radical efforts going back generations. 39% of Occupy Wall Street protesters had graduate degrees. Wokeness is an academic disease.

2020’s racial violence, like the political violence of previous years, was an outgrowth of ‘woke’ campus radicalization. And ‘woke’ is just a euphemism for radicalization. To become ‘woke’ is to turn extreme and to see society as a brutal struggle for power between polar moral opposites.

It’s a cultish term for a political cult that reframes extremism as a revelation, and was used by the Nazis who made “Deutschland Erwache!” or “Germany Awake!” into their slogan.

But only 31% of Occupy Wall Street members who were surveyed had expressed support for political violence back then. What was once a shocking statistic appears positively moderate when 41% of Democrats had come to support Election Day violence a decade later.

“Treason doth never prosper: what’s the reason? Why, if it prosper, none dare call it treason,” an Elizabethan courtier had acidly observed.

Washington D.C. is now under permanently military occupation to stave off riots by the party of riots. The Democrat politicians who painted Black Lives Matter slogans on the street and called federal law enforcement fascists for trying to keep the ‘woke’ mob from burning down the White House and the Church of Presidents are very eager to use the military to suppress protests.

Even if these protests have yet to materialize after over a month of D.C.’s military occupation.

All of it is political theater meant to suppress the same sort of populist backlash to Democrat one-party rule in D.C. that originally built the Tea Party. Meanwhile the ‘wokes’ remain a ticking time bomb. While the average Democrat may no longer see the need to riot and burn, the ‘wokes’ are not about to go back to sleep just because Biden is sleeping in the White House.

The Democrat establishment’s support for violence may be opportunistic, but Ivy League campuses are radicalizing students to support violent revolution regardless of who is in office.

D.C. doesn’t need the National Guard, but Columbia University and Yale just might.

Greenfield: The Blackout Capital of America Sneers at Texas