In 2013, the Puffin Foundation issued a grant for what was described as a “Soviet Yiddish Songbook”. The CD, later issued as “City of the Future: Yiddish Songs from the Former Soviet Union”, is accurate only in that its songs, like Red Army and The Song of the Collective Farmer, are indeed in Yiddish. Otherwise they’re propaganda for a brutal antisemitic regime that killed countless Jews, including one of the men who wrote the song lyrics, and Yiddish culture. 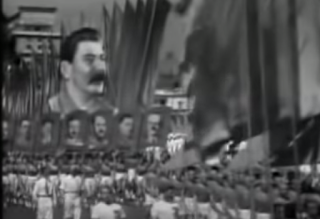 The CD was working off an album titled For Youth, meant to be used to indoctrinate Jewish students who had been forced to attend the Soviet Union’s Yiddish schools. The Yevsektsia or the Communist Party’s Jewish Section tasked with destroying Jewish life in the USSR had worked to ban Hebrew, Zionism, and Judaism, while treating Yiddish as a legitimate language.

The Communist Party eventually purged its Jewish collaborators and a secret Hebrew revival began to take off among Jewish youth in the USSR. Meanwhile, leftists in America tried to keep Soviet Yiddishism alive long after the Russian Jews it was meant to indoctrinate had rejected it.

The Puffin Foundation has a great deal of fondness for the USSR. It sponsored a screening of American Reds which is described as, “The Communist Party USA, despite its grievous faults and failings, and its willful blindness to the tyranny of the Soviet Union, still had a vision of a better world.”

There’s Red Father, the “story of a Communist lawyer, from fighting for civil rights in the U.S. and against fascism in Spain”, At Home in Utopia, which highlights co-ops “where many of the residents were Communists or sympathetic to the communist movement”, and Pete Seeger’s Legacy which, it emphasizes, includes “a sizable segment on Seeger’s communism”.

A theatrical production in Baltimore states, “Our great achievement in the production was discovering how we could make a show about capital “C” Communism and still have it feel like something Michael Bay or Disney might create.”

You don’t have to be Roy Cohn to spot the agenda here.

There was a show at the Museum of the City of New York, a frequent Puffin venue, celebrating the Communists of the Lincoln Brigade which featured a can belonging to Julius and Ethel Rosenberg better known as the Atom Bomb traitors.

“Did they?” The New York Times’ art critic asked skeptically. You know you’ve gone too far when it’s the Times that has to slam on the brakes by quoting Ronald Radosh and George Orwell.

Until recently, the Puffin Foundation, and its affinity for all things red, had, unlike its namesake bird, flown under the radar of most people. But then the Puffin Foundation decided to revive a Communist rag that had been boycotted for praising the rape and murder of Jews.

Jewish Currents, a spinoff of the old Communist Party’s Yiddish paper, the Morgen Freiheit, had been all but abandoned by the old lefties, until the Puffin Foundation decided to revive it. And most of the attention was garnered by Peter Beinart’s name splashed all over its hateful pages.

While most of the coverage has focused on Beinart’s use of Jewish Currents to continue his old war against Israel, less attention has been paid to the paper’s old Communist roots. Or its support for the murder of Jews. When the old Freiheit had endorsed the Hebron Massacre of Jewish men, women, and children, with the headline, “The Arab Uprising is Spreading – Zionist Fascists Have Provoked the Arab Uprising”, Jewish communities burned copies of the paper.

Writers for the Communist rag were assaulted on the streets. Newspaper vendors, back then often Jewish, refused to sell the paper. Advertisers were forced to boycott it. When the Freiheit endorsed the Hitler-Stalin Pact, its remaining writers were taunted as “Communazis” and greeted with chants of, “Heil Hitler”. That should have been enough for any decent person.

But the Puffin Foundation decided to fund a reboot of the antisemitic Communist rag under a non-profit, the Association for the Promotion of Jewish Secularism. Jacob Plitman, a former deputy director of the anti-Israel campus hate group J Street U, headed the reboot. Beinart, a longtime anti-Israel activist, became its marquee name, and Bernie Sanders, an old friend of all things red and antisemitic, contributed an editorial about antisemitism.

Jewish Currents promotes BDS, attacks the Jewish State, and promises to expose Jewish power. Pieces at the hate paper take up the old Freitheit banner by accusing Jews of fascism and Nazism. Meanwhile the media blandly treats Jewish Current as just another paper.

Even while the Puffin Foundation funds the glamorization of Communism, its money comes not only from capitalism, but from one of the few outposts of the survivors of Communism. Perry Rosenstein had sold Brighton-Best Socket Screw Manufacturing to a Taiwanese consortium.

Rosenstein died last year of the coronavirus, but not before funneling money from the Taiwanese sale into Puffin. The millionaire leftist was never able to fulfill his dream of joining the Lincoln Brigade, but did fund the Abraham Lincoln Brigade Archives which spins off Common Core lesson plans about the Communist brigade intended for schools. Born to Bundist parents, he was a red diaper baby who spent his money supporting the radical extremists he loved.

The orbituatries called him a philanthropist or a social activist continuing the long tradition of ignoring what was right in their faces. Rosenstein and the Puffin Foundation easily bridged the gap between radicalism, leftism and liberalism. Rosenstein and Puffin were major backers of The Nation and In These Times, but they also handed out “creative citizenship” awards to William Barber, Bill McKibben, Ben Jealous, Tony Kushner, Colin Kaepernick, and Parkland activists. Even while the media inveighs against extremism, Beinart and Jewish Currents continue to appear in favorable media mentions without being called what they really are.

In a sea of leftist foundations, the Puffin Foundation stands out for its remarkable obsession with maintaining and preserving the products of bygone Communist propaganda, art posters, theatrical productions, and propaganda broadsheets. It does so often with little to no distance from its poisonously murderous subject matter without ever being held accountable for it.

Jewish Currents was recreated to be an incubator for the murderous leftist hatred of Jewish life, religious community, and nationhood that killed countless Jews under Soviet Communism. A leading writer at Currents, and the secretary of its parent foundation, the Association for Promotion of Jewish Secularism, is Naomi Dann, a founder of one of the most antisemitic chapters of Students for Justice in Palestine in the country, and a media program manager at Jewish Voice for Peace, which sponsored talks by a bigot who claimed Jews drink blood.

That’s exactly what anyone ought to expect from a hate sheet whose origins were in a Communist Party rag that was burned in the streets for celebrating the murder of Jews.

But the Puffin Foundation, glutted with Taiwanese cash from the sale of Rosenstein’s business, will continue. And the leftists who call themselves progressives or even liberals will pretend not to notice its awkward interest in Communism while applauding it for funding “progressive” ideas.

Editor David Klion, formerly of Al Jazeera America, funded by a state sponsor of Hamas, which was sued over its antisemitism,recently tweeted, “At @JewishCurrents, we are launching a dedicated investigative reporting fund to do hold (sic) Jewish institutional power to account.”

The hit pieces on Jews will be funded by the Puffin Foundation.

The question is when will the institutional power of the Puffin Foundation be held to account?

Greenfield: There Is No Biden Administration