In “Surf City,” there were two girls for every boy. But in Swamp City, there are four cops for every Congressman. 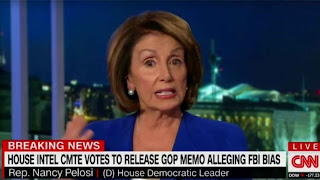 That doesn’t refer to Washington D.C.’s already huge concentration of law enforcement and multiple overlapping police forces. Washington D.C. has the highest ratio of police to people of any major city in the country. There are 650 officers for every 100,000 residents in D.C. That’s 40% higher than any other major city in America including Chicago and Baltimore. It has a 58% higher police ratio than New York, more than double that of Boston, and triple that of L.A.

But that’s nothing compared to the private police force dedicated only to protecting Congress.

The Capitol Police, which has been in the spotlight since the Capitol Riot, has over 2,000 sworn officers. Pelosi’s private police force is the 19th largest police force in America.

It’s already larger than the police forces of Atlanta, Baltimore, Denver, and Milwaukee.

While Democrats advocated defunding the police, their private police force budget shot up from $375 million in 2016 to $460 million in 2020. And now it’s demanding even more money.

Speaker Pelosi claimed, “It’s going to take more money to protect the Capitol in a way that enables people to come here.”

How much money? Who knows.

Colonel Bowie managed to hold off the Mexican Army at the Alamo for over a week with a few hundred men, but the Capitol Police couldn’t keep Congress for an hour with a thousand.

Acting Chief Yogananda Pittman, told Congress that she needed funding for 212 new sworn officers and 111 dignitary protection agents. That’s a fancy name for the congressional version of secret service agents for “high-profile members of Congress.” Teams of four of these “agents” accompany their important charges. Since then, the number of agents has been increased and there are six dignitary agents protecting every single “high-profile member of Congress”.

(Some dignitary protection agents had even been deployed to protect the homes of “high-profile members of Congress” during the Capitol Riot and weren’t available to help during the fighting.)

That would take the Capitol Police up to at least 2,200 sworn officers. And with 535 elected officials in the House and Senate, that’s a ratio of 4 cops for every congressman and woman.

Meanwhile the high-profile members get a private security detail of 6 cops.

While the names of those high-profile members are not available for security reasons, these likely included senior leadership figures in both parties as well as high-profile politicians who attract a lot of threats. That would likely include some members of the Squad and other Democrat proponents of police defunding. Or defunding other people’s police anyway.

While Democrats have advocated for police defunding, their House and Senate majorities currently enjoy some of the densest possible ratio of police for them and their employees.

Between members of Congress and their staffers (not to mention kits, cats, sacks, and wives), that’s over 6,500 people to be protected by 2,200 sworn officers. Or a cop per 3 employees.

Even Vatican City, with the highest police ratio in the world, is more modest than that.

The shopkeepers of Kenosha would have appreciated that kind of police ratio during the Black Lives Matter riots that robbed them of their livelihoods with the backing of the Democrats.

But it stands to reason that the big government elites of the political faction that embraced police defunding not only need their own private police force, but that while the people in the cities whose police forces they want to defund have to make do with 440 officers per 100,000 people in Chicago and 320 officers per 100,000 people Detroit, they enjoy a 1 officer per 3 people ratio.

Police defunding means no cops to answer the call in Seattle or Minneapolis, but 4 cops for every Democrat Congressman whose life is much more important than those of mere taxpayers.

Some might argue that Republicans also enjoy the benefit of a private police force. But that’s not how Speaker Pelosi sees things. According to Pelosi, Republicans are the enemy.

Speaker Pelosi insisted on “more security for members, when the enemy is within the House of Representatives, a threat that members are concerned about.” Who is this enemy within?

If the “enemy is within the House of Representatives”, then the only solution is to turn the Capitol Police into a Praetorian Guard to accompany Democrat police defunders everywhere. And then Republicans can create their own police force to protect them from the Democrats. If America is going to live out the last era of the Roman Empire, we might as well do it in style.

And since history has been cancelled on account of racism, Pelosi will be really surprised when Chief Yogananda Pittman threatens to replace her unless she ups the ‘donativum’ to the force.

Meanwhile the calls for more money and more personnel for the Capitol Police continue to grow.

D.C. is already the most overpoliced city in America. And yet somehow, no one could manage to cope with one day of riots. The Capitol Police, with 2,000 sworn officers, over 1,000 of whom were on duty, claimed that they couldn’t cope with the riot and needed the National Guard.

The D.C. police force, with 3,750 sworn officers, the Park Police, which was also on the scene, and the multitude of other law enforcement personnel and services, some you have heard of, like the FBI, and some which you may have not like the Supreme Court Police (yes, they exist), the D.C. Protective Services Division, and the Federal Protective Service, couldn’t help either.

Washington D.C. is the epicenter of law enforcement in the country. There are more law enforcement personnel in the imperial city than anywhere in the country. And there are more individual agencies, services, and sub-services with armed personnel than anyone can count. Nearly every federal agency has its own private police. Some have SWAT teams. These are often attached to the Office of the Inspector General (OIG) departments based out of D.C.

Four years ago, the Obama administration sent a contingent of heavily armed agents wearing body armor on a Department of Defense plane to Chicken, Alaska, a town of 17 people, on an EPA investigation of Clean Water Act violations that turned up absolutely nothing. If the Democrats could do this to Chicken, Alaska, one of the furthest places in America, they can manage to protect 2 square miles and a handful of buildings with thousands of officers.

Four cops for every Congressman is more than enough in Swamp City, USA.

If Cuomo Goes Down, So Should Whitmer, Newsom, Murphy, and Wolf