Senator Schumer began his pitch for gun control by falsely claiming that, “hundreds of thousands — maybe millions — of people walking the streets today because we passed [the 1994 Brady Handgun Violence Prevention Act] would be dead.” 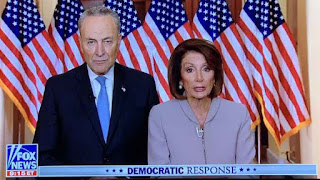 The country hit an all-time high of 24,703 murders three years before the Brady Bill and even assuming that number had held steady in all the years since, we would be nowhere close to Schumer’s millions. Senator Schumer’s false claim that he saved millions of lives with his mostly useless background checks is typical of the lies that drive Democrat gun control hysteria.

Then Schumer topped that howler with an even bigger howler when he argued that, “We didn’t know there would be an internet, so we didn’t prohibit internet sales without a background check.” Not only did the internet exist at the time, but Schumer had voted for the bills that had helped fund the development of the internet. If only he had known what he was voting for.

What we need is for Democrats to stop freeing criminals and then complaining about guns.

The USA Today network unleashed stories of shootings surging across the country through its local papers. The stories blame the increase in shootings on unemployment, inequity, and gun sales, not on the push by Democrats and the media to free criminals to save them from the coronavirus and the racist inequity of locking up murderers, rapists, and robbers behind bars.

The vast majority of shootings are carried out by gang members and other criminals associated with organized crime. Indeed, one of the USA Today stories noted that in Washington D.C., wearing masks had led to shootings because gang members couldn’t recognize their enemies.

“Those context cues are not visible with masks, so you don’t know who’s up on you until they’re right there. In neighborhoods with a lack of safety, that sort of fear leads to a lot of people carrying guns,” a member of a black community group explained.

Maybe Schumer can introduce a bill banning masks instead of trying to ban guns.

In 18 days, 416 people were shot in Chicago in two neighborhoods involving 6% of the city’s gang factions. A sociology professor was able to predict the likelihood of who would be shot next by using data from previous arrests. But Chicago Democrats had banned that sort of predictive science in favor of screaming about inanimate object violence even though their own police datashows that, “in 95 percent of cases where CPD was able to identify the possessor of the crime gun, that individual was not the original, lawful purchaser of the firearm.”

Obviously, what’s needed in Chicago is another background check bill from Chuck Schumer.

A Los Angeles Times board editorial from September 2020 described a mass shooting at an illegal marijuana farm as a “sign of the times” and blamed the “presence of guns”.

It didn’t occur to the Times that the presence of criminals and drugs might have had a little to do with the shooting spree. Guns don’t tend to transport themselves to mass shootings. As the Times’ own reporting documented, the killing of 7 people by multiple shooters while leaving behind a thousand pounds of pot valued in the millions was the work of organized crime.

The region, in the words of the Times, is “favored by drug traffickers” and offers “a pool of potential couriers, and the U.S.-Mexican border — across, over and beneath which drugs and the proceeds of their sale flow”. If only there were some sort of barrier there: perhaps a wall.

Mexican drug cartels don’t have any difficulty getting their hands on guns or heavy firepower. In Mexico, cartel gunmen with machine guns mounted on trucks had defeated the Mexican army in a battle that lasted for hours. If only Mexico had its own Schumer and more background checks.

Mexico has only one gun store and gun owners are only allowed to sell their guns back to the government. Licenses are fantastically expensive and hard to come by. But somehow, in the gun control utopia south of the border, criminals have machine guns mounted on trucks without any background checks. And they’re carrying out mass shootings in an America without walls.

The bad Democrat habit of only paying attention to crime involving guns, and only then to argue for tighter gun control, would be bad enough in an ordinary year, but is especially cynical in a year when its elected officials championed defunding the police and setting the criminals loose.

In San Francisco, progressive Soros DA Chesa Boudin boasts of never having prosecuted a single case. His office has managed to secure only 16 convictions since he took office, two of them for burglary, 2 for sexual assault, and he tried and failed to secure a conviction for a gun felony. Meanwhile his office racked up zero homicide convictions for a city with 47 murders.

Pro-crime prosecutors like Boudin in San Francisco, George Gascon in Los Angeles, and Larry Krasner in Philly backed by big lefty donors like Soros are the wave of the Democrat future,

“There has to be teeth. There needs to be consequences,” Commissioner Danielle Outlaw, a black woman who had been hounded out of her job in Portland by Antifa, complained.

What’s the point of passing gun laws that won’t be enforced anyway? Just like in Mexico, these laws won’t keep guns out of the hands of criminals, but will keep people from being able to defend themselves against the criminals. Schumer isn’t about to get on the wrong side of Soros, of Netflix CEO Reed Hastings, or other big lefty donors to pro-crime DAs who protect criminals.

Gun control stopped being anything other than an obscene farce once Democrats entirely threw out the idea of fighting crime. The Democrat plan is to free criminals, open up borders, and then pass gun regulations to stop the influx of gang members coming out of prison and across the border from being able to buy the guns with which they plan to shoot each other.

Unexpectedly, criminals have ways of illegally getting hold of the things that they’re officially not supposed to have. Some might even say that’s the essence of their criminal profession.

Gun control is coming from the same Democrats who insist that banning drugs won’t prevent people from buying them anyway, but believe that banning guns will get them off the street.

It hasn’t worked in Mexico or Mexifornia, but somehow it’s going to work in America.

Democrats want to pass gun laws they won’t enforce to stop the criminals they won’t arrest. And then they sneer at “thoughts and prayers” as ineffectual compared to their awesome bills.

If police are evil and prisons are awful, then what are the new gun laws meant to accomplish?

Pelosi and Schumer would be better off finding a church and synagogue that won’t cause them to burst into flames when they try to pass its threshold and try a few prayers instead.

And then they can abandon their flirtation with criminals and stand with their victims instead.

Gun violence didn’t surge or spike, depending on which media buzzword you go with, because guns were somehow more available in the plague year. There was no gun surplus in 2020. If anything firearms and ammunition became more expensive. But there was a surplus of criminals unleashed by Democrat officials and prosecutors in cities across America.

The vast majority of serious crimes are committed by career criminals who have not been previously caught or charged, or by repeat offenders who have been in and out of prison.

Increasing the supply of guns doesn’t significantly increase crime because there are only a limited number of criminals or potential criminals out there. That’s why Switzerland and Israel, or Colonial America, aren’t and weren’t picking bodies off every street corner the way that Chicago is. But when you increase the supply of criminals, then you naturally get a lot more crime.

Democrats increased the supply of criminals by opening up prisons and the border. They tried to defund the police and they stood with pro-crime rioters against their own police forces. Their elected officials decriminalized everything from theft to drugs while their prosecutors pled down crimes and then watched as the criminals walked away thanks to criminal justice reform. They eliminated bail or fundraised to bail out criminals and then watched while they went on killing.

Keep Faith Within the Storm