Secretary of State Antony Blinken began his confirmation hearing by reciting a family history of antisemitism. A month later he unveiled a ban named in the memory of an antisemite.

“Jamal Khashoggi paid with his life to express his beliefs,” Blinken claimed. 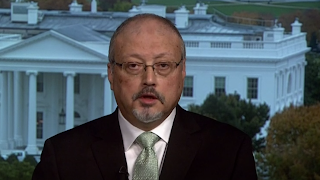 Those beliefs that Khashoggi gave his life for included his contention that the Protocols of the Elders of Zion were real, and that Jews were deceivers with no connection to Israel. It also included the Muslim Brotherhood member’s support for the Hamas war against Israel.

Last October, Biden falsely claimed that the world was “mourning Khashoggi’s death and echoing his call for people everywhere to exercise their universal rights in freedom.”

Jamal Khashoggi didn’t believe in universal rights or freedom. He believed in the absolute supremacy of Islam. He died in the service of two Islamist regimes, Qatar and Turkey, that have built their foreign policy around supporting Islamist terror and the suppression of human rights.

In conversations with American diplomats, he claimed that most Saudis supported Osama bin Laden because they hated America, and came out against education for women.

Blinken’s remarks on what he and the Biden administration have dubbed the ‘Khashoggi Ban” targeting some of the Qatari agent’s alleged killers, called him a journalist, while neglecting to mention that Khashoggi got his start in ‘journalism’ through Adel Batterjee, whom the Treasury Department had at one time listed as one of “the world’s foremost terrorist financiers”.

Who were these Arab youths?

“Khashoggi showed me a photo published in the English language paper Arab News, in 1988. It depicted him inside Afghanistan, standing with a tall, young, Kalashnikov-wielding Saudi named Usama Bin Laden,” Barnett Rubin wrote in Afghanistan from the Cold War through the War on Terror.

“We were hoping to establish an Islamic state anywhere,” Khashoggi reminisced about their time together in the Muslim Brotherhood. “We believed that the first one would lead to another, and that would have a domino effect which could reverse the history of mankind.”

That came from Lawrence Wright’s epochal book, The Looming Tower. In Thomas Hegghammer’s Jihad in Saudi Arabia, he noted that, “Bin Ladin and Azzam actively encouraged and facilitated the visit of Saudi journalists such as Jamal Khashoggi to Afghanistan.”

That’s a reference to Abdullah Azzam, a founder of Al Qaeda, known also as the Father of the Global Jihad. In Peter Bergen’s, The Osama Bin Laden I Know, Khashoggi describes becoming an “activist” in “political Islam”, meeting Azzam, and having Osama bin Laden invite him to Afghanistan.

Osama bin Laden, Khashoggi wrote, “decided to contribute his experience and capabilities to the Mujhadeen”. He glorifies Osama, quoting his boasts and praises, and contacts his mother.

The media knew all along who and what Jamal Khashoggi was. He made no real secret of it. The leading journalists writing about the origins of Al Qaeda invariably brushed up against Khashoggi, often using him as a source because of his ties to Osama bin Laden.

The reinvention of Khashoggi into the Horst Wessel of the Democrat foreign policy establishment didn’t happen because the media didn’t know his track record.

Jamal Khashoggi was a member of the violently antisemitic Muslim Brotherhood, who at the time of his death was planting columns from Qatar, a state sponsor of the Brotherhood, in the Washington Post. Now, Khashoggi is the subject of his very own government policy.

In October, Biden had claimed that, “Jamal’s death will not be in vain, and we owe it to his memory to fight for a more just and free world.” A just and free world is the last thing that Khashoggi would have wanted. But Biden is fighting for the kind of world he did want.

The Biden administration picked Iran over the Saudis in Yemen, he picked the old Saudi establishment that Khashoggi was associated with over its reformist crown prince who had favored rights for women, and he’s moving to pressure Egypt over the Muslim Brotherhood.

Much as Blinken monetized a family history of antisemitism in support of an antisemite.

These policies that will deprive millions of human rights are being done in the name of human rights even if it’s only the human rights of Osama bin Laden’s old friend who has since gone to join him in whatever Islamic paradise of virgins that Jihadists believe awaits them in the afterlife .

Taylor Force had been deployed to Iraq and Afghanistan, and had served at Fort Hood in the year of the infamous Islamic terrorist attack on the base, but was killed in Israel as a civilian.

The American veteran was murdered by Bashar Masalha, an Islamic terrorist who received a hero’s funeral and was praised by the Palestinian Authority.

“The Martyr Bashar Masalha returned from Qalqilya to his village Hajja in a procession,” PA TV gushed, describing the burial of a terrorist who had murdered an American as a “national wedding” in which he was “embraced by the soil of his homeland as a Martyr.”

In response to the Palestinian Authority’s refusal to stop funding terrorism, the Taylor Force Act attempted to cut off foreign aid to the terrorist entity. While the Trump administration took the Taylor Force Act and other laws preventing the government from funding Islamic terrorists, the Biden administration is working to bypass it and send money to the terrorists killing Jews.

Secretary of State Blinken, fresh from describing the travails of his ancestors who suffered pogroms and genocide, would like to go back to paying Islamic terrorists to kill Jews.

Meanwhile, the Khashoggi Ban will make Osama bin Laden’s friend an official martyr, not of Al Qaeda, but of the Biden administration.

Greenfield: How a Foundation Obsessed With Communism is Leading the War on Israel