When Hollywood wanted to divert attention from its sexual abuse of women, it created Time’s Up and staffed it with political hacks from the Obama administration. 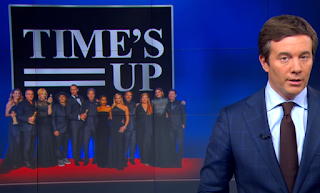 Time’s Up was built as a rival to the decentralized social media #MeToo movement. Replacing social media outrage driven by random people with a formal organization funded by Hollywood capital and controlled by the Democrat non-profit sector could prevent another Weinstein mess.

Despite being backed by Hollywood millionaires, the organization’s legal defense fund launched what became the largest fundraiser on GoFundMe: totaling almost $25 million. But critics pointed out that Time’s Up’s money was mostly going to salaries, rather than to victims.

There was even more outrage when Time’s Up Now co-sponsored a retreat at a spa filled with agents from CAA: a powerful talent agency backing Time’s Up which had been accused of covering up Weinstein’s crimes. Rose McGowan, a key #MeToo figure, tweeted, “Times Up A vile PR stunt, a front for evil CAA & other human traffickers like Weinstein.”

In 2019, Lisa Borders, the CEO of Time’s Up, was forced to resign when her son, a formerly homeless yoga instructor, was accused of groping one of his clients during a “healing” session. Borders explained that she was resigning because she wanted to defend her son, but still got paid $591,000 for half a year’s work as part of a “severance agreement” with the group.

Borders was replaced by Tina Tchen, Michelle Obama’s former chief of staff, who spent 2020 tanking what was left of the little credibility that the Obama/Hollywood front group still had.

Oprah Winfrey had helped launch #TimesUp with a Golden Globes speech declaring, “Their time is up” and she also hosted an interview with Time’s Up leaders on CBS: whose former CEO, Les Moonves, had been TV’s own version of Harvey Weinstein. The Time’s Up celebs that Oprah interviewed, Shonda Rimes, and Natalie Portman, had not been assaulted by Harvey Weinstein. Or anyone. (McGowan also rightly blasted Portman’s theatrics.)

But when a documentary about the women alleging that they had been raped by Russell Simmons, a celebrity hip-hop producer who was also a pal of racist Nation of Islam leader Louis Farrakhan, was close to release, Oprah Winfrey pulled out, under pressure from Simmons.

Time’s Up not only joined Oprah in refusing to support the victims, but allegedly started a whispering campaign to sabotage the documentary. A Hollywood Reporter investigation tied together Tina Chen and the role of former Obama consoligere Valerie Jarrett, and noted that, “$2.9 million of Time’s Up gross receipts in 2018 came from three undisclosed donors.”

But the complete collapse of Time’s Up came when Tara Reade accused Joe Biden of sexual assault. Reade had initially reached out to people at Time’s Up only to be told that the organization legally couldn’t support her because Biden was a political candidate. President Trump was also a political candidate, but that hadn’t stopped Time’s Up from attacking him.

The same organization that recently put out a statement by Tina Tchen headlined, “Donald Trump Must Be Removed From Office”, claimed that it couldn’t speak out against Biden for legal reasons. The legal reasons were a joke, but the political ones were there for everyone to see.

Tchen managed to praise Biden for having the right response to the allegations. This wasn’t surprising as Time’s Up was populated by former Obama people, and in a glaring conflict of interest, its public relations were being handled by Biden advisor Anita Dunn. Beyond being Biden’s “decision-making authority”, Dunn had also provided advice to Harvey Weinstein.

“I actually cried a little because I felt really betrayed,” Reade had said. “They never told me that their public relations was run by Anita Dunn. I found out in real-time reading Ryan’s article. I gave them so much personal information and they say they didn’t give it to Biden. But come on. They said they had firewalls or something.”

Time’s Up said lots of things. But then it did very different things.

The Chief Strategy and Policy Officer for Time’s Up, Jennifer Klein, maxed out her donations to Biden. Klein, a former Obama and Clinton vet, has now been appointed by Biden as the co-chair of Biden’s new White House Gender Policy Council, alongside Julissa Reynoso, Jill Biden’s Chief of Staff, an Obama ambassador, and a Paul and Daisy Soros Fellow.

The White House Gender Policy Council is tasked in Biden’s executive order with, among a multitude of other things, combatting “sexual harassment”. The Council is expected to throw out policies by former Secretary of Education Betsy DeVos that protected the due process rights of students who had been accused of sexual misconduct on college campuses.

Had Biden faced the same lack of due process as the average college student, he would have been immediately found guilty. But Time’s Up insisted that there was no organization that existed to try Biden. Instead it would be up to the voters to pass judgement on his “character”. That was a convenient rationalization for refusing to stand with the women accusing Biden.

Now Klein, who was donating to the abuser, will head up Biden’s program to protect women. Except of course those women who might decide to come forward and accuse her boss.

Time’s Up had always existed to silence actual victims on behalf of influential Democrats. It was a partnership between Hollywood and Obama operatives. Rolling executives of Time’s Up into Biden programs just makes the arrangement public.

Klein combined her time at Time’s Up with serving as co-chair of the Women and Families Policy Committee for the campaign of an accused sexual abuser. Now the Biden campaign elevated her campaign role to an administration role. And, in an interview with Ms. Magazine, Tina Tchen touted Klein as “an expert on both domestic and global gender issues”.

“The policy of this administration is that every individual, every student is entitled to a fair education — free of sexual violence — and that all involved have access to a fair process,” Klein argued.

Fair process and due process are not the same thing. A due process protects the rights of the accused while a fair process is in the eye of the beholder. Equity dispenses with due process and replaces it with bias that is only ‘fair’ if you believe that society is fundamentally unfair.

Of course we already know the outcome.

Tina Tchen had already tweeted that due process rules for accused abusers on campus are wrong and the National Women’s Law Center, which administers the Time’s Up Legal Defense Fund, had sued to stop student accusers from being cross-examined after an accusation.

The Biden administration will move to ban cross-examination of campus accusers, but when Reade accused Biden of sexual assault, she was cross-examined and then smeared in the media, while Biden was hardly ever asked about any of the allegations of sexual misconduct.

That’s the ‘fair’ standard of Time’s Up in action.

Believe Reade or don’t, Biden’s inappropriate conduct with women has been captured on video. It’s not hard to find photos and video clips of him inappropriately touching women and girls. That might be one reason he chose to rename the White House Council on Women and Girls that Tina Tchen had headed for Obama to the White House Gender Policy Council headed by Klein.

The existence of women and girls is routinely denied by lefties who insist on using euphemisms like “menustrators” (She the People), “chest-feeders” (NHS), and “people with vaginas” (Planned Parenthood) and by Biden, one of whose first moves was to effectively eliminate women’s sports. Now women have also been erased from the Council on Women and Girls.

And who better to oversee this on behalf of a sexual abuser than a senior figure in an organization that exists to insulate powerful Democrats from the women accusing them.

Saving America Begins By Cleaning Up Our Own Republican Party