A social ill takes place on three levels: the object level, the individual level, and the social level.

While the old prohibitionism of sin substances, liquor, drugs, and pornography has been ridiculed and its legal infrastructure dismantled, the obsessive certainty that guns are inherently corrupting holds sway. The lefty media insists that the only solution to gun violence is prohibitionism and more prohibitionism. 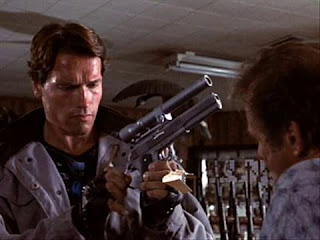 Yet the argument for blaming guns is much weaker than the one for blaming drugs or alcohol. Alcohol and drugs are addictive compounds that shape how we think. Guns, unlike alcohol and drugs, aren’t addictive. Nor do they influence behavior. Their relationship to us remains an external one.

And object-oriented prohibitionism is the least meaningful way of looking at a social problem.

In the prohibitionist and anti-prohibitionist discourse over gun control, the familiar choice between civil rights and mass death dominates the debate. It’s the same framework that the Left rejects when it comes to crime and national security, but embraces on the issues of environmentalism and guns.

Guns do kill people in the same purely mechanistic sense in which alcohol, drugs, or rat poison do. But guns are a means, not a motive. They don’t explain why gun violence happens, only how it happens.

Above the object level is the individual level. Guns don’t really kill people; killers do.

Tackling a social ill at the human level explores the moral and mental state of the individual. Modern society is secular and scientific rather than moral, and reduces human evil to a medical condition. Mental illness explains the behavior of some killers, but others have no explanation other than evil.

Gun violence is how people kill. It’s not why they kill. Nor is it the only way to commit mass murder.

Most gun violence is still gang violence. Mental illness isn’t killing 5 or 6 people in Chicago, Detroit, or Baltimore over the weekend. The media overlooks regular mass shootings in major cities, while zooming in on unusual mass shootings in suburban communities. That’s because the gun control movement really doesn’t want to talk about the social component of gun violence and organized crime.

Usually, the Left loves root causes. It can trace any individual dysfunction to the problems at the heart of a society. But when it comes to guns, it refuses to look past the physical object, while blaming everyone responsible for the existence of guns, from firearms manufacturers to the NRA. But blaming everyone involved with the existence of an object is not an examination of the root causes of its misuse.

The prohibitionists weren’t dealing with the root cause of alcoholism by busting up gin mills. The latest attacks on firearms manufacturers have just as little to do with the problems they claim to care about.

The social crises of alcohol and drug abuse had at their root cause social dislocation and a lack of purpose. No amount of prohibitionism, a negative, will provide people with a meaningful life.

The white suburban shooter and the urban black gang member lack purpose and meaning. Banning guns won’t stop them from killing. Nor will it turn their lives around. It’s the act of a society that doesn’t want to address what is wrong on the inside and instead clings desperately to waging war on externalities.

Americans used to have access to firearms on a scale that would horrify any contemporary crusader. Shootings weren’t treated as a problem caused by being able to buy a handgun in a hardware store, but as a sign that civilization, whether in an urban slum or a western town, had broken down.

In the age of government, uncivilized behavior is treated as a sign that regulation has broken down. But regulations control what people do. Not who they are. Murder is not first and foremost a regulatory failure, and only occasionally a mental one, but it is universally a moral one.

When social problems are reduced to objects, then people are also objectified. The killer pulls the trigger in the same mechanical way as the gun fires. He has no more of an inner life than his tool. The only solution is equally mechanistic: get rid of all the guns, and no more people will be shot. It’s a solution that ignores the realities of human ingenuity and depravity. It works for machines, not people.

But when we look at the individual and the social level, we can see both positive and negative options. The false choice between civil rights and mass murder that the gun control movement offers us is replaced with seeing prevention not in terms of how to take away something, but how to add value.

The gun is the least relevant and the least interesting aspect of why a killing really takes place.

On the social level, many killers are part of a real or virtual social community which affirms their crimes. It is no coincidence that mass shooters cite their predecessors as inspirations or that gang violence takes place within a territorial network of criminal communities and theological gang religions. Killing in these contexts is not just a method; it’s a culture. It has its own moral code. One that is antithetical to ours.

A moral and cultural conflict cannot be fought and will not be won with impersonal regulations.

On the individual level, the killer is driven by impulses. The gun is how he chooses to actualize those impulses. But mass killers have driven cars and trucks into crowds. They’ve started fires and set off bombs. How is not the most important question when it comes to a killer. The question is why.

And yet we spend very little time talking about the social infrastructure and moral state of the killer. Instead, the gun control movement, which dominates a political party, an ideology, and its associated institutions — including academia and the media — obsesses endlessly about the mechanics of the kill.

It compares America to other countries, as if nations and cultures were as interchangeable as mechanical moving parts, and asserts that the solution is making them interchangeable. The killers are also assumed to be interchangeable. What drives them to kill is not internal, but external. Anyone, at any time, the gun control movement suggests, can turn into a killer when faced with a tempting gun.

If murder is a mechanical problem, then it’s hopeless. Forget the guns. Everyone has a car or can get their hands on one. Accelerants are available in every store. Knives are casually sold everywhere.

If we are truly savages, then no amount of regulation will restore civilization. The killings will continue.

A civilization’s fundamental laws are moral. Its true strictures are not external, but internal. Their power lies in the moral and social order. Crime and violence are a sign that our moral and social orders have broken down. No amount of regulations can civilize savages. And few regulations are needed for civilized men. What fundamentally separates the Left and the Right is the understanding that man is not an ape or a machine. And that his ills cannot be solved with the mechanical tinkering of regulators.

Gun control and gun violence are both expressions of the amoral and inhuman worldview of the Left.

"Show Your Papers" in the USA: The Police State is Coming