“We are not in favor of giving a vote to the negro, because we believe that he is not fit to enjoy that right,” Senator Allen G. Thurman once said.

These days, even while Democrats topple the statues of Abraham Lincoln and Ulysses S. Grant, two men that Thurman hated, the old dead racist has become the basis for the unconstitutional Democrat campaign to impeach President Trump after leaving office. 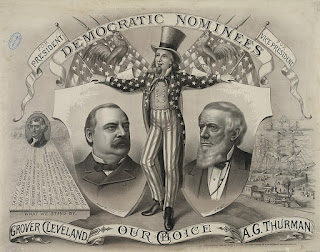 Thurman, who was picked by the Democrats as their nominee for Vice President, had played a major role in the sole case of the Senate deciding to impeach a public official after leaving office. The Democrat case for impeaching President Trump rests on that one case.

Legal partisans have spent weeks debating whether President Trump can be impeached after leaving office. Every single one of these analyses is heavy on rhetoric and light on precedent.

There’s a very good reason for that.

Impeachment exists to remove officials who are in office. The brilliant legal scholars who argue otherwise might want to put down their law books and check a dictionary. Impeachment shares its origin with the more commonplace word, ‘impede’. The whole point of impeachment is to impede public officials from holding office by using legislators as investigators and courts.

The post-office impeachment arguments remind me of the movie, Gus, where a mule is allowed to play professional football because the referee can’t find anything in the rulebook that says the players can’t be mules. Every argument for impeaching President Trump comes down to the same position that mules can play football because the Constitution never says they can’t.

“It makes no sense whatsoever that the president or any official could commit heinous crimes against our country and then defeat our impeachment powers and avoid the vote on disqualification by simply resigning,” Senator Schumer argued.

Like saying, “You can’t fire me, I quit”, that gets the same result.

The purpose of impeachment is removing an official from office. If he quits, then he’s removed. And if he committed “heinous crimes” then a court of law could try him for those offenses.

Democrats are obsessed with removing President Trump from an office he no longer holds, but their only precedent for that is the impeachment of Belknap, Grant’s Secretary of War, who was tried and acquitted by the Senate after leaving office.

“The Senate convened a trial, and voted, as a chamber, that Mr. Belknap could be tried ‘for acts done as Secretary of War, notwithstanding his resignation of said office.’ The language is crystal clear, without any ambiguity,” Schumer blotivated. “The history and precedent is clear: the Senate has the power to try former officials.”

Schumer is quoting a resolution by Senator Allen Thurman, who opposed President Lincoln’s emancipation proclamation and campaigned against allowing black people to vote. But that’s just the old Democrat habit of refighting the Civil War on the side of the Confederacy. Even while accusing President Trump of sedition, the Democrat cause is wedded to sedition.

The Democrat precedent for impeaching President Trump is a resolution put forward by a Senate Democrat who had opposed the Grant administration because he was a violent racist. Senator Thurman had previously delivered a speech to the Democratic State Convention in West Virginia declaring that Republicans wanted “to put the heel of the negro upon the neck of the white man” with the 14th Amendment.

That’s the Constitutional scholar on whose resolution the Democrat impeachment crusade rests.

If Schumer and the Democrats are going to use Thurman’s resolution as a constitutional precedent, making him the arbiter of what the Framers thought, then they must share his opinion of the 14th Amendment and allowing black people to vote. That would be consistent.

Eight years before the impeachment of Belknap, Thurman was warning that there would be another civil war, leading to “a war of races in the South and the extermination of the negro”.

Thurman went on to argue that black people were inferior, couldn’t be allowed to vote, and that they were little more than brutes who would be killed if they kept demanding equal rights.

This is the author of the Democrat precedent for trying President Trump after leaving office.

Senator Thurman’s opposition to President Grant and attempts to smear his administration had everything to do with his racism and support for the Confederacy, rather than the rule of law.

The sole Democrat precedent for post-office impeachment comes from a racist who was threatening the country with a second civil war, and the extermination of black people, and was waging a political war against President Grant because he had defeated the Confederacy.

It’s not just Schumer. The Belknap trial and the Thurman resolution have been widely quoted.

Every time the media trots out a legal expert to explain why President Trump can be impeached, he turns to the Belknap trial and the Thurman resolution as if they were the Constitution.

The legal experts, like Schumer, don’t discuss how the Belknap trial concluded.

There were only enough votes to impeach Secretary of War Belknap in the first place because legislators argued that Belknap had resigned to avoid impeachment. But the Senate acquitted Belknap because its members believed that a former official couldn’t actually be impeached.

Impeachment failed because 23 senators voted, “not guilty for want of jurisdiction.”

Not only did the Belknap trial fail because Schumer was wrong, but the entire premise doesn’t even apply. Had Belknap’s term naturally expired, there would have been no impeachment.

It was only because Belknap had so blatantly resigned to avoid impeachment that his behavior was so provocative that he was illegally impeached to avoid creating a bad example.

When your only real precedent for trying a former president in American history is one case from 1876 of a cabinet official that was highly controversial at the time and ultimately failed, you’re gonna need a whole lot more precedents to actually impeach a former president.

Especially when your only real basis for it is a resolution by a Democrat racist seditionist.

The ultimate goal of that plot was the restoration of Democrat power and of segregation.

Democrats failed to make their case in actual courts, but holding hearings and an absurd impeachment tainted President Grant and Republicans in the eyes of the American public. Grant would labor, even while dying of cancer, to finish his memoirs, provide for his family and redeem his reputation from the Democrat smear campaigns of Grant Derangement Syndrome.

That’s the playbook that Democrats are following in their campaign against President Trump.

If the Democrats believe that President Trump is actually guilty of committing the crimes for which the Constitution says that can be impeached, “treason, bribery, or other high crimes and misdemeanors”, then why not bring them into a court of law?

Democrats and their legal hounds have generated numerous investigations. New York has been drowning in blood while Attorney General Letitia James and Manhattan DA Cyrus Vance have spent their time inventing new Trump investigations. And those haven’t fared very well.

The US Attorney’s office in Manhattan is done with the “Individual-1” investigation that Democrats had been claiming would “lock up” President Trump. But surely if the Democrats claim to have evidence of “high crimes and misdemeanors”, their allies in the FBI and among federal prosecutors would be happy to see them. Why settle for a mere impeachment and disqualification when the Democrats could finally fulfill their dream of seeing him behind bars?

Especially when they’re almost certain to lose their latest impeachment again in the Senate.

Every single presidential impeachment in our history was a political proceeding. The proliferation of impeachments and attempted impeachments in recent American history is a symptom of partisan abuse of legislative powers, not of higher ethical standards.

The Framers of the Constitution wanted impeachment to be taken seriously.

The Democrats are turning America into Venezuela, endlessly borrowing and spending money that doesn’t exist, while keeping the streets full of soldiers, and using security powers against political opponents, while their Big Tech oligarchy suppresses opposition political speech.

Washington D.C. is full of razor wire and military checkpoints through impeachment. Impeachment may be doomed, but it provides another justification for extending a manufactured state of emergency. And if any violence does take place, that will extend the D.C. occupation.

Even Chief Justice Roberts, no friend of the Trump administration, has refused to preside over what he clearly doesn’t think is a legal presidential impeachment process. The same Democrats who universally voted for an unconstitutional 25th Amendment coup couldn’t care less. When you’ve got troops in the streets and control over the government, the law is what you make of it.

Those are high crimes and misdemeanors. Maybe the impeachers should impeach themselves.