In the name of equity, the SPLC announced that it’s shutting down its black nationalist hate groups category like the Nation of Islam. After “doing the internal work of anti-racism”, the SPLC will no longer list black racist hate groups because “the hate is not equal”.

Even racism requires its own equity. 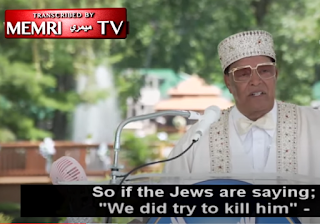 The SPLC’s move dismantles the last remaining shred of credibility of the organization, but it also comes after Democrat politicians and activists, including Senator Cory Booker and Kamala Harris pressured the FBI to stop monitoring black nationalist hate groups before several murderous antisemitic attacks by members of the Black Hebrew Israelite hate group.

Despite these terrorist attacks, the pressure is still on in the media and among Democrat activists to keep the FBI from monitoring black supremacist and nationalist hate groups.

Activists had targeted the SPLC because, despite its bias, untrustworthiness, and sloppiness, its listings are widely used by law enforcement and by internet platforms deciding what qualifies as a hate group. The SPLC’s statement mainstreaming black supremacist hate groups repeatedly attacks the FBI and claims that these groups are actually the victims of law enforcement.

It also argues that black nationalist hate groups “are not made up of only Black individuals”.

“We reject federal law enforcement’s false and misleading contention regarding threats from Black separatists,” the SPLC statement insists. It pads this out with woke buzzwords and intersectional jargon to dodge the simple fact that it’s legitimizing black racist hate groups.

The SPLC had formerly tracked black nationalist hate groups through a ‘separatist’ category because a number of them, including the Nation of Islam, have wanted their own apartheid state. In its statement, the SPLC insists that there’s nothing wrong with racial secessionism.

“Black separatism was born out of valid anger against very real historical and systemic oppression” the SPLC argues. In Elijah Muhammad’s Message to the Blackman in America, the Nation of Islam leader explained that separatism was needed because white people were racially inferior “devils” and that “separation must come between god’s people and the devil”.

“Reverend King has made it clear that he never wants the black man to rule, because he knows it will be ‘just as dangerous as white supremacy,'” Muhammad ranted. “This shows that all black people should disregard anything that a man like that says.”

The Democrats, the media, and the Southern Poverty Law Center have adopted Muhammad’s position over King’s position, rejecting the wrongness of black supremacism.

Democrat politicians like Senator Booker have insisted that black nationalist violence doesn’t exist. “You said both ends of the spectrum, as if there actually is a movement of black identity extremism: it’s almost creating this reality,” Booker had berated the head of the FBI.

Even the Southern Poverty Law Center isn’t ready to adopt Booker’s imaginary woke world in which a century of violence never happened and the Black Liberation Army, the Black Hebrew Israelite terror attack in Booker’s own state, the murder of 5 police officers in Dallas, the NOI and its splinter groups, like YBMB, and the murder of Malcolm X, never actually existed.

We live in a time when the murders of 8 people, the assaults on hundreds more, and the wrecking of communities to the tune of $2 billion by Black Lives Matter can be described as “mostly peaceful”. But even the SPLC’s new antiracist equity mandate hasn’t made the leap.

“The Jew is behind the integration movement, using the Negro as a tool,” Malcolm X, Muhammad’s disciple, had told the head of a local KKK group and a Democrat candidate.

The NOI’s racialist texts insist that America is evil because its immigrants “came from the lower class of European people” followed by Asian immigrants who created “one of the most mixed people” because they had “freedom to worship” and were not compelled to be Muslims.

The racism revisionists insist that black supremacists are fundamentally different than white supremacists, but they never explain how they’re different in their beliefs, only their root causes.

The Left swears by its sociology of root causes, but root excuses don’t change beliefs.

White supremacists and black supremacists have the same basic beliefs, they’ve worked together, and they have the same apartheid state goals. The only difference is that the Southern Poverty Law Center excuses one and attacks the other. That’s only defensible if you believe that some kinds of racism are justified while others are not, and that the only real racism is power.

And that’s what the SPLC falsely claims, “in our endeavor for racial justice and equity, it is imperative that we adopt an understanding of racism grounded in nuance and the realities of racial power dynamics. Racism in America is historical, systemic and structural.”

Spot the nuance and racial power dynamics in black nationalist Stokely Carmichael declaring that, “I’ve never admired a white man, but the greatest of them, to my mind, was Hitler.”

The SPLC’s Marxist critical race theory analysis of racism reduces it to power dynamics. Redefining racism as a “systemic” phenomenon replaces actual racism with renaming San Francisco schools that have acronyms to fight “white supremacy”. And then the SPLC can’t even pretend to be tracking hate groups, only those groups that it deems part of the system.

The absurdity of one of the wealthiest non-profits in the country (that has “poverty” in its name) pretending that the trailer park dwellers of the Klan represent “systemic racism” while insisting that Farrakhan, who got his photo taken with Obama at a Congressional Black Caucus event, is a helpless victim, takes the discrediting of what’s left the SPLC’s credibility to a new level.

The SPLC refuses to use the term “black nationalist” or “black supremacist” to describe black supremacist hate groups like the NOI which, literally, insist that they are the master race.

Elijah Muhammad’s Message to the Blackman in America laid out the creation story of the “white race” as coming from a mad scientist named Yakub who discovered there were “two people in him, and that one was black, the other brown” and “he could make the white, which he discovered was the weaker of the black germ” in a breeding program to make “brown” people.

Nation of Islam theology claims that “after the first 200 years, Mr. Yakub had done away with the black people, and all were brown. After another 200 years, he had us all yellow or red” and then finally “an all-pale white race of people” who were “made by nature a liar and a murderer”.

White people, Asians, and Indians, and most black people, according to black nationalists are illegitimate races, with white people, who are the least black, being the most evil.

This isn’t mere separatism. If that’s not racial supremacism, what is?

The Southern Poverty Law Center, founded by a Klansman’s lawyer, which has falsely accused many conservative organizations, including the David Horowitz Freedom Center, of racism has finally made its peace with racism in the name of antiracism.

Progressives Have a Marxist View of Truth