In his last year in office, Secretary of State John Kerry was touting the fact that he had traveled over 1.06 million miles and spent some 96 days in the air in the course of 3 years. The archived State Department site tallies Kerry’s total record at 1,417,576 miles and 126 days in the air.

Kerry spent more time flying in 3 years than the average American would in 50 years.

When the Air Force Boeing 757 which ferried Kerry around the world broke down for the fourth time, the media and the foreign policy establishment treated it as some sort of accomplishment. 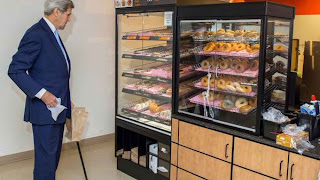 That might have amounted to something if the ketchup gigolo had done anything in that time except jet around the world to give speeches about the importance of not jetting around the world. Kerry kept racking up miles by flying to Morocco to address the 22nd UN Climate Change Conference, to Indonesia to deliver a speech denouncing unbelievers in global warming, and to Paris to warn that the earth was about to be destroyed if people didn’t stop living like him.

Kerry’s flights would have powered all the appliances in 50 American homes for a year.

“It’s the only choice for somebody like me who is traveling the world to win this battle,” Kerry recently retorted when a reporter asked him about flying his private jet to Iceland to receive an environmental award. Environmentalists don’t fly coach or even first class. They jet set.

Former Secretary of State John Kerry racked up 302 tons worth of CO2 emissions just from his flight time. Americans would have to burn 100 tons of coal to match the CO2 emissions from Kerry’s jaunts to save the world from people wanting to fly on vacation or heat their homes.

And as Biden’s new ‘Climate Envoy’, Kerry will soon be filling the sky with even more hot air.

Everyone from Moscow to the Middle East knew that Kerry was full of hot air, but not even they would have guessed that John Forbes Kerry was full of 302 tons of hot air. Don’t just think of Kerry as a politician, but as the Exxon Valdez with a “Save the Whales” sticker on the hull.

Biden’s ‘Climate Envoy’ recently argued that coal, oil, and gas workers needed to make better choices and make solar panels. In 2004, Kerry had won the endorsement of the United Mine Workers of America by promising to protect coal jobs. The UMWA didn’t even bother trying to endorse Biden, just as it didn’t try endorsing Obama or Hillary in 2012 and 2016.

The Democrats are militantly anti-coal now. Hillary Clinton had vowed to destroy coal and Kerry thinks coal miners ought to move to China and get jobs constructing toxic solar panels there.

But while the Democrats may be anti-coal, they’re pro-mansion and pro-private jet.

After the Obama regime ended, Kerry went back to using his own private jet to flit around the world, give speeches, and accept awards. Iceland was just one stop on the Kerry world tour.

And then it was back to one of his portfolio of mansions.

“Local sea levels are rising twice as fast as the global average,” Kerry claimed in 2015. Two years later, he and his wife bought a seven-bedroom waterfront house in Martha’s Vineyard.

Much like jetting everywhere, that’s just the sort of island property that a man who sincerely believes that global warming is causing the oceans to rise and flood the world would buy.

Kerry’s homes, like the jet set lifestyle, clash with his apocalyptic environmentalism.

“I don’t see it as all tragedy at all. I mean, yes, there will be tragedy associated with it. It’ll be hard for some people to give up homesteads and move away,” Kerry, speaking as Biden’s new “Climate Envoy”, argued. “So yes, life will be different, but it doesn’t have to be worse.”

Not when you can afford to pay for the carbon offsets the way that Kerry does.

It’s not easy being ‘green’. But you don’t have to be green, as Kerry told a reporter in Iceland, “if you offset your carbon, it’s the only choice for somebody like me.”

Paying someone else to be ‘green’, which is what carbon offsets amount to, is the modern equivalent of the Civil War practice of allowing the wealthy who were drafted to pay poor people to fight in their place. Life won’t be all that different for John Kerry, aside from giving up an estate on Nantucket for one on Martha’s Vineyard, because he’ll pay the poor to be green.

Trading coal for solar raises energy prices. Attaching carbon taxes to everything will make the cost of living impossible for millions. Air travel will become a thing of the past. For most.

“What I’m doing, almost full time,” Kerry whined in Iceland, “is working to win the battle on climate change, and in the end, if I offset and contribute my life to do this, I’m not going to be put on the defensive.” And it’s not as if any reporter outside Iceland would dare to even try.

John Forbes Kerry is flying around the world like Superman, fueled by hot air and carbon offsets, to save the world from the rest of us who irresponsibly drive to work and run our air conditioners without caring about the environment. While John Kerry goes through enough CO2 to cover 60 Americans driving their cars for a year because he cares about the environment.

All these years after Vietnam, Lt. Kerry, who collaborated with the Viet Cong to stop a war and launch a political career, is still destroying things to save them. And if these things, whether it’s the people of Vietnam or the planet, never get saved, he still gets rich and famous.

Meanwhile he emits enough CO2 to account for 100 tons of coal while fighting coal with jets.

When John Kerry first got the State Department gig under Obama, he divested a number of resources including millions worth of the Sustainable Technologies Fund which the media described only as a “green energy-oriented private equity firm” while leaving out a key detail.

Leaving out key details when it comes to the dealings of Democrats is the new journalism.

“The emergence of new policies and laws aimed at aligning our economic system of production with our environment’s carrying capacity,” STF’s site tells potential investors. “Understanding and predicting the desired goals of such policies is key to an optimal market strategy.”

The conflict of interest here didn’t go away with Kerry and his wife shedding their financial interest in Andre’s Swedish green energy fund. Much like jetting everywhere while lecturing the proles on setting their thermostat too high isn’t vaporized by carbon offsets.

“The time it takes me to get somewhere, I can’t sail across the ocean. I have to fly, meet with people and get things done,” Kerry argued. The rules never apply to the elites. They can’t. Not when those elites, like John Kerry, are saving us from ourselves by taking on the privileges that we are no longer allowed to exercise for ourselves in the name of the greater good of mankind.

And what sort of skeptic would begrudge the elites from jetting to save us from the jets?

Going ‘green’ is great when you’ve got private equity funds and private jets. It’s a lot less fun when you’re a British pensioner freezing to death in the winter or a French senior citizen dying of heatstroke due to the lack of air conditioning. Greenness means factory workers making $20K a year paying for the Teslas of upper class Californians. It’s oil and gas workers losing their jobs at the behest of environmental consultants pushing Chinese solar panels.

And it’s John Kerry flying a private jet to accept another award ten thousand miles away while emitting enough CO2 to heat an American home. If Biden still lets Americans heat their homes.