Liberal critics of critical race theory often act as if it’s a mysterious cult that emerged out of nowhere, while its conservative critics tie it to a history of academic Marxism. That’s true, but doesn’t explain why it has suddenly become so pervasively established in our culture. 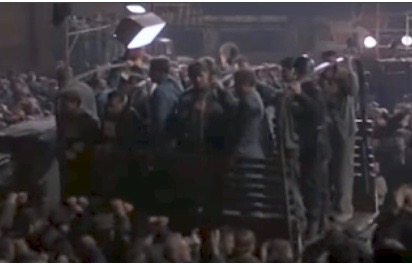 The resurrection of black nationalism and critical race theory are two faces of the same electoral strategy by a political movement now inextricably tied to black voters and white elites.

When Obama beat Hillary, he didn’t just transform America, he shed the last vestiges of the Democrat working class white vote and recreated the party as a coalition of urban elites, immigrants, and minority voters on the model of Tony Blair’s Labour Party in the UK. This “neo-liberalism”, as lefties like to call it, found its own Corbyn in the form of Bernie Sanders who put on a show of attacking the white urban elites who dominate a former working class party.

The Obama strategy traded the working class white vote for increased black and minority turnout. Since Hispanic voters are much less politically reliable than white voters, the Democrat electoral strategy narrowed down to maximizing black voter turnout. When black voter turnout faltered, as it did in 2016, the Democrats took a beating. But in 2020, black voters made Biden the nominee over Bernie even though he was backed by a majority of white and Hispanic Dems.

Then they handed Democrats control of the Senate.

Obama had initially portrayed his candidacy in MLK terms as ushering in a new post-racial era of national harmony. Then, once in office, he pivoted to the old black nationalism of his mentor, Jeremiah Wright, using his office as a platform for falsely accusing America of racism.

The rise of the Black Lives Matter movement, under the guiding hand of the Obama administration, touched off race riots around election years to generate black voter turnout. Midterm elections usually bring out more white than black voters. The race riots were meant to change that by compensating for Tea Party populism with a new black nationalist movement.

The race riots manufactured a national racial crisis to boost voter turnout by making black people feel threatened and to silence the middle class and white lefties threatened by the steady flow of jobs out of the country, and the concentration of power in a leftist oligarchy.

Working class concerns about open borders and immigration had been dropped by the Democrats even before they officially dropped the working class vote. Bill Clinton, Blair’s political peer, bluntly told working class Democrats that the jobs were not coming back, and that they needed to send their children to college, change their culture, and join the new elite.

But college was no longer a reliable ladder into a shrinking middle class. A generation had been told that they needed “computer literacy” to function in a new economy, but by the time “learn to code” became a taunt, the tech industry was offshoring and importing cheap immigrant labor.

By the end of Obama’s time in office, the American software engineer was on the same pathway as the American factory worker, tasked with training his foreign replacement before being fired.

The new economy was heavily administrative. It would cheerfully offshore manufacturing and engineering jobs, but not the diversity specialists and managers serving as political commissars. White male jobs that depended on skill and reliability became endangered, while jobs in which fitting in at an office was more important than traditional work skills became more reliable bets.

Critical race theory became the damoclean sword hanging over the heads of the suburban middle class. Like Orwell’s 1984, the members of this ‘middle party’ were bludgeoned with a campaign of political terror so that they wouldn’t have time to think about the system they were administering. The political enunchization of the administrative middle class had the same function in Orwell’s fictional dystopia and in the entirely real dystopias across the country.

The new elites are unconcerned with the proles laboring over the actual product, but deeply worry about the political reliability of the administrative class that is their means of control. They don’t care what the workers believe because they earn too little and there’s little leverage over them, but they are obsessed with maintaining their power through the administrative class.

Critical race theory had its moment at the perfect time to offer sinecures to its own organizer class who were being embedded into every workplace in the country. But it also warned the suburban middle class to avoid being seduced by President Trump’s economic populism. The political interrogations of the struggle sessions suppressed any questions about the country.

It also shut down the leftist insurgency. When Bernie Sanders first ran against Hillary, he rejected identity politics and open borders. After a campaign of harassment by black nationalist activists with puppet strings going back to the Democrat establishment, Sanders became an even bigger enthusiast of racial tribalism and illegal migration than Hillary had ever been.

That cut him off from the working class white vote and cost him any shot at the White House.

The future of his movement was outsourced to the identity politics populism of Rep. Alexandria Ocasio Cortez and the Squad for whom racial tribalism comes ahead of economic populism.

Intersectionality prioritizes racial Marxism over economic Marxism. Elements of the Left have rebelled against the political correctness and cancel culture of racial Marxism, but in a political culture where AOC is the face of the populist Left and Bernie gets to appear in memes, the audience for the non-racial Marxism of the alumni of The Intercept is limited to conservatives.

Meanwhile, critical race theory is doing what it’s supposed to do by polarizing America along tribal racial lines and along class lines among white people. White suburban moms attend book clubs discussing White Fragility and other critical race theory texts as a form of networking. Having the right politics is crucial to your career in a variety of fields. Not all of the signs asserting that in this house the inhabitants believe in science, love, and black nationalism, are voluntary statements of belief. They’re people flying the new post-American tribal flag to fit in.

Black turnout has been crucial in some races, but it hasn’t made up for Democrat losses. It’s why Democrats took such a beating in local races once again in 2020. Mark Zuckerberg and the Democrat donor class can throw a fortune at only some races. And without the massive infusions of cash, the Democrats are more likely to lose locally in much of the country.

Democrats weaponized critical race theory to play on the insecurities of a shaky suburban middle class. While manufacturing workers may fear that their jobs are about to be sent to China, suburban middle class office workers have come to fear being stigmatized for violating the confusing and incomprehensible dogma of the new antiracism.

The secret of brainwashing is that the best way to feign belief in something is to believe it.

Republicans had won over working class whites by taking on China’s economic warfare, open borders migration, and offshoring jobs. But the critiques of political indoctrination and cancel culture were largely limited to rhetoric. President Trump’s executive order trying to root out critical race theory from federal workplaces and federal contractors was mostly ignored.

An Obama judge blocked it and Biden reversed it, while calling for “unity and healing”.

Republicans have failed to reckon with critical race theory, not just as a set of ideas to rail against, but as an electoral reality. The Obama administration had understood that there would be a price to pay for jettisoning the white working class and replaced it with a new coalition. That new coalition depended on capturing the Republican suburban white base through political indoctrination and repression crowdsourced not just through social media, but workplaces.

The last two elections showed off the emergence of a new coalition between white elites and minorities which uses critical race theory as a ladder offering admission to the middle class.

Affirmative action and cancel culture are the twin doors governing access to the middle class.

Republican populism championed farmers, engineers and workers threatened by globalism, but it’s also going to have to take on the cause of a suburban middle class threatened by forces much closer to home, not with mere rhetoric, but with real policies and real consequences.

This is the new civil rights movement.

If Republicans rise to that fight, because it’s the right thing to do, they will also strike at the electoral axis of the new Democrat coalition with a new civil rights movement.

The Democrats haven’t built this weapon of political terror because they just felt like it. Nor did they decide to do all this because of something an academic once wrote in a book. It’s not a random ideology, but a sophisticated strategy for winning elections and controlling the country.

When President Trump took on immigration, he connected with millions of people who felt cut off and fueled a new Republican wave. But he didn’t do it just with talk, but with action. He promised to build a wall, to ban terror travel, and to implement specific policies and and results.

That’s what a new civil rights movement needs to connect with millions more who feel cut off.

Republicans took on open borders. That battle isn’t over. But if they don’t take on critical race theory, the Democrats will use their new coalition to turn America into Europe: a nation of sullen former workers in the Rust Belt, and frightened middle class urban workers, just trying to fit in, while remaining subservient to an expert class fighting ideological crises as the nation is destroyed.

Barry Shaw: Another Day and Still No Phone Call From Biden to Israel

Progressives Have a Marxist View of Truth