When a video of an assault on a 91-year-old Asian man went viral, the media and civil rights groups were quick to blame President Trump for using the term, “Chinese Virus”.

“We stand with our Asian American & Pacific Islander community against the rising tide of racism and hate crimes that have been stoked to a fever pitch, much of amplified by the actions of our last president,” Rep. Alexandria Ocasio Cortez tweeted another false accusation.

But when the perpetrator was arrested, he turned out to be Muslim.

Yahya Muslim had allegedly attacked a 60-year-old man and a 55-year-old woman the same day. His arrest told a larger story about why Asian people are really being attacked in Oakland. 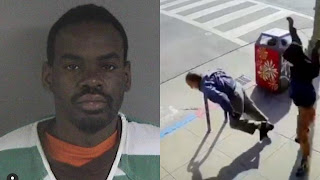 Muslim had been convicted of “assault with force likely to produce great bodily injury” in October 14, 2020 and was let off with an “unsentenced term”. He had also been convicted of the same charge in 2015 and got off with probation. Had he been locked up, the 91-year-old man he attacked would have been safe. California’s Democrat establishment and its media allies falsely blamed Trump for their own support for criminals like Muslim at the expense of their victims.

Oakland’s Chinatown had suffered over 20 attacks against the elderly and women in two weeks.

The wave of attacks against Asian people in Oakland, like the previous attacks in New York that I documented, are being carried out by minorities with a criminal record, not by conservatives.

The cause of the crisis is a crime wave fueled by Democrat support for career criminals.

California Democrats legalized shoplifting. Some of the videos capture criminals boldly stealing money and property from stores while knowing that nothing is going to happen to them.

Some of the criminals escalated their attacks from robbing stores to mugging the elderly. And the same Democrat politicians who supported legalizing robbing stores expressed concern.

But when Democrat DAs free criminals as soon as they’re arrested, when they even bother arresting them at all, when someone like Yahya Muslim could be convicted twice of “assault with force likely to produce great bodily injury” without ever serving time, that’s inevitable.

In January, there were 15 murders in Oakland, up from only one murder in January of last year.

The Oakland City Council had voted to create a task force to defund the police department by half. The actual defunding proposal was narrowly voted down with Councilwoman Sheng Thao voting for defunding. A month later, after a murder at a Starbucks, Thao was calling for the police to walk the beat again.

“Let’s commit to shifting at least $25 million from OPD to community programs and services that truly keep us safe,” Councilwoman Nikki Fortunato Bas had argued.

“We need to invest in those other types of safety,” Rep. Alexandria Ocasio Cortez had argued in favor of police defunding.

How safe does anyone in Chinatown feel?

Biden’s spokeswoman, Jen Psaki, told reporters at a briefing that her boss was very concerned and had signed an executive order protecting Asians. That won’t do much good because Kristen Clarke, Biden’s black nationalist pick to head civil rights at the DOJ, opposed fighting civil rights violations by black perpetrators. That would include Muslim and most of the Oakland attackers.

Before Muslim’s arrest, John C. Yang, the head of Asian Americans Advancing Justice (AAJC), a leftist group, had been one of the loudest voices blaming President Trump.

The AAJC, like its Jewish counterparts, has worked to sell out the people it claims to represent for leftist causes, supporting Yale’s policy of affirmative action discrimination against Asian students, and now opposes police protection for the Asian-American victims of crime.

In response to the wave of attacks, Yang claimed that, “increased police presence isn’t necessarily going to solve the problem” and claimed to be worried “about over-criminalization of communities,” calling instead for “community-based solutions, assistance for the victims, assistance for the businesses that are damaged.” Anything except dealing with the criminals.

Meanwhile local business owners are hiring armed guards, forming volunteer patrols, and calling for a larger police presence. The disconnect between what Asian store owners in Oakland actually want and the media’s insistence on quoting Yang amplifies the disconnect.

Chinatown community members have been accused of “anti-blackness” for talking about the violence they’re facing in a city and state that no longer believe in fighting crime.

In San Francisco, Vicha Ratanapakdee, an 84-year-old Thai man, was murdered in San Francisco by Antoine Watson who shoved him, causing the elderly man to hit his head, and then kept going. The victim’s family described it as a racially motivated assault.

Soros DA Chesa Boudin promised them justice. Considering that Boudin’s idea of justice is freeing all the criminals, that’s not very likely. A local news station reported that 85% of San Francisco residents said that they feel unsafe. Boudin and the pro-crime policies of criminal justice reform, which put criminals ahead of their victims, are a big part of the problem.

Even while CNN, CBS, NBC, and other major media outlets falsely tried to connect President Trump to the attacks, it’s their own political movement that is at fault for the violence.

“The perpetrator in some cases has been African American,” San Francisco Mayor London Breed said. “And as an African American woman, as the mayor of your city, I am here to hold everyone accountable.”

Accountability has become a nebulous social justice term. It’s wormed its way into cancel culture and has been used to describerestorative justice alternatives to the justice system.

What is happening to Asians in Oakland is the same thing that’s been happening to Jews in Brooklyn. The long series of viral videos showing random assaults and muggings against both groups is the result of living under Democrat leaders who have decided that crime and racism by minorities don’t exist and that policing them is racist.

There would be no rash of assaults if the DAs and the police were allowed to do their job.

Democrats love talking about hate crimes, but there’s no ‘hate crime’ without a ‘crime’. Fighting hate without fighting crime leads to lots of press conferences and not a whole lot less.

The social justice activists, reporters, and politicians who jumped on the Oakland assaults tried to blame President Trump, but when the perpetrators turned out to be exactly the same people on whose behalf they had been fighting for years, they quickly backed away from the issue.

Rep. Alexandria Ocasio Cortez tried to blame President Trump for the attacks on elderly Asians in a city whose politicians did their best to champion police defunding. If she wants someone to blame for the wave of crime against a vulnerable community, she can look in the mirror.